Sumo and Pokemon have collided 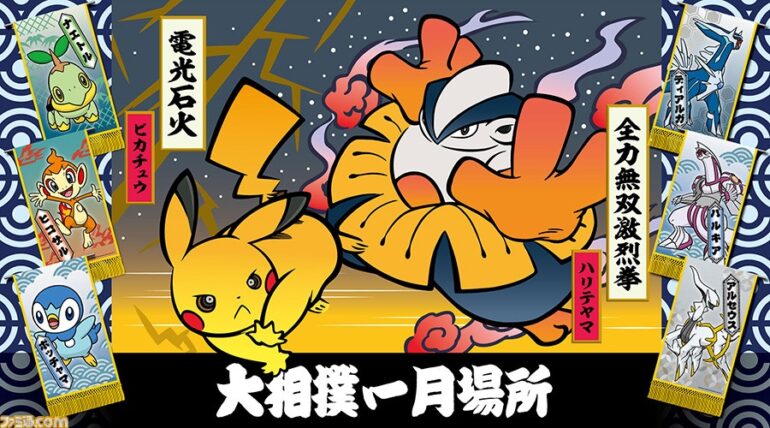 The Pokemon Company has announced a collaboration with the Japan Sumo Association, with packages of the Pokemon series being drawn at the Grand Sumo January venue held at Ryogoku Kokugikan from January 9th to January 23rd, 2022. With the cooperation of the Japan Sumo Association, they will implement a number of collaborative efforts that combine the appeal of both Pokemon and sumo.

More than 200 Pokemon sweepstakes will appear during the Sumo New Year Basho. In addition, a make-up mawashi designed with the motif of a prize flag and Pokemon depicting successive packages of the game “Pokemon” series will be exhibited at the Ryogoku Kokugikan.

During the Sumo New Year Basho, more than 200 Pokemon Sweepstakes flags with different designs will appear every day to liven up the venue. Each of these flags will feature the starter Pokemons that appeared in Pokemon Brilliant Diamond and Shinning Pearl.

An exhibition related to Pokemon will be held as well at the Ryogoku Kokugikan. Pokemon’s original design make-up turn, and the prize flag depicting the successive packages of the game “Pokemon” series that appeared in November 3rd year of Reiwa and the package of ” Pokémon LEGENDS Arceus.”

In commemoration of this collaboration, a specially designed Gyoji costume related to Pokemon will appear.