How to Upgrade the Pickaxe in Disney Dreamlight Valley

Learn how to make your pickaxe stronger with these quests. 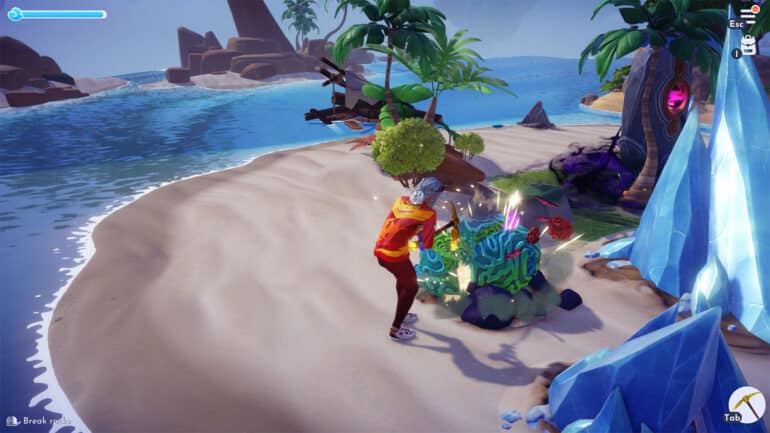 The Magical Pickaxe is a tool given to players to help in breaking rocks and mining for minerals in Dreamlight Valley. But its magic only makes it indestructible as it cannot break other stuff harder than rocks such as sea debris.

Sea Debris are the colorful rocks and corals that got washed up on the shores of Dazzle Beach. Despite how nice they look like as an added decor on the beach, some of these sea debris just need to go as they are either blocking a path or a treasure chest is stuck within them. They cannot be broken by the standard pickaxe, so there has to be a way to upgrade it to make it strong enough to break sea debris.

In this guide, we will talk about how to upgrade the Pickaxe in Disney Dreamlight Valley.

How to upgrade the Pickaxe in Disney Dreamlight Valley

The pickaxe can be upgraded several times by completing character quests. Each upgrade will allow you to break harder rocks and materials that can be found around Dreamlight Valley.

To upgrade the pickaxe, you must first unlock Moana’s Realm so that you can interact with Maui who will be the one upgrading your pickaxe. While completing the quest to unlock Moana, Maui will upgrade your pickaxe for the first time, allowing it to destroy small sea debris that surround Moana’s canoe. The pickaxe can still be used on these small sea debris after completing the quest.

To upgrade the pickaxe for the second time, you will need to bring over Maui to the valley as one of its residents, complete his first quest for coconuts, and raise your friendship level with him to level 4. He will then make the quest “A Tale of Stone and Fire” available for you. As part of this quest, Maui will happily upgrade your pickaxe once again after completing some tasks.

Head back to Moana’s Realm and look for the basket near the canoe. Inside the basket are some seafood and 5 scraping stones free for you to take. Bring back the stones to Maui and he will give you another task.

Maui will ask you to prepare a 5-star meal for him. You can make any 5-star meal like a Bouillabaisse or a Ratatouille from readily available ingredients if you have not unlocked Chez Remy yet. Afterwards, bring the dish over to Maui.

Maui will then upgrade your pickaxe which will make it strong enough to break sea debris. He will then ask you to break a particular debris where you will get a piece of sandstone. From this point, you can already use your pickaxe to destroy the other sea debris in the area, or you can continue completing the quest to craft the Granite Fire Bowl.

The third upgrade allows you to break the huge ice crystals that can be found near the Icy Cove at the Forest of Valor. In order to unlock the quest for this upgrade, you must first invite both Anna and Elsa over to the valley. Once Elsa arrives in the village, talk to her and she will bring you over to the ice crystals that block the Icy Cove. After trying and failing to break the crystals with your pickaxe, she suggests to upgrade your pickaxe with something that makes it hot the the “Breaking the Ice” quest.

You will then be asked to create a Warmth of Summer Potion using the following ingredients:

Use a crafting station to craft the potion under the Potion & Enchantment category. Once the potion is made, head back to Elsa and she will help you apply the potion on the pickaxe. Afterwards, you can then use the pickaxe to break the ice crystals. From this point, you can continue on with the Breaking the Ice quest by clearing the Icy Cover from more ice crystals and putting the blue crest on the sculpted wall.

The fourth upgrade allows you to break much larger ice crystals that are found in the Frosted Heights and the ones that suddenly appear in the Icy Cave. For this upgrade, you need to complete all Elsa’s friendship quests until you reach friendship level 6 with her, which will unlock “The Singing Ice” quest. She will need your help in crafting the Cold of Winter Potion to put on your pickaxe to enable it to break the larger ice crystals.

First off, you will need to make the Icy Bouquet using these flowers:

After giving the flowers to Elsa, she will then give you the rest of the ingredients to craft the potion:

Craft the potion from the Potions & Enchantments category from a crafting station and then talk back to Elsa to get the pickaxe upgraded.