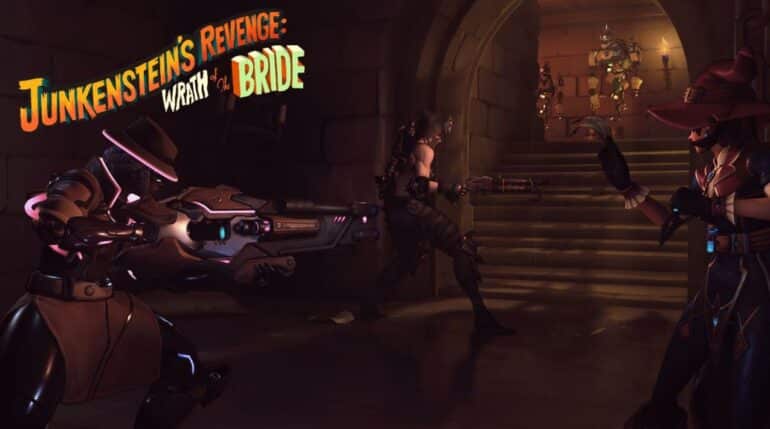 Junkerstein’s Revenge: Wrath of the Bride has several stages that you need to complete before progressing. As you progress through the PVE content, you will be fighting against bosses who will give you a tough time if you coordinate.

In Junkerstein’s Revenge: Wrath of the Bride, you’re only able to take control of four Overwatch 2 characters and not the entire roster. You have your Tank, two Damage, and a single Support.

Aside from those four, you’re not able to play as anyone else in Wrath of the Bride. However, they’re already wearing their Halloween costumes for the occasion. Pick one of them and play them according to their strengths.

One important thing to note about this PVE mode is that you will fail it if all four in your team are downed at the same time in a single run. However, you will be able to pick up teammates from their downed state after a short timer so they can keep going.

Junkerstein’s Revenge: Wrath of the Bride can be divided into different sections. We’ll give you a step-by-step walkthrough of what to do in each one. Keep reading this article for more information.

Meet at The Tavern

The moment you start up Junkerstein’s Revenge: Wrath of the Bride, you will be separated from your teammates. You won’t be too far away from each other but you will be asked to meet at the Tavern in the starting area of Eichenwalde. A horde of Zomnics patrolling the streets will be the main thing trying to stop you.

The crucial aspect of the first part of the game is Kiriko. As the Support, she needs to utilize Swift Step to get close enough to her allies to heal them. Since everyone is separated, regrouping on the streets even before hitting the tavern can be crucial.

Once you’ve stepped inside the pub, you’ll be treated to some story bits to get an understanding of what’s happening in Junkerstein’s Revenge: Wrath of the Bride. Afterwards, the game tasks you with reaching the castle and fighting through a horde of Zomnics guarding the streets.

Banshee Moira will be the first boss encounter in the mission. Whoever grabs the key from one of the rooms gets a jumpscare from her. You’ll then fight her on the streets on your way to the castle and she’s being guarded by Zomnics who can do some serious damage.

The best way to fight Banshee Moira is to focus on her Zomnics before her. Those blue enemies can be really annoying during your fight and taking care of them puts Moira in a serious disadvantage. Without the blue Zomnics, Banshee Moira isn’t really much of a threat and can be quickly taken down.

After defeating Moira and grabbing the key, you’ll be making your way closer to the castle where you’ll be ambushed by multiple Gargoyle Winstons and even more Zomnics. The prospect of fighting two Winstons at the same time might be a horrifying thought but thankfully it’s manageable if you do it right.

During the first phase of the fight, have Junker Queen take the brunt of the damage with Kiriko providing healing support. Ashe and Sojourn should focus on eliminating the blue Zomnics above that are sniping your team. Once their out, have your team focus on taking down one Gargoyle Winston before moving to the next one.

One should be careful when fighting the Gargoyle Winstons up close. They can really hit hard and unless you’re Junker Queen, you really want to keep some distance. After your fight with the Winstons, make sure to let Kiriko heal the team and then make your way forward.

In the Castle Dungeons, you’ll encounter a boss fight with Marionette Echoes in a dream sequence once you interact with the torches. There are several Echoes in the room you’ll be fighting in who will come to life one at a time to fight you.

The challenging part about the Marionette Echoes boss fight is that the area is dark and they can often attack you before you see them. Thankfully there are platforms above the grandfather clock towers that Sojourn, Ashe, and Kiriko will be able to get to. This will let them more easily identify where Echoes is in the room.

The Marionette Echoes isn’t as tough as the Gargoyle Winstons, so dispatching her shouldn’t be challenging. You simply have to utilize your pings to get your team to focus fire on her as soon as she’s spotted.

The moment you reach the castle gates, a boss fight against Summoner Symmetra and another Gargoyle Winston will ensue. While the duo seems like an intimidating prospect to fight against, you can quickly take care of Summoner Symmetra before she can drop her turrets as her habit of staying still makes for easy headshots.

The only real challenge in this fight is against Gargoyle Winston and the Zomnics. There are only a handful of Zomnics in this fight but they can be annoying to deal with Winston closing in.

Once you enter the Castle, you’ll quickly encounter the Unstoppable Ghost. It’s actually Sigma, but you can’t damage him at all in Junkerstein’s Revenge: Wrath of the Bride. Your only option is to escape him because he will damage you if you come too close.

Sigma has a force field around him that will damage you as he slowly approaches your position. He’s able to phase through walls and does a lot of damage when he catches up to you so Kiriko will be very useful here. The biggest thing you have to worry about is dealing with the Zomnics who are on your path to safety, sandwiching you between them and Sigma. Keep running until you’re out of his clutches.

A little after escaping Sigma, the Experiment Bastion will burst through the corridor in his minigun form. During this form, he’s hard to damage and the tight corridor means you and your team will be hit pretty hard.

The best way to beat Bastion is by waiting out his turret form before attacking. You are able to dodge his shots by constantly jumping side-to-side until he reverts back. Once Bastion goes back into his normal form, pile on him defeating him easily.

Bride Sombra is the final boss of Junkerstein’s Revenge: Wrath of the Bride. She will send plenty of Zomnics to stop you, but the real problem of this fight is that Sombra will continuously appear to pull the switch that zaps away Reinhardt’s health. If that reaches zero, you fail which is why it’s important to attack her as soon as she appears.

When Bride Sombra isn’t anywhere near the switches, she will throw her Translocator and start shooting. Destroy the device before hitting her so Sombra doesn’t teleport away. Just ensure that you’re not being overwhelmed by the Zomnics that will rush at you during the fight.

Eventually, Bride Sombra will call Sigma, Bastion, and Shock Tires to help her. You should focus on taking out Bastion and Shock Tires as fast as possible, even using your Ultimates if you have to. However, whoever is being chased by Sigma should run as far as possible from the team as he is completely invulnerable to attacks.

Sombra will constantly move around between switches in the area which make it difficult to track her. Thankfully, one hero in your team will automatically notify everyone when Sombra is on a switch. Eventually, Bride Sombra will go down after her health is depleted. Congratulations, you’ve completed Junkerstein’s Revenge: Wrath of the Bride.

That’s everything for how to beat Junkerstein’s Revenge Wrath of the Bride in Overwatch 2. We hope this article was informative. For more on Overwatch 2, you’re already in the right place.

Check out this Youtube video from whitey bay who shows the entire mission of Junkerstein’s Revenge Wrath of the Bride in Overwatch 2.