New Details about Koraidon and Miraidon in Pokémon Scarlet and Violet 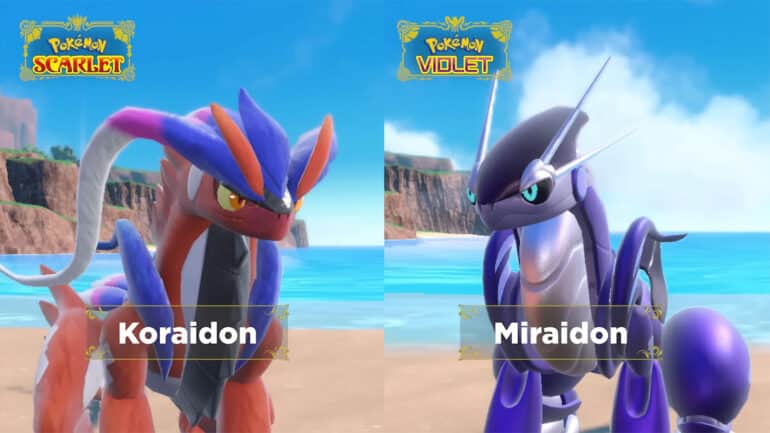 New details about Legendary Pokémon Koraidon and Miraidon have been revealed in the latest teaser of Pokémon Scarlet and Violet. Most of these details are about their traversal abilities that will help players travel across Paldea. We’ll take a look at these new abilities, as well as some details that might have been hinted in the teasers about how these legendaries will be obtained.

Koraidon’s Sprinting Build and Miraidon’s Drive Mode are basically their default land forms when traveling on ground terrain. In this form, Koraidon and Miraidon both puff up their throats and curl their tails to form wheels. However, Koraidon does not use them as wheels and instead, it uses its limbs to gallop. While in this form, they can jump and scale up walls using their limbs.

Koraidon’s Swimming Build and Miraidon’s Aquatic Mode are their water forms when traveling on any bodies of water. Both Koraidon and Miraidon assume the same position as in their land forms as they go across the surface of lakes, rivers, and seas. In this form, Koraidon reveals membranes in between its middle digits to help with the paddling, while Miraidon uses its thrusters to propel itself forward. It may also be possible that they can leap in the air while swimming.

Koraidon’s Gliding Build and Miraidon’s Glide Mode are their air forms when traveling through the skies. While in the air, Koraidon will unravel its head tendrils to reveal its wings, while Miraidon will extend its antennae to reveal a wide membrane that will form its wings. As the names imply, Koraidon and Miraidon can only glide in this form and will have to start off from a high elevation to be able to glide down; they will not be able to flap their wings to go higher once they are in the air.

Where to get Koraidon and Miraidon

Will all the forms be accessible right away?

There are no official details yet if the water and air forms will be useable by Koraidon and Miraidon as soon as you meet them, but there is a possibility for it given that Paldea is designed to be an open world map. It is also possible that the other two forms will not be accessible until they are both taught to the legendaries, similar to how an HM move works.

Check out the World Overview video from The Official Pokémon YouTube channel where we get to see the new forms in action: