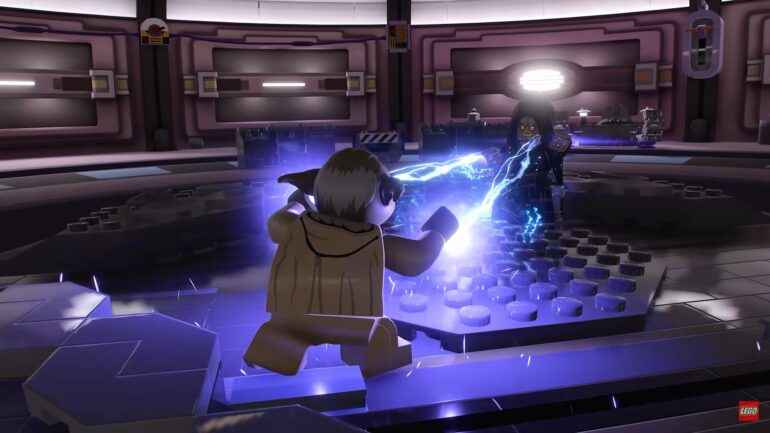 LEGO Star Wars: The Skywalker Saga has a wide variety of skills and upgrades that can be unlocked, but some are more beneficial than others. It’s possible to access upgrades in the game menu, and there are ten different skill categories to choose from.

Every character, regardless of class, is affected by the core upgrades. The rest of the upgrades are divided into groups, so only certain characters can benefit from them.

Even if the skill tree system in The Skywalker Saga isn’t as extensive as those seen in most recent games, the LEGO Star Wars games themselves were never all that challenging to begin with anyhow.  When it comes to character progression, The Skywalker Saga offers a variety of class upgrades that add a little spice to the fighting and allow you to feel like you’ve progressed further than simply completing the game’s tale and finding trinkets.

How to Upgrade Characters in LEGO Star Wars The Skywalker Saga

With enough Studs and Kyber Bricks in your inventory, you can upgrade your character by opening the “Upgrades” tab in the main menu and clicking on “Upgrade.” From there, you can access all of the game’s upgrades, which are organized sequentially by character class.

In LEGO Star Wars: The Skywalker Saga, upgrading your character costs Studs and Kyber Bricks. By this point, the little LEGO components known as Studs have become an integral part of the series, but Kyber Bricks are something new. After achieving certain tasks, meeting certain level criteria, or just by finding them in the game’s many hub sections are special blue LEGO bricks that you can collect.

In LEGO Star Wars: The Skywalker Saga, we’ve put together a comprehensive guide on how to quickly earn upgrades.

Every character in the game can benefit from these LEGO Star Wars: The Skywalker Saga Core Upgrades at any moment. However, if you prefer a more customized experience, you can turn each one off one at a time in the settings. In order to get the most out of your Stud collection, we recommend unlocking the following:

In order to progress through the story, these abilities will be useful. For the most part, upgrades that raise a character’s health are included in the “core” upgrade category. To move on to the next row, players must first complete the row they are currently in. Collectible Detector can only be unlocked if users purchase the necessary skills. As you go through the Collectible Detector’s levels, the Kyber Bricks will become more visible, making it easier for you to collect them and get access to new upgrades.

These LEGO Star Wars: The Skywalker Saga Class Upgrades only apply to characters within respective class. Check out our All Character Classes and Abilities Guide Here.

Enhancing one’s ability and increasing the enjoyment of one’s actions are two of its major purposes. While playing, we recommend you purchase these class upgrades:

In LEGO Star Wars, the Jedi are recognized for their powerful offensive abilities. There is no limit to how much damage the Jedi can do with their lightsabers. Additionally, they may use their strength to throw a variety of objects with great force.

Here are some of the best Jedi Skills:

The powerful force strikes of the Jedi class are well-known across the galaxy. You can deal a lot more damage with things hurled with force if you level up your Force Flinger skill. The damage of the Force Flinger can be considerably increased by upgrading it three times.

You must learn how to counter parry assaults in order to employ Jedi reflexes more effectively. Increases the damage done by counterattacks, which inflicts a great amount of damage on all the foes in the immediate vicinity. For huge damage, this talent has three tiers that can be upgraded.

With the use of the Grapple Blasters, the Hero class character is able to grab and drag objects towards themselves. Additionally, the Hero class has the ability to disguise themselves as various enemy characters. Defense and healing are the main focus of their skills. It’s a good class for beginners who prefer to keep things simple.

Here are some of the best Hero Skills:

Armoured Disguise can dramatically increase the defense of your hero class in combat, making them even stronger. With Armoured Disguise, your hero characters would absorb substantially less damage, allowing them to survive longer in difficult encounters. Maximize your efficacy by completing the skill’s third tier upgrade.

You can heal your character during combat with the use of the Rebel Heart skill, which increases the chance of recovery hearts being dropped after defeating an enemy. You can use this ability to replenish your character’s health in the middle of a combat.

In terms of powers, the Dark side class is very similar to the Jedi class. They are able to use the force to inflict severe damage. In addition, they employ lightsabers like the Jedi class to deal considerable melee damage. NPCs can be made to panic and their minds manipulated by members of the Dark side.

Here are some of the best Dark Side Skills:

Fear the Dark Side

The Dark Side class’s Fear the Dark Side ability can make NPCs afraid, causing them to flee further away from the character’s current location. It is suggested to upgrade this skill to 3 Tiers, especially if you wish to scare away the adversaries and prevent unnecessary conflict.

The ability to deal massive damage to all nearby adversaries with a single Power Push is one of the game’s most powerful. The skill would throw back all adjacent foes with the power of force and would inflict massive damage. Upgrade the talent to the third tier, and you’ll be able to do even more damage with this already devastating move.

The abilities of the Astromech Droid class allow it to fill a variety of support roles. They can inflict massive damage with shockwave assaults while distracting their opponents with holograms. You can make good use of their combat abilities.

Here are some of the best Astromech Droid Skills:

While your opponents are distracted, you can easily strike them with the help of the amazing support skill known as Distraction. This skill would summon up a Hologram that will keep the adversaries distracted if you do not wish to engage in combat. There are three tiers to this skill.

The Super-Charged skill can do immense damage to the adversaries; the skill can stun your enemies, thus it that can benefit you during combat. The talent would also release tremendous shockwaves. You can increase the Skill to 3 tiers for maximum damage.

The Bounty Hunter, known for its ability to identify and detect diverse adversaries, so you can beat them quickly. The enemy’s shields are rendered worthless, and you are able to deal massive damage to your opponents.

Here are some of the best Bounty Hunter Skills:

You can use the studs you earn through the Hidden Bounties talent to purchase various items and collectibles. This skill would allow you to earn a lot of Studs from all vanquished enemy, making it easier and less tiresome for the player. You can increase the skill to 3 tiers for maximum effect.

Scattershot is a powerful attack that may do massive damage to all foes in its path. The Bounty Hunter would hurl various bullets in the air, which would hurt all adjacent opponents considerably upon hit. You can increase this talent to 3 tiers for maximum damage and a broader range enhancing its use of this skill.

There are a lot of mechs and robots in this class, and they can deal a lot of damage. In addition to their deadly shockwave assaults, the Protocol Droid class has the ability to fire bolts at their opponents. The Droid class has a variety of skills that make it an intriguing choice.

Here are some of the best Protocol Droid Skills:

One of the most impressive skills in the game is Polished Plating, which can deflect a wide variety of strikes from the enemy. This skill can protect you from the bolts that the enemies would shoot your way. Upgrade the skill to three stages for maximum effect.

One of the most dangerous skill in the game, the Destructive Disassembly is capable of destroying everything in its path. This ability sends a strong shockwave out every time you disassemble an enemy. For maximum damage, this talent should be upgraded three times.

Scavengers have great glide and climbing abilities that allow them to traverse large areas, making them ideal for exploration. Also, they can use their breaker blaster to devastate the enemy.

Here are some of the best Scavenger Skills:

In the exploration of the galaxy, this skill would be useful. New destinations would become considerably more accessible to you as a result. Your character’s exploration potential would be boosted by the addition of an Expert Climber to their roster.

Having a more powerful Breaker Blaster would increase its range and damage. This ability would greatly enhance the effectiveness of the Breaker Blaster ability in combat, allowing you to take out a larger number of foes with ease. Even if you’re not looking to do much damage, it’s one of the best skills in the game.

At long range, the Scoundrel class is superb. This class is well-known for its devastating long-range attacks that can wipe out whole teams.

Here are some of the best Scoundrel Skills:

The Scoundrel class would launch a barrage of ranged attacks on the foes in close proximity, dealing massive damage to them. With fatal ranged assaults, this skill can pierce through the opponents’ defenses. You can level up this skill to three tiers in order to improve the amount of damage dealt by the Piercing Rounds ability.

The class of villains has a diverse set of abilities that can let them deal massive damage to their foes. It is possible for them to assist the other players in fight by using their special abilities found in their skill tree.

Here are some of the best Villain Skills:

The Extra Ammo skill can help you in fight if you are having problems managing your ammunition. When you retrieve weapons from the drop boxes, you’ll be able to carry extra ammo in them. Having more ammunition would allow you to keep using your weapon for a longer period of time, especially in long-running battles. This is one of the best abilities in LEGO Star Wars: The Skywalker Saga to level up, therefore do so all the way to level three.

While playing LEGO Star Wars, if you’re having trouble in combat, you can summon a Droid to help you out! As a result of this assistance, battle will be considerably easier and more exciting for the player. There are three levels of training remote upgrade available.