A guide on how to unlock all playable characters in the Federal District in LEGO Star Wars The Skywalker Saga. 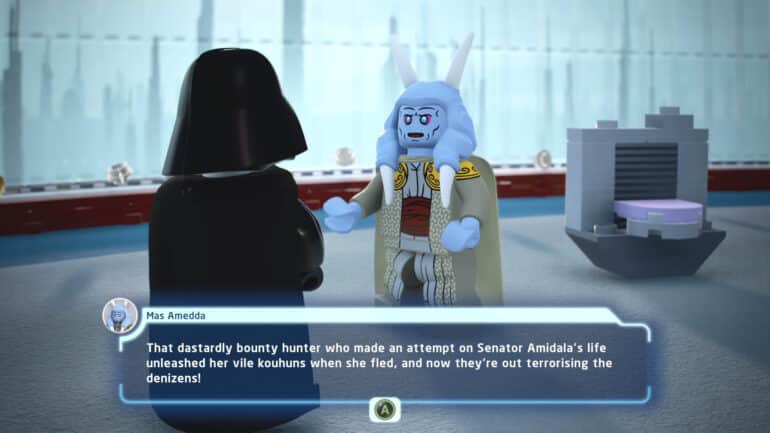 The Federal District in LEGO Star Wars: The Skywalker Saga is a well-established district in the planet of Coruscant where very important matters happen almost all the time. It is considered as a core center of all decision-making in the galaxy until its fall during the rule of the New Order. With all the events that happened in the Federal District, no wonder that it is the place in the game that holds the most number of unlockable characters.

In this guide, we will look into the steps of how to get the unlockable characters in the Federal District.

Who are the Characters that can be Unlocked in the Federal District?

The characters that can be unlocked in the Federal District are:

Talk to the Transport Official at the north section of the Federal District to start the Taxi Unfair side mission where you need to look for a stolen air taxi. You can talk to the witnesses around the district to narrow down the search area which will lead you to the Senate View area.

Talk to the Taxi Thief and agree to pay 14,500 to ride the deluxe taxi. A fight will then ensue and you will need to defeat all the thieves that arrive at the scene. After the fight, the Transport Official will arrive. Talk to him to complete the mission and unlock Luminara Unduli as a playable character.

Head to Palpatine’s Office and talk to Mas Amedda to start the Kouhun Kalamity side mission where you need to take care of a kouhun outbreak in the Federal District. You need to defeat 20 kouhuns all across the city.

They are usually in small groups and are attacking citizens. You can follow the markers to find out where the kouhuns are. Once all kouhuns are defeated, go back to Mas Amedda to complete the mission and unlock him as a playable character.

Go to the Jedi Temple Lobby and talk to Yaddle by the staircase to start the Tuskens and Dragons side mission. Then, head to the Jundland Wastes to search for clues about the canyon Krayt Dragon. Talk to the marked characters to narrow down the search area.

You will then find a group of Tusken Raiders that you can use mind tricks on to make the dragon come out. You will then have to fight the Krayt Dragon. It’s not a difficult fight and its attacks are easily telegraphed. Once it has been defeated, Yaddle will arrive at the scene. Talk to Yaddle to complete the mission and unlock him as a playable character.

You will then meet Aurra Sing who will then flee away from you. You need to chase her down while shooting at her to lower her HP. Once it’s down, she will mention that she jettisoned the holocrons up into space. You then have to fly up into Naboo Space and go to the yellow marked areas to collect all five holocrons. Report back to Jocasta Nu to hand over the holocrons and unlock her as a playable character.

You need to complete the Stolen Knowledge side mission from Jocasta Nu first to be able to talk to Aurra Sing. She can be found at the Core Square in the Federal District. Talk to her as a Bounty Hunter to start the Bounty Hunter Hunt side mission. She will tell you to look for Bossk in Niima Outpost in Jakku.

Fly to the Niima Outpost and talk to the marked NPCs to narrow down Bossk’s location. You will then find him inside a storehouse. Find the key nearby to open the storehouse and then talk to Bossk. Aurra Sing will then arrive which will complete the mission. She will then be unlocked as a playable character.

How to Unlock the Droids in the Federal District?

Most of the droids from the list above can be bought from the Shopping Centre at the west side of the Federal District. In order for all purchasable droids to appear in the shop, you must complete Episode III first.

Here are the cost of purchasing each droid:

As for the Imperial Probe Droid, you must talk to the droid salesman and then have a Villain access the terminal to disable the lasers. You can then purchase the droid for 5,000 studs.

Check out this video by Skyrux showing how to unlock all the playable characters in the Federal District: