A guide on how to find all witnesses for the Ma Klounkee Most Foul side mission in LEGO Star Wars The Skywalker Saga. 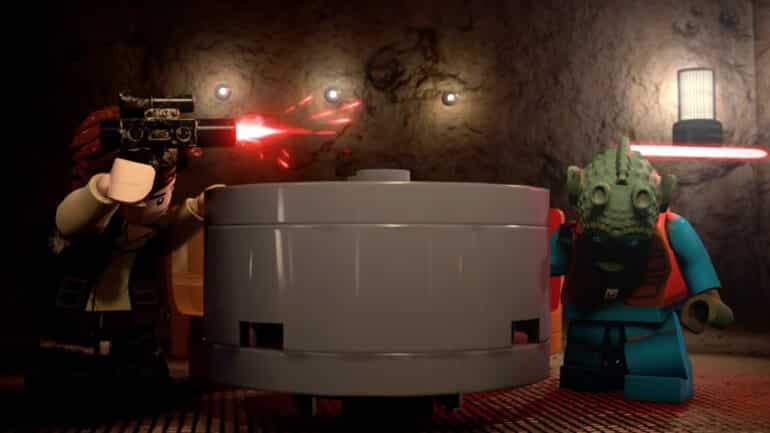 Ma Klounkee Most Foul Side Mission is one of the optional quests that can be done in LEGO Star Wars: The Skywalker Saga. In this side mission, Stormtroopers want to know what happened to Greedo the bounty hunter and who actually shot first. Clues will have to be gathered from the witnesses of the scene to piece together the story.

In this guide, we will look into how to complete the Ma Klounkee Most Foul side mission.

How to Start the Ma Klounkee Most Foul Side Mission?

To Start the Ma Klounkee Most Foul Side Mission in LEGO Star Wars: The Skywalker Saga, head to Mos Eisley in Tatooine to find a group of Stormtroopers standing in a corner. One of them will have Greedo’s face as an icon above their head. Speak to this Stormtrooper and he will ask you to find the witnesses around Chalmun’s Cantina who saw the shooting.

How to Complete the Ma Klounkee Most Foul Side Mission in LEGO Star Wars: The Skywalker Saga?

You will have to find 6 witnesses near the Chalmun’s Cantina to gather information about what happened to Greedo. All of these witnesses are easy to spot thanks to the “!” marker above their heads. You will only be able to speak to 5 of these witnesses right away since the last one is hidden behind a door and will not let anyone else except for his date.

Talk to the witnesses in the Cantina

Enter the Cantina and you will find two witnesses to talk to, one just by the door and one at the bar.

Talk to the witness right outside the Cantina

This witness talks in their own language, so use a Protocol Droid to translate what he is saying.

Talk to the witness on top of a house

You will need to use a Jedi or a Dark Side character to use the Force and stack up the Imperial crates beside the house to access its roof where the witness is.

Talk to the witness standing near the Trade Tower

Find the cloaked witness near the tower and talk to him. He will start fleeing and you will have to chase and attack him to make him stop. You’ll then be able to gather info from him about the incident.

There is a Twi’lek standing near a moisture vaporator that can be controlled using the Jedi Mind Trick. Use the mind trick on her and make her knock on the closed door. She will then be let in and you can use this opportunity to talk to the last witness.

After talking to all six witnesses, go back to Mos Eisley in Tatooine to the Stormtroopers and unlock Greedo as a playable character for your reward.

Check out this video by Release-Fire showing the locations of all the witnesses in the Ma Klounkee Most Foul side mission: