A different kind of Thor! 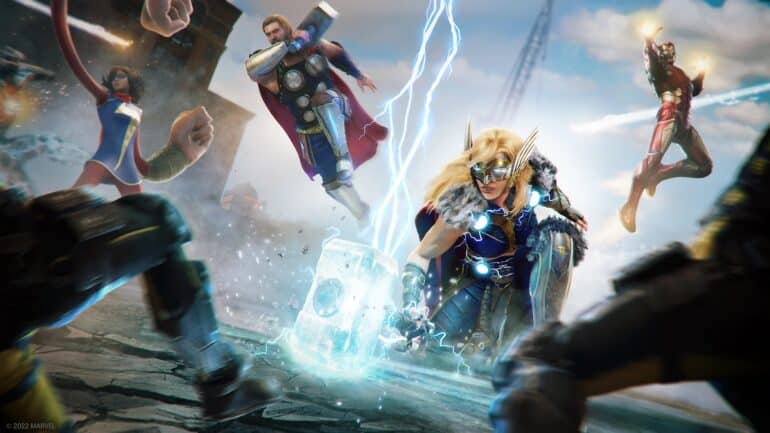 Crystal Dynamics has released the Marvel’s Avengers Mighty Thor gameplay trailer featuring all of her mechanics, cosmetics, and more.

The gameplay trailer shows a lot of new information about this particular Mighty Thor in the game. The early parts of the video reveal the origins of the character and the lore in the game. In this game, she was torn from an alternate timeline via a rift is space-time that was caused by Tachyon Anomalies. When she was still in her original timeline, she became the Mighty Thor after Thor Odinson gave up his mantle in his grief after the A-Day tragedy and Jane got cancer.

Zehra Fazal, known for her work on Apex Legends, Borderlands 3, and Destiny 2, is the voice of Jane Foster in this game.

The Power of a God of Thunder

In the game, Marvel’s Avengers Mighty Thor has all the strength and power of a God of Thunder. She has been watching Thor work in battles and that has helped her use Mjolnir easily. She does have her own style with grace compared to Odinson.

Mighty Thor has unique talents with Mjolnir like the All-Mother’s Blessing, which is her new intrinsic ability, and God Tempest, her new Overcharge, which is inspired by the elder god sealed within Mjolnir. With the All-Mother’s Blessing, it will build the overcharge meter with melee attacks. When this bar gets full, she can then unleash her powerful God Tempest. It increases the ranged hammer damage and can create shockwaves with each it.

Both abilities can be upgraded with Mastery skills that will improve damage, increase the strength of the shockwaves, and can even increase the generation and duration.

Marvel’s Avengers Mighty Thor has a ranged attack combo called Quick Fire. It allows her to make a second more powerful ranged attack by timing her throw as she catches Mjolnir when it returns to her hand.

The Ranged Power Attack is one of Marvel’s Avengers Mighty Thor’s abilities and has the Seek and Pin upgrade. It can empower Mjolnir to seek out and pin enemies without needing to aim. It will automatically find the enemies and attack them easily.

Jane’s melee strikes have a different style with adds a hammer toss to her light attack combo, which gives it an extra reach. Like Odinson, she also has moves like Headstrong but with her own spin of it. She has the Thunderkick, which will send enemies flying when hit.

Marvel’s Avengers Mighty Thor’s Ultimate Heroic is The All-Weapon. She will first send Mjolnir to seek and destroy enemies nearby and then she will call upon the All-Weapon Undrjarn to protect her. It reduces all damage taken while hitting her enemies along the way.

The All-Weapon has its own full set of specializations and allows customization to Mjolnir’s strikes. It can make them faster and channel a powerful shock status against nearby enemies. Jane can use the hammer as a defense shield too.

With Jane’s addition, she is now the third Marvel’s Avengers member to have flight.

Outfits to Choose From

Jane has a variety of Outfits to choose from based on the comics. She also has various Takedowns, Emotes, Nameplates, and even her own Hero Challenge Card and mission chain.