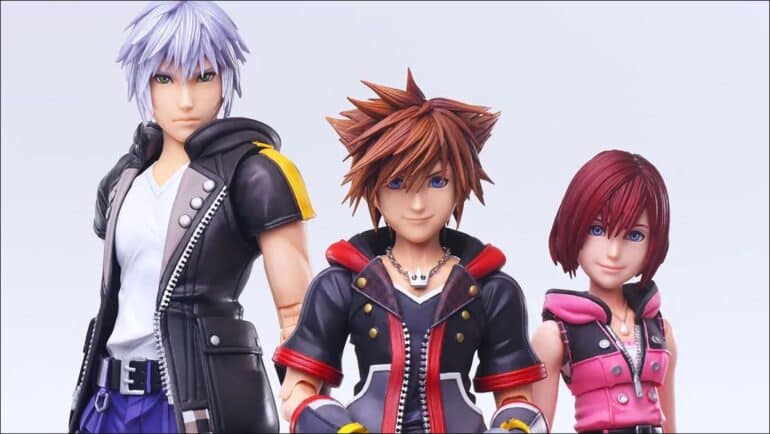 Kingdom Hearts 3 is one of the biggest JRPG games of Square Enix. For 20 years, the franchise has given us tons of surprises not only through games but also through hobbies, music, and many more. Recently, Square Enix has announced a new lineup of figurines for their Play Arts collection and to the shock of many fans such as myself, they announced 3 characters that will join. Coming out fresh from their 3rd installment, Sora, Riku and Kairi will become part of the lineup in Playarts ver Kai.

Sora, the main protagonist of KINGDOM HEARTS III, makes an appearance in the PLAY ARTS KAI line with a completely new “Ver.2“ sculpt!

In addition to the brushed-up modeling, he features the metallic crown motif necklace, which is eye-catching. The face parts are vividly colored and have detailed expressions. Includes alternate hand parts and Sora’s iconic “Kingdom Key” Keyblade. Additionally, the Deluxe version comes with two extra face parts, one with a smiling face and the other with a battle face, as well as the Shooting Star and Ultima Weapon Keyblades, making this a luxurious set. This is a must-have item for fans who want to reenact various scenes from the game.

Riku, the keyblade wielder and childhood friend of Sora and Kairi from the KINGDOM HEARTS series, makes his appearance in the PLAY ARTS KAI line based on his design from KINGDOM HEARTS III! The texture of his hair, the shading of his skin, the gold buttons, the wrinkles in the clothes, and other details have been carefully considered.

A fantastic representation of Riku, who has become more dependable and gentle through the adventures of the series, the figure is a sight to behold. Includes additional hand parts and Riku’s iconic Keyblade, “Braveheart,” making it possible to replicate iconic poses. Additionally, the Deluxe version comes with two face options, including a smiling face and a battle face, the Keyblade “Way to the Dawn,” and the broken “Way to the Dawn” that was so memorably depicted in the story, making this a luxurious set.

This is a must-have item for fans who want to reenact various scenes from the game.

Kairi, the Keyblade wielder and childhood friend of Sora and Riku from the KINGDOM HEARTS series, makes her appearance in the Play Arts Kai line based on her design from KINGDOM HEARTS III!

With a distinctive hair texture and gentle yet vivacious expression, this figure depicts Kairi after her growth Keyblade wielder training. You can see the beautiful attention to detail even in the vivid pink coloring of her pink top and skirt. Comes with two face options, including a smiling face and a battle face, additional hand parts, and Kairi’s highly decorative Keyblade “Destiny’s Embrace” to reenact various scenes from the story.

What is Play Arts Kai?