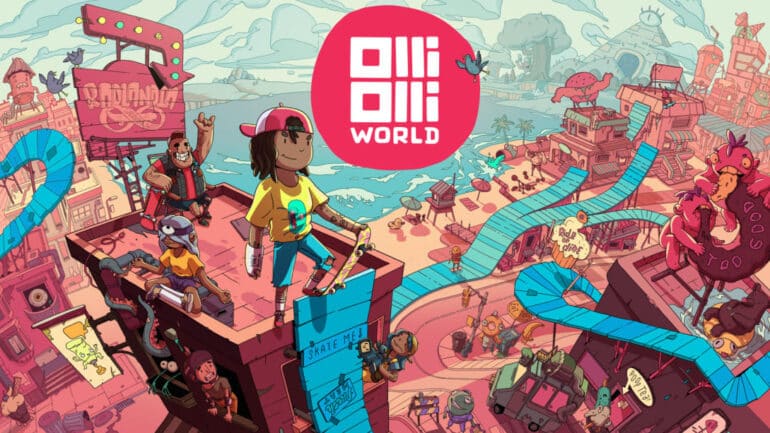 Welcome to the land of Radlandia. A world where everyone lives and breathes skateboarding. In OlliOlli World, the world is as much in focus as the players that skate within in. Interesting characters and stylized scenery inhabit every corner of the five districts of Radlandia, and beyond. And although the visuals are a drastic departure from previous games, the game remains true to its roots with mechanically smooth and enjoyable gameplay.

OlliOlli World is a skateboarding game wherein the player is a candidate to become the next Skate Wizard, representative of the Skate Godz to the peoples of Radlandia. The previous wizard, Chiffon, is nearing retirement, and is looking for an apprentice to take over the duties of Skate Wizard. Chiffon and her long time friends see something different about you, but it’s ultimately up to you to prove your worth in the eyes of the Godz.

How do you impress the Skate Godz? By being you, of course.

On paper, the controls for OlliOlli World are easy enough to understand. When pushing the left thumbstick in one of eight directions, the player can perform a trick. Holding it down and spinning it, performs an advanced trick. Pushing the stick in any direction along a rail or wall will start a grind or wallride respectively. And finally pushing the X button pushes the skateboard forward. That’s all the player needs to know to fully complete a level.

To add more to the player’s score, they can always perform manuals on the ground, holds using the right thumbstick in the air, and press X as they land on solid ground. Now these moves aren’t needed to finish the level, but they may be needed to complete certain challenges and to overcome previous high scores.

If at any time, the player wipes out at any point during a run, Chiffon is there to teleport you back to her checkpoint at the press of the triangle button. Players who wish to complete the no checkpoint challenge will have to hold triangle to restart the level. Either way, the process is seamless and almost instantaneous.

The in-depth character creator allows players to express themselves as they wish. The near limitless combinations are only held back by the kinds of items you have unlocked. By completing in-game quests and score targets, the player can unlock new outfits. Giving them the ability to show off their style to the world via multiplayer.

Gameplay wise the game’s greatest strength lies in design. There are high score limits with complex trick trackers and a combo system, which is cool and all but that’s not all that it is. By incorporating different routes in the 2.5D world, the player chooses which path to follow. They can decide to take the more laid back route or the gnarly route, a more challenging road but has the potential for even high scores.

There are side-quests and optional levels to unlock by talking to the right people or when certain requirements are met. These don’t add more to the story of the game, but as the names suggests, they are optional objectives that give more information about the world and possesses a cosmetic item for you to unlock.

The multiplayer aspect allows you to challenge friends and other players through high score challenges that don’t require being online at the same time and a lobby where players challenges each other in real time. This, in my opinion, adds hundreds of hours to the game even after the story’s been completed.

The game has a cell shaded look that appeals to many people. The characters too are expressive and lively despite only having a set number of animations to them. But they are charming enough to the point that you may just miss it, unless you’re looking real hard for anything that may fault the game, of which there are very few outside personal preferences.

The dynamic environments is what gives life to every level. It’s definitely a lot better than staring at the same static images for the hundredth time. What’s more, is that the new 2.5D perspective is what allowed the game to have split paths. Something I have nothing but praise for. On a final note about the visuals, each district is very much distinct to its visuals. The vast and calm deserts are very much different to the constant activity seen along the beach as the waves ebb and flow.

The game’s soundtrack is very chill and fits well with everything else in the game. It can be changed up at any time with the press of shoulder buttons. The characters talk in broken Sims, it seems. Nonetheless, it is their design and actions that make them worth remembering. The writing is… mostly safe for all ages though I’m pretty sure the jokes that adults would understand will fly over the heads of young ones.

OlliOlli World is a game that caters to both casual and competitive players. The controls are easy to learn, yet difficult to master. Every part of the design has the player’s wishes in mind. Because of this, I can choose to take it easy for the initial run and redo the levels again as many times as needed to complete individual challenges. Speaking of which, I really love the challenge the game offers, even if I feel like the lead of a bobsled team, and it’s my job to memorize the entire level from start to finish.

It is very hard to find faults in this game. Outside of occasional mispress of buttons to pull off unintended moves, there really isn’t something that makes the game hard, unless the player chooses to do so.

So what happens when the player completes the tour of all five districts? Why they unlock the path to Gnarvana with the blessing of the five Skate Godz. From there, the player is able to partake in new challenges. But I’d like to think the journey was its own reward. Getting to know yourself as a player, and whatnot.

OlliOlli World is visually beautiful and mechanically fulfilling. The game appeals to both casual and competitive players, all the while wrapped in a charming world inhabited by interesting characters. The greatest strength of this game is its ability to simultaneously cater to the needs of players who are looking for a stress free story adventure and players who are looking to get the most out of the game in terms of mechanical challenge. If you love quirky characters and skateboarding games, I can’t suggest this game enough for you.

OlliOlli World – Review
Score Definition
Almost perfect if not for the nitty-gritty. If it’s quite there but not enough to push the boundaries, it’s still an awesome game.
Pros
Easy to learn, difficult to master
Extremely charming world and characters
Near limitless customization options
Caters to both casual and competitive players
Cons
Sometimes you pull off unintended moves
Some trial and error is needed for some challenges
Cutscenes are just characters standing the same positions, doing the same animations
9
Excellent