The Problem With Femininity: None, or Too Much? 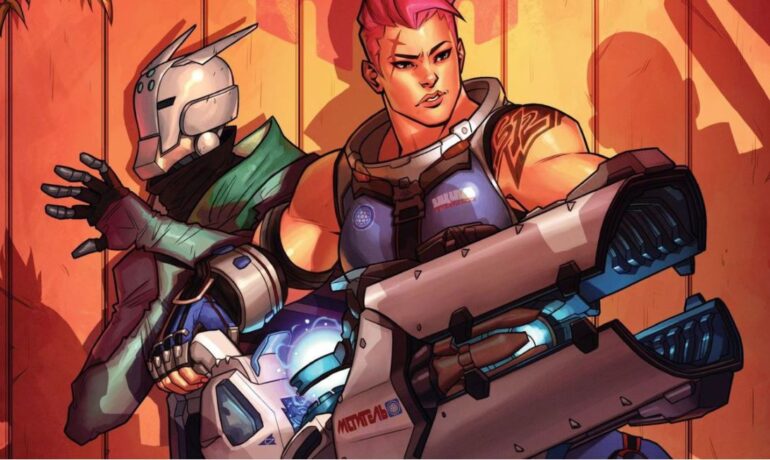 Zarya is one of my favorite Overwatch characters, and certainly not one that has escaped the collective gaming consciousness. Zarya is a female russian bodybuilder who enlisted into the army to protect her homeland and also something of an accidental LGBT icon despite cover girl Tracer being the game’s first openly LGBT character.

Zarya also happens to be the star of Overwatch’s latest comic installment, in which she searches for notorious hacker Sombra on the orders of her boss and local hero Katya Volskaya. She does this with her signature brusqueness, and is show in various in-universe locales such as Numbani in Africa and Li Jiang in China… All while wearing her standard combat outfit.

First, I’ve actually cosplayed Zarya, and I know that that outfit isn’t exactly subtle. I’m not a champion weightlifter, and Zarya’s suit is probably made from more comfortable materials than craft foam, but I wouldn’t have chosen a bulky combat uniform for what was essentially a solo intelligence mission. Zarya spends about half of the plot looking for Sombra like she’s Carmen Sandiego, sticking out like a sore thumb.  While you could argue that she’s wearing her base uniform as part of protocol, the same can’t be said of some other characters – Symmetra, for instance, is shown in her standard turquoise outfit (likely issued by her employer) in her own comic while on an infiltration mission, and in the Vishkar uniforms while on duty in the office. I don’t think that it would have hurt for Volskaya to have issued Zarya a more inconspicuous outfit, not dissimilar from those seen on various soldiers in Sombra’s “Infiltration” cinematic.

I don’t doubt that Zarya is incredibly dedicated to her cause and discipline, but even the other characters have some little nods to what they do in more casual settings. Pharah, one of the few other female characters in some form of active service, is seen during the Christmas comic having dinner with someone who is presumably her father – Zarya is shown in the same comic on TV, again, in combat gear… though at least it was her Christmas skin instead. Which is a white version of her basic gear… with sleeves. Oh, and her gun is pink.

It’s probably also worth noting that D.Va is the only other female character currently serving in her country’s military, but we see her in a santa outfit in the very same shot that we see Zarya in fatigues. It feels like Pharah and D.Va are allowed some room to shed their “masculine” armor and suits, and are allowed to otherwise express themselves – Zarya isn’t, and her unfeminine aspects are glued onto her.

Zarya is hardly the only woman in video games confined to military-styled combat uniforms, but she’s also likely one of the least feminine, joining the likes of Morales and Sgt. Hammer (and by extension, Zagara and Izsha) in the “unfeminine women of Blizzard” club. Looking through other games, Meryl and Quiet and the various Metal Gear women come to mind, as well as Jill Valentine from the Resident evil series, Nova, and Kerrigan (pre-zerg) from Starcraft. Other characters have more creative interpretations of what could count as a military outfit, such as Street Fighter’s Cammy and her iconic high cut leotard, Nina Williams’ various purple bodysuits, and the various ships from Kantai Collection in different styles of military dress – not to mention actual ship parts and guns. Shift a couple of genres and more armored women show up, such as Tyrande Whisperwind from Warcraft and various women from League of Legends including Leona, Diana, Lux and Camille.

Most of the characters I’ve mentioned often have the opposite problem – people tend to complain about how sexualized they are. Quiet is a particularly egregious example as her outfit shows a lot of skin (and is impractical for such things as blocking bullets, but I digress.). That’s not to say that they have to look boring while as characters, nor that they can’t express any femininity while doing their job. Tekken alone has a range of female characters, all strong fighters, dressed in different outfits that communicate their character to players – Asuka wears a short bodysuit for ease of movement that happens to show off her legs, while newcomer Lucky Chloe wears a pink cat-motif idol outfit. Nier Automata’s 2B is a great example of ass-whooping made to look good, as creator Yoko Taro famously tweeted that he’d like all of the racy fanart of her collected into a zip file for easy distribution.

All that said, it still does feel like tough women in video games fit somewhere on two extreme ends of a femininity scale: women that are women – mothers, daughters, sisters – first and fighters second, and women that are fighters first and women second. (I briefly touched on this in my previous piece on women in video games.) A great example of this in action is in Dragon’s Crown, a game which drew a lot of controversy over how the women characters were designed – despite the male characters also being subject to the same general amounts of skin exposure and fanservice. The Sorceress in particular is said to be particularly “awful” with regards to respecting female bodies with her low cut dress, but that’s if you think that sexual expression is a bad thing. Games have no shortage of liberated women that express themselves sexually, like the Witcher’s Yennefer, the titular Bayonetta, and Street Fighter’s Poison – these characters are women first, and fighters second.

The Amazon is the other character who receives a lot of complaints, being skimpily dressed, but when you look at her properly she is muscular as all hell and would probably scare you if someone looking like that showed up knocking on your door. We tend to associate muscle with masculinity, and the contrast between her very feminine hair and face and her Jojo-Pillar-Man like body is quite jarring. She’s just as built as the male barbarian character and is showing off a lot (though a bit more, due to the thong) of skin, but her general character archetype is that of a warrior that shows off martial prowess, not too different from other warrior characters like those from For Honor. These characters are fighters first, women second.

Characters on this end of the femininity spectrum tend to have the feminine bits added on almost as a mandatory requirement, Metroid’s Samus Aran being an attractive and optimistic example, but others include the Zerg characters like Zagara that I mentioned above, as well as other monsters like Rek’sai from League of Legends. Perhaps this category ought to be renamed to fighters-and-unholy-abominations first, women second. (Not that male examples don’t exist – one of my favorite male characters in this area of gender expression is Kel’thuzad.)

I suppose there’s some merit to having unfeminine (or masculine?) women in games. Unfeminine women exist in real life, as well as people that don’t identify as masculine or feminine at all. Women are free to be beautiful, ugly, feminine and unfeminine, gender-particular or gender-neutral. There are great characters in a lot of those brackets, such as the fearsome female Grineer characters from Warframe. The problem is that game writers tend to resort to easily-missed tricks to either nod to a character’s feminine aspect, or accidentally go the whole way and just stick big boobs onto the character. With Zarya, the nod was with her pink hair, nails, and gun..

With other characters, well, let’s just say that this problem does have its extremes – the upcoming Middle-earth : Shadow of War features the iconic spider horror Shelob, known for eating people and outliving even some of the Tolkienverse’s biggest bads, as an attractive woman. (Jim Sterling goes on an amazingly entertaining rant about it here.) Shelob’s hardly the only beast character to receive the sexifying treatment, but at least League of Legends’ Elise makes it clear that her human form has a practical purpose, but it does feel like there aren’t supposed to be in-betweens – you’re either a monstrously unfeminine character with incidental lady parts, or you’re hot.

But back to Zarya. The Halloween event is coming up and as always, I’m hoping she gets a skin. Let’s hope that Blizzard doesn’t just flat out turn her into an unfeminine monster…