A guide on where to find the delivery spots to complete Ragman's Hot Delivery Quest. 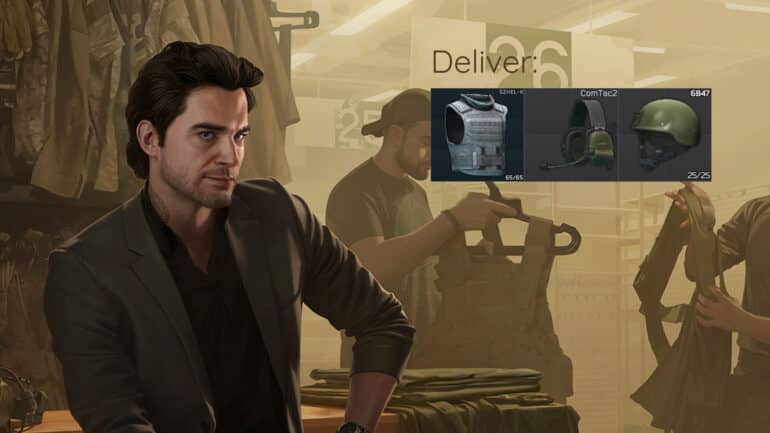 Ragman’s Hot Delivery quest in Escape from Tarkov is a difficult one. This guide will help you from how to unlock the quest, fulfilling quest objectives and what rewards you will be getting.

In Escape from Tarkov, players are kept busy with a number of quests such as Eliminations and Completions which oftentimes put players in combat scenarios. There are also quests that players can accept which only requires them to deliver items to certain individuals or at specific drop-off points.

One of the NPCs that you’ll encounter in Escape from Tarkov is Abramyan Sarkisivicch Arshavir, or more commonly known to his clients and subordinates as Ragman. He once held a high position in the ULTRA shopping mall and is now in the business of dealing clothing and gear to his clients.

Aside from selling his goods, Ragman also offers some quests which will reward players with EXP, roubles, and gear, and one such quest called “Hot Delivery” has Ragman asking players to deliver some goods in covert drop-off points as his clients who ordered them are too afraid to go near the hostile location.

How to unlock the Hot Delivery quest in EFT?

How to start the Hot Delivery quest?

Upon accepting the quest from Ragman, to start the Hot Delivery quest, players must first get the items listed in the objectives. These items can be purchased from the flea market and can also be worn while completing the quest, but these items will be taken out from the inventory upon dropping them off, so consider bringing additional gear.

Afterwards, go to the Interchange map. The items can be delivered in any order and can also be delivered in separate raid sessions, but it is recommended to deliver the items in as few trips as possible.

In this guide, we will start by locating the drop-off point for the Gzhel-K armor since it is located outside the mall.

The BNTI Gzhel-K armor’s drop off point is towards the west side of the ULTRA mall where the main entrance is located. Locate the empty outdoor stage (red tarp roof) which is in front of the mall’s blue façade that has the ULTRA signage on top.

On the ground near the front or side the stage are a couple of boxes. This is the drop-off point for the Gzhel-K armor. Press F to interact with the boxes and wait for 30 seconds to complete the drop. Do this twice for each of the armor.

Watch out for scavs and especially snipers that may spot you from the upper levels of the mall; try to hid behind the stack of boxes while completing the drop-off to avoid getting spotted.

Where to deliver the Peltor ComTac 2?

The ComTac 2’s drop-off point is the Avokado store inside the ULTRA mall. Starting from the west entrance of the ULTRA mall, head inside the mall and go east until reaching the Brutal store. From there, turn right and head straight through the hall. Upon reaching the junction at the end of the hall, the Avokado can be seen on the far end, opposite the Generic store on your left.

Go inside the Avokado store and head towards the far end of the store. You’ll then see a pile of trash where you can drop off the ComTac 2. Press F to interact with the pile and wait for 30 seconds to complete the drop. Do this twice for the second ComTac 2.

Where to deliver the 6B47 Ratnik-BSh Helmet?

The 6B47 helmet’s drop-off point is also at the pile of trash inside the Avokado store. Simply follow the same steps on how to deliver the ComTac 2 and make sure to complete the drop off twice for each helmet.

When dropping off the items inside Avokado, watch out for scavengers roaming in the halls as the store is pretty much empty, thus leaving you without any cover. Try to face towards the entrance or the sides while having the wall behind your back to spot enemies in advance.

If you want to learn more about the Interchange map and how to navigate through it for your advantage, check out our Interchange Map Guide.

Get Escape from Tarkov here.

Also check out this video by Buttorsomething on the Escape from Tarkov – Hot delivery Ragman Quest guide: