A look into the ins and outs of the Interchange map in Escape from Tarkov. 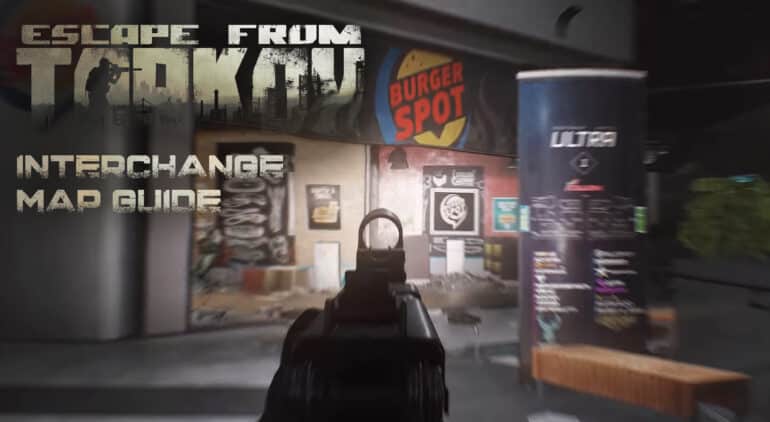 The Interchange map is one of the playable maps in Escape from Tarkov and it’s one sizable map that can overwhelm the uninitiated. Worry not because we have created a guide that can help you survive and make the most out of your trip.

The map is is centered around a huge shopping mall called the ULTRA Mall, and around it are several other key locations such as the Railway, the Power Plant, the Scav Camp, and the EMERCON extraction points.

The mall itself has two floors and a basement, and the inside of the mall is subdivided into four major sections:

The Main Shopping Center is the central part of the ULTRA mall in Escape from Tarkov where most of the smaller stores are located. Several hallways allow access to the upper, lower, and basement parts of the mall, as well as to the other anchor stores adjacent to it.

Similar to a shopping mall in real life, most of the stores are either selling themed or specialty items, so players can expect to pick up loot in relevant places such as meds within the pharmacy, clothing items in sports stores and fashion stores, computer parts in tech stores, etc. The second floor hosts mostly restaurants or fast food chains, so expect to find food loot.

When exploring the central section, players should be wary of getting ambushed from the upper floor, and even from the roof. It’s also a good thing to note that most of the central stores, despite having multiple openings, are usually separate rooms and do not connect to other adjacent stores. Do consider this to avoid trapping yourself when being hunted down by other teams.

One store of interest is Kiba (weapons shop) which requires two keys, one of which can only be received from the Mechanic quest 11, and the other one is in the parking area B under the ULTRA Mall. Players must first turn on the power to the mall by turning on the power switch located at the Power Station northeast of the mall itself.

Only then will the players be able to open the Kiba doors. Once opened, an alarm will be triggered that can only be disabled by a panel in the security office near OLI, or at another panel on the second floor. Plenty of weapon parts can be looted inside this store, which can be worth going through the effort.

A parody on the real-life furniture store, IDEA is situated on the northern side of the ULTRA Mall. Inside is a spacious hall littered with run-down cubicles of furniture displays and product shelves.

Because of how spacious this section is, it is best to stick near walls or high shelves to avoid getting flanked or getting easily spotted as compared to being out in the open areas. Not much elevated spaces are present, so most of the gunfight will be on the ground level.

In this section, keep an eye out for valuables such as cat figurines, horse figurines, and even bronze lions that usually spawn on shelves, desks, or drawers.

There are also plenty of bags and loot boxes, as well as crates scattered across the store. There is also a line of cash registers that can be looted for easy roubles, but they need a key to open. The key can be picked up inside a bus just outside (north) of IDEA.

Other points of interest inside IDEA are the front office (graphics cards, flash drives), and the pharmacy (meds).

OLI is the hardware store where lots of useable hardware can be picked up. This section is also wide and spacious and have plenty of high shelves that can serve as cover.

Because of the high shelves lined up in rows, players can zip around and in between them to stay undetected.

There are plenty of car batteries, sparkplugs, and gas analyzers that can easily be picked up from the shelves or on carts. Before heading on to the cash registers, you’ll need to go to the west side of OLI to find the front offices. The key to open the cash registers can be found on a desk in one of the cubicles inside the office.

Goshan is another section of the ULTRA Mall that is structured like a warehouse. The grocery proper is also spacious and have rows of high shelving, while the warehouse side is full of shipping containers.

The main loot in Goshan is mostly food supplies in the grocery, while at the warehouse side, there are plenty of weapon cases to check on top of the shipping containers, as well as inside them.

While there are plenty of cash registers to loot in Goshan, they need a key that’s different from the one used in IDEA. The best place to find a key is by going to the Customs map an checking inside the bus next to the new gas station.

Getting caught in gunfire in the grocery area can be difficult since there are large open spaces that don’t have much cover, so it’s also better to stick near the walls. As for the warehouse, the stacks of containers can become sort of a maze, which can be a good thing if you’re trying to shake off an enemy, or it can be a trap. Keep your bearings while traversing inside the Goshan warehouse, or in any part of the mall at all times.

Another thing to be aware of in Escape from Tarkov is the presence of the scav boss Killa, who can basically spawn almost anywhere inside the mall.

How to defeat Killa – Scav Boss on the Interchange Map

Killa is a tough boss to fight against without the proper ammunition, so it is recommended to avoid getting spotted by Killa whenever possible, unless he’s your target to farm his loot.

Attacking him with high-penetration ammo like 5.45 BS, 5.56 M995, or 7.62×51 is the best option. Shredding his 6B13 M’s durability to a minimum or focusing your fire on his legs are both viable options if you don’t have access to the proper ammunition to take him out.

In the Interchange Map for Escape from Tarkov, your spawn determines your extraction points, which are always on the other side of the map. If you need to get out of the middle of the map quickly, you can use the many paths that lead to the large superstructure in the map’s center to exchange spawns.

Six extraction points are available on the Interchange map for players to use in order to leave the area with all of the powerful loot they’ve collected while playing.

The EMERCOM Checkpoint extraction point is situated at the south eastern part of the map. Players have to be careful when choosing this point as it’s close to two spawn points.

The Railway Exfil extraction point is fairly a bit farther from the center of the map, but is relatively safer from spawn encounters.

One of the nearest extraction points is the Power Station, but you have to pay up 5,000 Roubles to exit from this point. Also, this point can only be used once per raid and can only accommodate 4 players max. (PMC only)

The Power Station is also a key area in Interchange as it is where one of the mall’s power switches can be found.

The nearest extraction point from the mall is a Hole on a fence, but there’s a catch: you can only fit through this exit if you leave your backpack behind. That means, you can only bring back whatever loot you have on your main inventory.

Only use this when things are getting dicey and you’re okay with saving some loot than saving nothing at all. (PMC only)

The Scav camp extraction point is located across the main west entrance of the ULTRA Mall. Players can only exit through this point if a Scav and a PMC is present at the same time. Quite a challenging point to exit from especially if you plan to find a random player from the opposing side to work with.

The Saferoom extraction point requires a couple of steps before it can be used. First, you need to secure a #11SR keycard, which can be obtained as a loot from Killa, from other maps, or from crafting.

Next, the power to the mall must be turned on (Power Station). Then, players must navigate to the Burger Spot store which is at the 2nd floor of the mall and find a urinal inside the store. Flushing the urinal will reveal a keypad where you can swipe the keycard.

The Saferoom can be found at Parking Area C at the basement. Only PMC can use this extraction points as Scavs who attempt to use it will just manage to get themselves trapped. Closing the door as a PMC will immediately request an extraction. Also, this point can only be used once in a raid.

It’s highly recommended to explore the map in offline mode or with friends first to familiarize yourself with the layout of the interior, as well as the exterior of the mall. There are several passageways within the mall that can either save you travel time, become your escape route, or become ambush points for unsuspecting players. Plan your route/s and prepare for contingencies.

If you plan to raid Interchange just mainly for the loot and roubles and you want to play as passively as possible, don’t forget to bring the necessary keys with you. We feel that it’s important to reiterate that some keys can be found easier in other maps. Aside from the mall’s passageways, the parking lot basement offers another route if things get too busy in the mall.

If you are the kind of player who prefers gunfights and letting other players do the looting for you, remember where the spawn points and exfil points are. This may be frowned by many, but in a game where you can lose your gear anytime, camping near these points can also be a strategy. With that said, you should also be wary of campers.

Do not take for granted the environmental sounds and noise that you and other players make. Different materials make different kinds of sounds when walked on. Check to see if you’ll be stepping on wood or metal floors. Make sure to keep you ears on high alert so that you can hear if someone is silly enough to run up the noisy escalators.

Most of the inside of the mall is dark until someone turns the power back on. Needless to say, stay away from lit areas as much as possible, or if you are on the offensive, use the darkness to creep up to your next victim.

Now that you have been fairly acquainted with the Interchange map, are you ready to use your knowledge to speedrun Ragman’s Hot Delivery quest? Check out our guide for it if you need a little bit of help.

If you are new to the game and you want to join in on the action, now is the best time to get Escape from Tarkov as all game editions are on a 25% discount as part of their Winter Holiday Sale.

Check out this quick video by NoiceGuy Tarkov on his Escape from Tarkov Interchange Map guide: