Salt and Sacrifice Co-op and Multiplayer

Salt and Sacrifice allows you to play with friends or strangers to tackle the game's challenges. Here's a guide teaching you how. 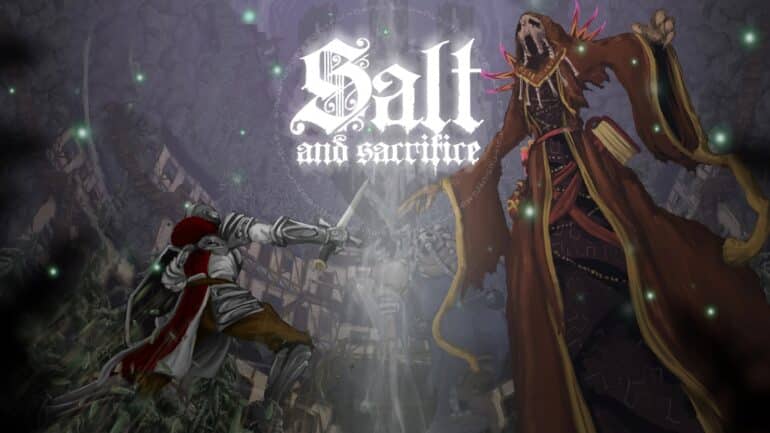 How to Play Salt and Sacrifice Local Co-op with Friends?

Here are instructions on how to start Salt and Sacrifice co-op local:

You can co-op with a friend locally by connecting a second controller and pressing a button on the Salt and Sacrifice main menu. This will cause a second menu screen to appear on the right side of the screen and the second player can then create or load in a character.

How to Host Salt and Sacrifice Online Co-op?

Here are instructions on how to start Salt and Sacrifice online co-op:

You first have to finish the Salt and Sacrifice tutorial to access its online cooperative features. After you’ve gotten to Pardoner’s Vale, you should head to the bottom where you can find Runereader Diedala. Above her is the cooperation board you need to interact with to access the online co-op features of Salt and Sacrifice.

How to Join Salt and Sacrifice Online Co-op?

Here are instructions on how to join someone’s game in Salt and Sacrifice online co-op:

Joining someone’s Salt and Sacrifice game session for cooperative play also requires finishing the tutorial segment. After you’ve arrived in Pardoner’s Vale, you should go to the bottom of the level where you can find the Runereader Diedala NPC. Just take the stairs above and you’ll see the cooperation board where you can input the rune password your friend gave you to join their session.

How to Start Salt and Sacrifice Three Player Online Co-op?

Here are the steps to play Salt and Sacrifice with three players in your online co-op play:

Now you have a third player in your Salt and Sacrifice co-op session. While the third player’s experience may be somewhat limited, you three can now explore the game and fight bosses as a team of trios.

How to Join Salt and Sacrifice Online Co-op (Random) with Strangers?

Here are instructions on getting the Pale Candle in Salt and Sacrifice:

After speaking with Beatrice once she’s gone to the Pardoner’s Vale, she’ll hand you the Pale Candle which you can use to enter a random player’s online cooperative session. You can find Beatrice in the building just below the cat in Pardoner’s Vale.

How to Host Salt and Sacrifice Online Co-op (Random)?

You need to remove your Spellmark using a Guiltless Shard to allow random players to join your online co-op session. After removing the Spellmark, use the Golden Candle found in Root-Ceil Cavern. The Guiltless Shard is an item frequently dropped from foes summoned by Mages so they should be easy to find. However the Golden Candle is a specific item that can take some navigation to find.

Here are instructions on how to find the Golden Candle in Salt and Sacrifice:

This chest will contain the Golden Candle that will allow random players to connect to your game. You’ll know you’re at the exit point in Root-Ceil Cavern when you see a pouch on the floor of an elevated level next to some stone stairs. You can then use the wooden scaffolding to jump to that location.

As soon as one player summons a Dawnlight Cooperator with a Golden Candle and the game is open for additional players to join, the other players will be able to join in as well. A defensive PvP player can join to protect the host and hunt down the invaders, and any of the PvP sides can join.

Your open game will allow invading factions to join in accordance with the rules of their own game. You’re not tied to a single faction, thus the invader can choose whatever faction to represent throughout the invasion.

The Order of the Dawnlight

The simplest faction is here. They show up as a random co-op partner in the middle of a game. As long as both parties have access to the same set of ability items, they can play together. You and your friends can have a good time playing together.

This is a player versus player (PvP) group. It’s all about killing you if they get into your game. They’re not the only ones waging a war on the host, but they’re the only ones out to get you.

It is a PvP/PvE hybrid faction known as the Blueheart Runners. Your world will be invaded by a group of Haze Burnt that act as game fodder if you allow them in. The Blueheart will summon Haze Wraiths to chase down the host as it gathers ashes, making things much more difficult.

The Chaos Hunger faction’s goal is to create havoc everywhere they go. Dawnlight Order, Shroud Alliance, or Blueheart Runner can only join a game that already has one of these factions in it. Even though they’re a PvP group, it’s up to each player to decide who they support and who they hurt in battle. The host can either anticipate the Chaos Hunger’s motivations or just try to expel the invader through violence by leaving tricks or sweets in bone-wrapped gifts for the host.

A group of oath-bound observers

When a host has been attacked, this PvP faction is there to help. Both Shroud Alliance and Chaos Hunger can send out a call for help to the Oathbound Watchers, who can then join your game to help you fight off any invading forces.

Inquisitors of the Sheriff

But even if you’re a lone wolf in Salt and Sacrifice, you won’t have to worry about being intruded, but if you want to play with others, the game takes on a whole new dimension.

That’s our guide for the Salt and Sacrifice co-op. We hope this helped you be able to join your friends in either local or online cooperative play. If you really liked this guide, you may be interested in our Salt and Sacrifice classes guide in order to diversify your party to take on boss fights.

There’s tutorial videos for accessing the Salt and Sacrifice co-op and multiplayer play that you might want to check out. This Youtube video from PepperHomie might help paint a better picture.