The very first boss fight in Salt and Sacrifice can be very challenging. We've created this guide to help you out. 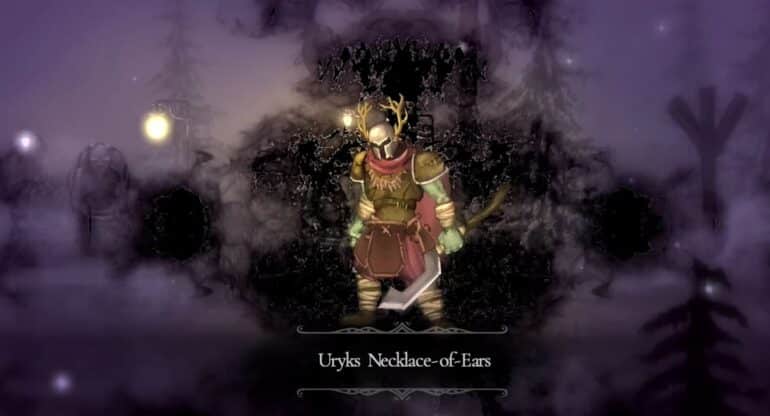 Salt and Sacrifice pits players with an early hurdle in the form of a boss fight with Uryks Necklace-of-Ears. This giant boss swings hard and more than a few players have gotten stuck with finding ways to beat Uryks. While Uryks isn’t the most challenging boss, beginners can often find themselves underequipped to fight him. We’ve created this guide to teach you how to beat the Uryks Necklace-of-Ears boss fight in relative ease. We’ll teach you how to avoid Uryks hard hitting swings.

Here are the steps to beat Uryks Necklace-of-Ears boss fight:

The best strategy to beat Uryks Necklace-of-Ears is to keep your distance with ranged attacks and slowly pestering him with melee attacks as soon as he leaves an opening. Uryks hits hard, but his attacks are easily telegraphed. Dodge behind him and attack his backside. Don’t get too caught up when you’re attacking him after an opening, else he might quickly wind up another attack with you unavailable to dodge.

Uryks Necklace-of-Ears is weak to poison attacks. Bring a Poison Bomb with you which makes the fight significantly easier. Additionally, Uryks has no ranged attacks making it easy to attack him at a safe distance.

Once you’ve depleted Uryks’ health in half, he starts to become more aggressive. This is when you’ll need to keep yourself in check. He now has a three-hit combo that can quickly end you if you fail to dodge it. When Uryks does a jump attack, he will quickly turn around and slash again so don’t fall for that fake opening. Don’t get too used to Uryks’ patterns during the first half of his fight.

Don’t get greedy when fighting Uryks at half health. Your melee attacks can quickly be countered this time around. It’s during the second phase when you’re going to want to stick to ranged weaponry as you’ll only get a few moments of opening for melee attacks. Slowly weather him down with ranged attacks.

The best way to prepare for the boss fight with Uryks Necklace-of-Ears is to get a good ranged weapon. Check our Salt and Sacrifice classes to see which class has the best starting ranged weapon.

Buy Poison Bombs from Shopkeeper Arnald for 100 Silver Pieces because Uryks Necklace-of-Ears is weak to them. You have to free Arnald from the Ashbourne Village first before he appears in the Pardoner’s Vale where he properly sets up shop.

There is a Obelisk you can rest up on first before continuing down Greymoss Mire and encountering Uryks Necklace-of-Ears in the middle of the road where his boss fight starts.

We hope this guide thought you how to beat Uryks Necklace-of-Ears. He isn’t the hardest boss in the game but beginners can understandably be challenged by him. So long as you come equipped and are prepared, you can take this early level boss down with ease.

If this guide really helped you out, please consider checking out our other content. There’s this Youtube video from 100% Guides that showcases the fight with Uryks. We suggest you watch it so you can get an idea of what you’re getting into and how to beat the Uryks Necklace-of-Ears boss fight.