Take the wheel and command your own ship! 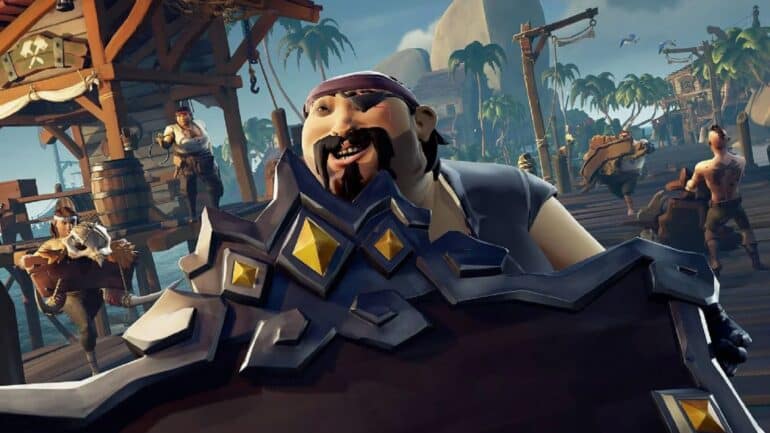 Sea of Thieves Season 7 introduces a brand new element of simulation with the long-awaited feature known as Captaincy. This gives players a deeper sense of ownership over their Ship as well as new methods to progress and be rewarded for their efforts.

It’s a fancy new update, and there are many compelling grounds to take up the role of Captain or to join a friend’s crew. So, here’s an overview of what the Captaincy update in Sea of Thieves Season 7 entails and what you can accomplish with it.

What is Captaincy in Sea of Thieves?

Captaincy is a feature in Sea of Thieves that allows players to spend Gold to purchase and own their own ships. This enables additional methods of development, more ship customization options, and extra perks available only to Captains or players aboard a Captained Ship.

How to become a Captain in Sea of Thieves?

There is a new option called My Ships on the main menu before players set sail, where they can buy ships and see the ships they already possess. Even if you don’t own a ship, you can still go sailing as usual. Owning and operating your own Ship is completely up to you.

As soon as you purchase a ship, you’ll be transferred to a new hub where you can give it a name. Remember that once you’ve registered a name for your ship, you’ll need to acquire a Ship Renaming Deed from the Pirate Emporium in order to change it.

When you first set sail on a Captained Ship, the Pirate Lord will anoint it and go over the perks of being a Captain in an in-game tutorial, so you don’t have to worry about a thing.

Benefits of Owning a Captained Ship

When you set sail on a ship that has been Purchased or Captained, it gives some exclusive benefits for all crewmembers, regardless of whether the ship belongs to you or to another player. These perks are as follows:

Crests with the ship’s name inscribed on them will be displayed over the captain’s quarters. Furthermore, other crews can see your ship’s name when they gaze at your vessel through a spyglass which is pretty cool.

All players will be pleased to see the Sovereigns who operate the Trading Posts, though they will only interact with Captains.

In exchange for gold and reputation, players can hand in any loot they have found. They’ll take care of the grunt labor, and you’ll reap the same benefits. On top of their trading post, you’ll find a harpoon, speeding up the process of unloading chests.

If you try to sell an item like Mermaid Gems that might go to any company, the trade will be made to a random company unless someone on your crew is an Emissary, in which case the item will be sold to that specific company. Keep in mind that the Reaper’s Hideout cannot collect any loot on behalf of the Reaper’s Bones, and that you will have to deliver any such items personally.

Every ship with a captain has a Captain’s Log on the voyage table, where they record the progress made by the crew. The Captain can personalize it to highlight the ship’s many accomplishments during its journey.

Additionally, if you manage to sink a Captain’s ship and salvage its logbook, you can sell it to the Reaper’s Bones for some gold and reputation. The longer a crew has lasted without sinking, the more valuable they become.

In Captains Voyages, players have the option of making individualized excursions. All trading companies are included, and activities in-game can be purchased separately. You can set up a simple one-map mission, or you can stretch it into a multimap objective for a larger reward in Captains Voyage.

For a fee, captains can lock in their preferred ship cosmetics, ensuring that they are always available during sessions. You can change these at any point throughout the session, but they will always return to whatever loadout you have saved the next time you go sailing.

The Shipwright now offers captains a variety of new options. Wood, Cannonballs, Throwables, Fruit, Meat, and Bait are just some of the restockable supplies that can be purchased by Captains and delivered straight to their barrels, along with repairs for damage and cosmetic scars. Additionally, Captains have the ability to purchase other cosmetics for their ships, as well as Captain’s Voyages.

The ship’s captains now have a wide variety of new options to choose from in order to personalize the vessel to their preferences. By default, only the Captain is granted access to make changes to these choices; but, within the game settings, the Captain has the ability to extend this permission to the rest of the crew.

The captain’s quarters are now fully customizable in-game, joining the ship’s exterior as a canvas for player creativity. Changing your ship’s interior requires a trip to the Shipwright Shop, which is located on the docks right next to your ship when you spawn. Once you’ve done that, go ahead and select Ship Decorations from the Ship Customization Chest.

Everything from the table to the carpets can be personalized. New Trinkets, such as trophies of past voyages or just amusing tiny decorations, can be displayed on shelves. Pictures can be hung on the wall, but be aware that the ship’s motion and any explosions could potentially cause them to be skewed.

Some of these cosmetics are also unlocked only after reaching certain levels in the new Milestone system. Different Ship Milestones unlock exclusive titles and banner designs for when your ship is out in the open, achievements for your Captain’s Log, and even Flag designs that set your ship apart from the rest.

Given the aforementioned perks and progression details available to Captains, those interested in Captained Ships may be curious about the following details:

Own Each Type of Ship

You are limited to purchasing exactly 1 of each available ship size. However, the new Ship Milestones system requires you to advance a ship to Legendary status before you can buy a second ship of the same size.

Dismantle your Own Ship

If a player no longer wants a ship they own, they may simply select “Dismantle” from the menu and the ship will be destroyed. Any progress the ship has made up to this point will be lost permanently.

That ship you purchased and gave a fancy name to is not necessarily unique or irreplaceable. If your ship sinks, don’t worry—it will spawn brand new and you can carry on as usual.

If the ship’s Captain loses connection, they have a brief window of time during which they can reconnect without penalty. After that time, or if the Captain voluntarily quits, the ship will become a non-Captained Ship, and all changes made during that session will be lost.

Additionally, any hull damage, such as a patched hole, scuffs, or burns, that a ship sustains during gameplay will remain between sessions. The Shipwright can fix this at a reasonable price; this includes patching up active holes in the hull; however, there is a cooldown period between repairs. While items stored in barrels are lost between sessions, ticks put on the Map Table are saved.

That’s pretty much everything you need to know about Captaincy in Sea of Thieves . If you like this guide, you can check out our other Sea of Thieves Articles Here.

Also check out this video by PhuzzyBond explaining What is Captaincy in Sea of Thieves: