Sea of Thieves How to Buy Ships, Ship Prices and List

Buy your own ship in Sea of Thieves. Learn how to purchase a ship and a list of all ship prices. 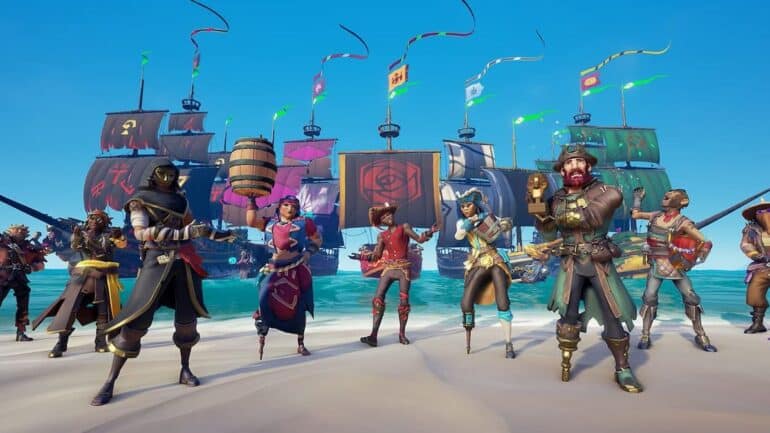 Pirates need to learn how to buy ships in Sea of Thieves to craft their own legend in the seas. The Sea of Thieves Captaincy update has given players a more personal connection with their very own ships. The ability to buy your own ship and customize it to your liking is now possible and this guide will teach you how to do so.

How to Buy Ships in Sea of Thieves?

To buy ships in Sea of Thieves you need to go to My Ships from the Adventure option of the Main Menu. From there, you’ll be presented with the option to Purchase Ship where you’ll be able to buy your very own sea vessel.

As of now, there is no way to buy a ship when actually in the game. You’ll need to go back to the Sea of Thieves main menu and exit your current lobby. There’s no NPC in any of the islands you can talk to that will give you a list of ships to buy. This is because your ship actually spawns with you as you enter the lobby.

Only the host’s personal ship will spawn. If players are joining your lobby, you will be able to bring your personal vessel with you. However if you’re not the host, you will have to contend with one of your friends being the one to bring their personal ships into the game.

Every time you want to bring your ship into the game, you now need to select My Ships from the Adventure option. Don’t worry you don’t need to buy a ship if you can’t afford it. The generic ship types are still available for you to use if you don’t own one or not have the ship type you seek for your party.

You also do not need to worry about playing Sea of Thieves long to buy a ship. You only need to be able to afford the ship’s price to get your own. No need to become a Pirate Legend or reach a certain level in the game.

Buying a ship isn’t going to be cheap. You’re going to need a lot of gold to buy your own personal ship. Here is how much each ship type costs:

You can name any ship that you buy before the final transaction is made. After Sea of Thieves has approved of the name you’ve input in the textbox, you can make the purchase for any of these ships.

The Sloop is the smallest ship type in Sea of Thieves. It’s really made for one to two players. What it lacks in size and strength, it makes up for pure speed. This is the fastest vessel in the game bar none and hard to catch up to.

The Brigante is a medium sized ship fit for two to three players. It’s not as fast as the Sloop but it’s not as slow as the Galleon. It fits all the needs of any crew and a jack-of-all-trades in terms of performance.

The Galleon is a large ship meant for a full party of four. It is the most bulky and has the highest defensive and offensive capabilities. The tradeoff for buying his massive ship is that it is incredibly slow compared to the other two ship types.

How to Buy A Second Ship in Sea of Thieves?

You need to unlock a Legendary Title for you ship in Sea of Thieves to buy a second ship. You can do this by completing challenges while you’re sailing.

You’re not restricted to just purchasing a single ship if you can afford it. You can buy a Sloop, Brigante, and Galleon at the same time if you have the gold for it. However if you want to purchase a second ship of the same type, you need to unlock a Legendary Title for the ship that you own.

Seems like the players are enjoying the new Sea of Thieves Captaincy update. After learning how to buy ships in the game, the sea fights against other players have gotten more personal. This Youtube video from Blurbs shows it all.