Sea of Thieves Season Five: What You Need to Know 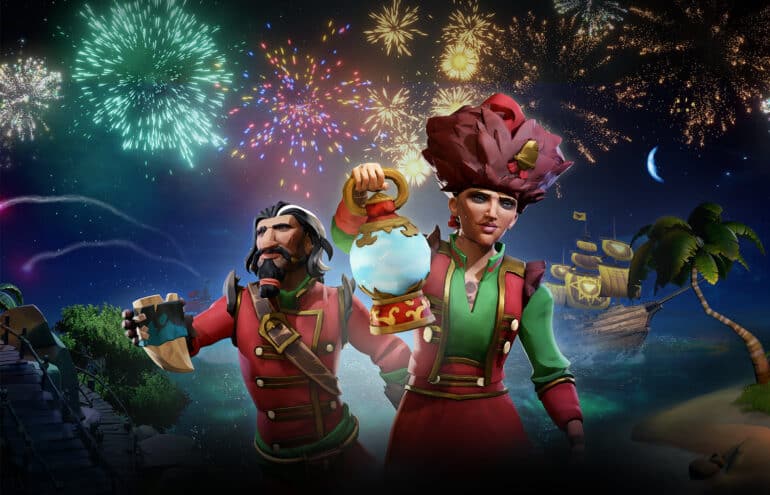 Rare has now announced Sea of Thieves Season Five and it comes with tons of new content to enjoy.

Season Five offers a suite of new tools, features, and quality of life updates for the game. Players can now bury their own treasure, use fireworks to light up the sky, and new ways to get immersed into the world of Sea of Thieves. Here are the things you need to know about this new season.

Sea of Thieves Season Five: Bury Your Own Treasure (Finally!)

After five seasons, Rare finally adds the ability that any fine pirate can do with their treasure: Bury it in their secret location! According to the developers, players can now bury almost any item now, which will create a special map that leads back to the loot. You can also personalize the treasure hunt experience by making it challenging with traps to prevent pirates to steal your treasure, or just post the map on the Quest Board to challenge other players. There is a reward for burying treasure though: earn Renown if other pirates find it successfully.

Players can now use fireworks to make the skies light up or use a signal flare to get some help from friends when you are in trouble. These can be found in barrels or can be bought from Merchant Alliance in themed Firework Crates. You can load this up in a cannon and fire it away to make the sky bright or just row out to sea and set it off in the distance.

Bond with other crew members by sitting or snoozing in locations all over the game. You can also discuss new adventures with your crew members and this time your character’s lips move when using the game chat. There is also the Rolling Dice Emotes that can be used for tabletop situations. There are also three new shanties to listen to.

Enemies can now drop ammo, Megalodon have markers now, Kraken have loot, and so many more.

This new season offers a new set of rewards that can be unlocked via earning Renown on the seas. Gain experience and Renown to gain new treasures, unlock cosmetics, gold, doubloons, and more. Players can also try the weekly and monthly Trials in order to boost Renown with the Season-long Trials. Complete the Daily Deeds to earn Seasonal Renown.

There will be new additions to the Pirate Emporium every month. Use your Ancient Coins to unlock ship liveries, emotes, pets, costumes, and many more. Complete the Plunder Pass for Seasonal reward boosts and special ranges celebrating other franchises. Visit the Emporium shopkeeper to keep track.

There are new time-limited Events coming with Season Five. To start, the annual end-of-year celebrations named Festival of Giving and Grogmany is happening soon. Donate loot to fellow crews in order to earn festive cosmetics and practice at the tavern to prepare for Grogmany.

Season Five Plunder Pass offers the new Boreal Aurora ship set and the Creeping Cold Costume. The latter transforms as you progress through the levels of Seasonal Renown. There is also the new Sand Angel Emote. There are about 14 all-new additions for the Plunder Pass.

As a new Season arrives, new free stuff comes with it together with the Twitch Drops. Just make sure your Twitch accounts are linked. Watch one of Rare’s streaming partners to get daily cosmetic drops.

Sea of Thieves is now available on PC, Xbox One, and Xbox Series X/S. Season Five is available right now.