A guide on how to play the Spices From the West minigame in Genshin Impact. 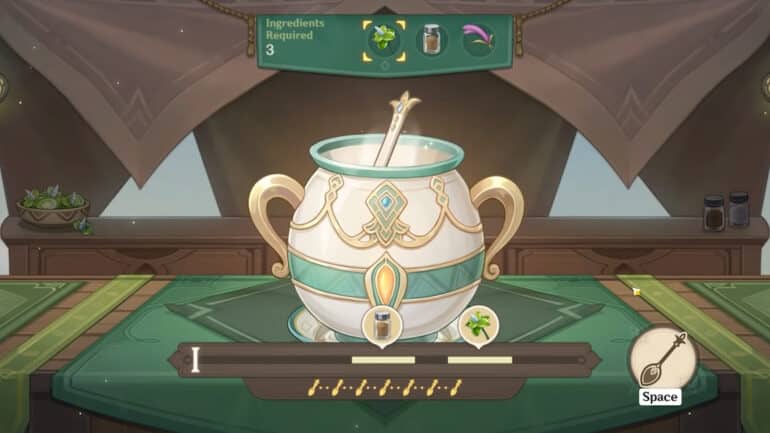 Spices From the West is a minigame that was added along with the newest Genshin Impact 2.6 update. In this minigame, players will be making special kinds of seasonings made from different kinds of ingredients that can be gathered in the world. With these seasonings, players can then create special dishes that they can present to other characters in the game.

What is the Spices From the West Event?

Liyue has welcomed a researcher from Sumeru who has come to undertake research on seasonings. Spices From the West Event is about making Fragrant Dishes with seasonings for your Serenitea Pot Companions to taste-test and earn Companion EXP again and again.

Spices From the West Release Date and Event Duration

Spices from the West was announced to be included in Genshin Impact version 2.6. Although no exact release date has been announced at this time, we will update this guide as soon as further information becomes available.

How to Play Spices From the West in Genshin Impact

The Spices From the West minigame will be about timing and making sure that you got the order of the ingredients right while mixing in order to create a seasoning successfully, and follow the steps outlined below:

You will first have to gather ingredients out in the wild to mix into your seasoning. If you are the packrat kind of player that has been gathering whatever plants or spices that you see since the beginning of time, this is a good opportunity for you to use them.

You will then have to choose what seasoning you would like to make from a list of seasoning recipes. The list will start off with a few recipes at first, but new recipes will gradually be unlocked over the course of the event, with all recipes becoming available before the event ends.

Play the Spices From the West Mixing Game

Once you have chosen a recipe, you will then have to mix the ingredients for it. But you don’t just dump everything in the pot and mix away! You will first have to pay attention to certain parts of the minigame.

Order of Mixing – Left to Right

Just above the pot are the ingredients to be mixed for the seasoning. The order of what to put inside the pot will start from the left most ingredient to right.

Below the mixing bar is a number of spoons which indicates the amount of times that the spoon will be moving around in the pot. Each time the pointer touches an end of the bar, it counts as one mixing attempt. Think of it as a timer; if you do not mix the ingredients in the proper manner before the number of mixing attempts run out, you will fail the minigame.

Once the mixing game starts, you will be presented with the ingredients on top in a set order. Your spoon will then start moving which is also indicated by the pointer that moves back and forth on the mixing bar. Ingredients will then show up one by one as sections occupying the mixing bar.

Your objective is to hit the spoon button once the pointer is in the section indicating the right ingredient. Once every ingredient has been placed in before the timer runs out, you will then be rewarded with the seasoning.

The number of attempts you have to make a seasoning is limited to three. Therefore, you must make as few mistakes as possible or else you will be forced to start again from the beginning. The key is to have a lot of spare ingredients. It’s best to add these ingredients to your grocery list so that you’ll have enough to use on your seasonings.

More seasoning recipes and ingredients will be added, so stay tuned!

You can then add the seasonings that you made on certain dishes to turn them into Fragrant Dishes.

These Fragrant Dishes can then be given to characters that you invite over to your Serenitea Pot to increase their companionship XP. This is a really great way to make use of those ingredients that you have stocked up in the pantry.

Invite guests from the Serenitea Pot to taste-test the recipes with you!

During the Spices From the West Event, Fragrant Dishes can be served to companions in the Serenitea Pot in order to raise their Companionship Level. Give the right Fragrant Dish to a character based on their preference to earn more XP and you will get a huge boost to your companionship level.

Spices From the West Event Rewards in Genshin Impact

Completing certain criteria from the Spices From the West minigame will reward you with the following: