The Devil in Me The Trial Walkthrough 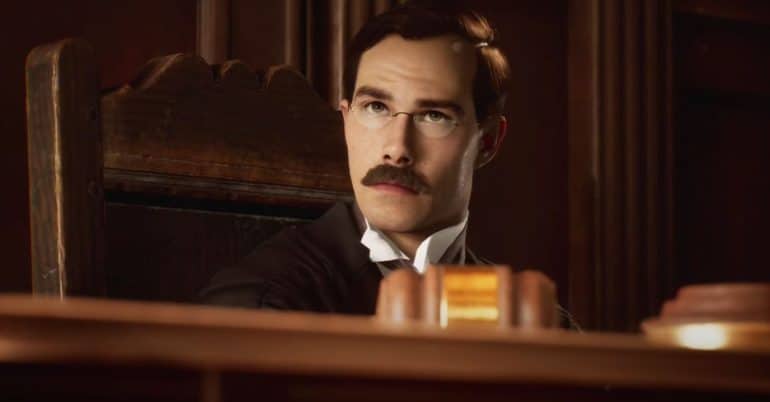 The Trial is one of the early chapters in The Dark Pictures Anthology: The Devil in Me. This is a chapter where you don’t actually do much but watch historical documentary to get a background on the game’s setting. On this guide, we’ll show you a walkthrough of The Trial chapter in The Devil in Me.

The chapter begins with Kate introducing herself in front of the camera followed by the rest of the Lonnit film crew. We get to learn about their backgrounds and what they do for the crew. We then get to see a jarring recreation of HH Holmes trial as he promises that even death will not stop him from killing.

On the trial scene, Kate explains most of what HH Holmes was known for as the first serial killer of America. She talks about his real name being Herman Webster Mudgett and that he professed to the murders of 27 people before he was hanged in the gallows for his crimes. Kate mentions that investigators were able to find evidence that Holmes’ murder may have gone nearly 200. We get to see some of Holmes’ victims in the prologue of the game which you can see in our The Dark Pictures Anthology: The Devil In Me Prologue Walkthrough guide.

Charlie then pauses the video to ask the crew what the think of the shot. However when Jamie is about to speak up, she is interrupted by a phone call from Grantham Du’Met who gives Charlie and his crew an offer.

This scene functions as the setup for the Lonnit film crew as the ones behind the “Architects of Murder” and their documentary into the horrific crimes of HH Holmes. Unfortunately it’s what catches the attention of a mysterious benefactor who invites them to a replica of the infamous Murder Castle where most of the game takes place.

And that’s the end of the The Trial chapter in The Devil in Me.

That’s our The Devil in Me The Trial Walkthrough. We hope this article was informative for you. For more on The Devil in Me, we have other content you may be interested in.

Check out this Youtube video from MKIceAndFire showing the full gameplay of The Dark Pictures Anthology: The Devil in Me without any commentary.