The Devil in Me Cast – Voice Actors for all characters

Meet The Dark Pictures Anthology: The Devil in Me voice actors. 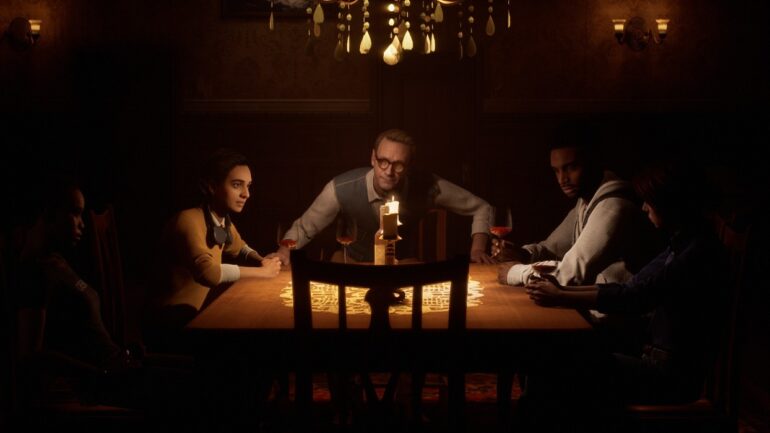 With Supermassive Games having exemplary performance on their previous works, you may be wondering as to who The Devil in Me Cast are. In order to make their games hyper realistic, the developers have opted for a complete motion capture acting with the characters in-game modeled after real life actors and The Dark Pictures Anthology: The Devil in Me is no different.

Here is a full list of The Devil in Me cast and who their voice actors are:

The Curator Voiced by Pip Torrens

Pip Torrens once again reprises his role as The Curator in The Devil in Me. He serves as the only reoccurring character in all of The Dark Pictures Anthology, only being absent in The Quarry as it is not considered part of the anthology. This sharply dressed man with the charismatic voice can be considered as a commentator for your actions in-between chapters despite having no powers to influence the narrative.

Charlie is the owner and founder of the Lonnit film crew and thus calls most of the shots. His full name is Charles Lonnit and he’s voiced by Paul Kayne who has done some acting for TV shows such as Doctor Who and even The Walking Dead. Charlie isn’t the most respected leader, often being a hothead and even prone to being inconsiderate of others, but he can show some compassion for his employees and put his life on the line to save them if the player chooses.

Kate is the defacto face of the Lonnit film crew which gives her some sway to butt heads with the boss himself. She is voiced by Jessie Buckley who is an experienced Irish singer and actress. Kate has grievances with how the film crew is treated and is looking for her way out. Her romantic past with one of the crew members only complicates things further

Mark is a soft spoken photographer of the Lonnit film crew who is voiced by Fehinti Balogun. He is the foremost expert when it comes to cinematography and often finds himself playing mediator between Charlie and the rest of the crew. Mark will have to shape up in order to keep himself and his friends alive.

Erin is the unwitting assistant of Charlie voiced by Nikki Patel who aspires to be something more for the Lonnit film crew. She particularly has a passion for editing audio and wants to convince the boss to let her do so instead of being just a glorified servant. Unfortunately her asthma leaves her in poor condition to survive the events of The Devil in Me.

Jamie is the go to technician of the Lonnit film crew and is voiced by Gloria Obianyo. Her ability to fix circuits and other technological hardware makes her a valuable asset to surviving the game’s horrific events. When she isn’t busy putting her skills to good use, Jamie can often be seen making sarcastic remarks or worrying about her fellow crew members.

Joseph Morello is a mysterious figure who is voiced by Abdul Salis and is somehow involved in the events that transpire The Devil in Me. Who he is and what his role is, no one can say.

Jeff is one of the unfortunate souls who happened upon the original World’s Fair Hotel run by HH Holmes. He and his wife fall victim to the hotel’s cruel machinations. And unfortunately neither have the chance to survive unlike the Lonnit film crew.

Marie is one of the unfortunate souls who happened upon the original World’s Fair Hotel run by HH Holmes. She and her husband fall victim to the hotel’s cruel machinations. And unfortunately neither have the chance to survive unlike the Lonnit film crew.

The infamous HH Holmes himself makes an appearance in The Devil in Me way before the events of the present. John Dagleish voices Holmes as a kind and thoughtful hotel host that bellies the dark monster inside. There’s a certain creepiness with the way HH Holmes eyes his would be victims.

That’s The Devil in Me Cast and their voice actors. We hope this article was informative. For more of The Dark Pictures Anthology: The Devil in Me, you’re already in the right place.

Check out this Youtube video from MKIceAndFire showing the full gameplay of The Dark Pictures Anthology: The Devil in Me without any commentary.