New card game to play while in Tamriel! 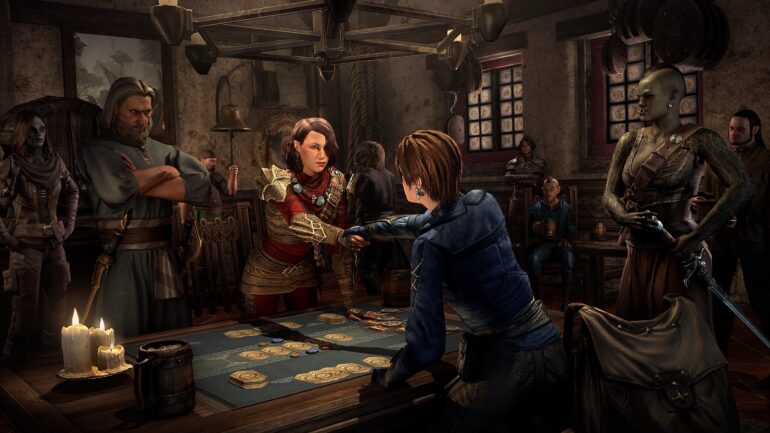 Tales of Tribute is a new game feature for ESO and has become quite popular in the taverns of Tamriel. According to Gameplay Lead Rob Garrett, the dev team looked for a potential new feature and quality life improvements for the game. For a long while they have added some new gameplay event with each annual Chapter release and also they had an interest of creating a new tavern game that could give fans recreation and relaxation. The end result was this new card game system.

Tales of Tribute is a two-player deck-building card game that can be played with other players or against NPCs in ESO. Players can achieve victory by gaining enough Victory Points or getting the favor of all four Patrons at once.

The Patrons are characters that needs to be impressed in order to gain another method of victory for the player. They are usually associated with a specific type of card and would ask players to do specific tasks to curry them favor. If they do get those tasks done, they can gain the favor of the Patron. If all Patrons are impressed, they win automatically.

The Tavern will provide players with cards that can be built into a deck to their liking. These cards can get them bonuses like coins, power, and other special abilities.

Requirements to Play the Card Game

In order to play Tales of Tribute, players will only need access to High Isle Chapter and complete the tutorial quest with at least one character on their account. They can play a match with friends on their list, guild members, and more. There are also many NPCs in the ESO world that can be challenged, just got the nearest tavern.

Gain new card decks by just participating in some activities like quests, public dungeons, and more. Some cards can be upgraded too by advancing the Tribute rank, completing specific achievements, and getting clues to help find Tribute stashes in the world.

What Do You Win?

If a player wins a match, they can get exclusive rewards like crafting materials, gold, transmutation crystals, home furnishings, pets, houseguests, and more.