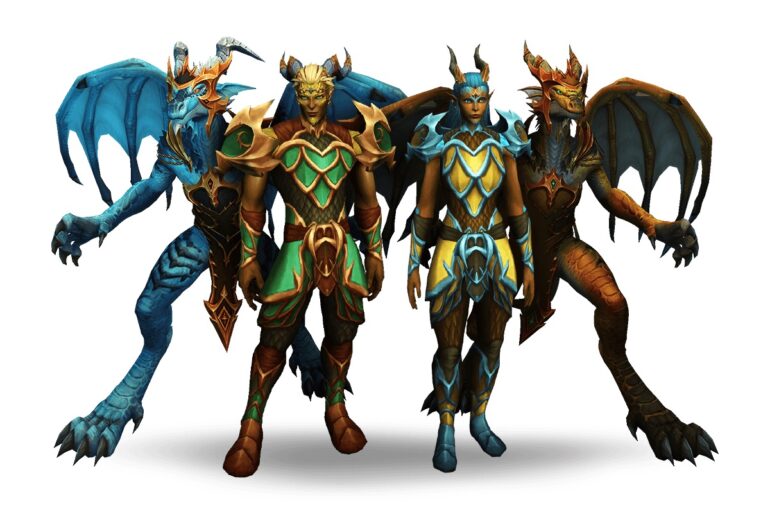 Blizzard has released new details of the World of Warcraft Dracthyr Evoker, the first race-and-class combo.

The Dracthyr Evoker is a combination of the new race with relations with the Dragons that appear in the newest cinematic trailer. They will be introduced in the upcoming World of Warcraft Expansion Dragonflight and will have some unique features that no other race or class will have.

The Dragons have the ability to change into two forms, which are the mighty Dragon form and the mortal form. The latter is used in order to explore areas that only humanoids can enter like buildings, towns, and such. The Dracthyr have the same trait of changing two forms, but in size they are quite smaller than the Dragons.

Dracthyr can customize both forms by choosing other races to mimic. This allows players to make their own Dracthyr but has some of its draconic features showing. For example, they can have the form of an elf but it can have eyes of a dragon, have some scales, horns, claws, and other traits. The Draconic form will be used to fight powerful enemies and overcome obstacles.

Dracthyr Can Choose Alliance or Horde

The Dracthyr Evokers will be able to choose their own destinies unlike other races. Players can either fight for the Horde or the Alliance if they want.

The Dracthyr Evoker has their own unique starting area where they can experience a different story focusing more on their race. They will learn how to use their abilities before they can go to the world.

Two Specializations to Choose From

The Dracthyr Evoker fights with claws, which has mid-range. It can also unleash powerful breath attacks called Devastation for long range battles. They can also heal others with their magic called Preservation.

The draconic abilities of the Dracthyr Evokers can be empowered via magic. They can charge up attacks and then release them at the right time in order to unleash maximum damage on enemies. If timed right, their foes would get toppled in seconds.

World of Warcraft Dragonflight has no release date yet. The game is now available on PC.