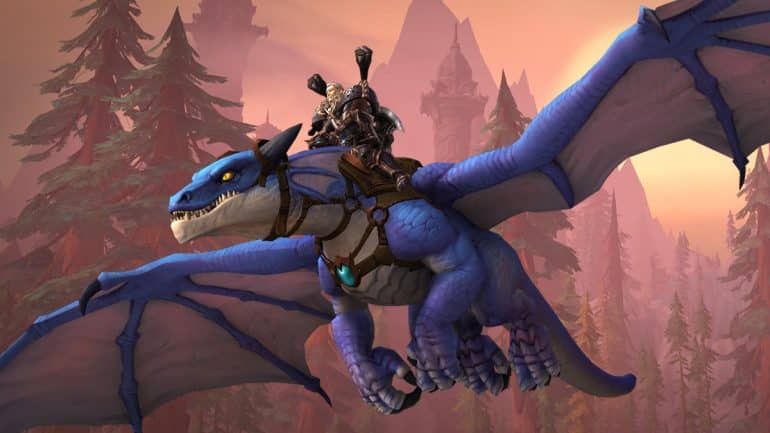 The new patch notes of the new Dragonflight update introduces various new content like the increase of the level cap, the Dragon Isles, dragonriding, major factions, new dungeons, and many more.

Ascend to new heights of power as you explore the Dragon Isles, earning new talents every step of the way to level 70.

Discover the Dragon Isles and explore four new zones—the Waking Shores, roiling with elemental power; the vast expanse of the Ohn’ahran Plains; the frosty peaks of the Azure Span; and the majestic spires and temples of Thaldraszus—each themed around and revealing more about the ancient dragon aspects.

SOAR THROUGH THE AIR WITH DRAGONRIDING

Dragonriding is an all-new skill-based method of aerial movement that allows players to take to the skies on the back of their personal Dragon Isles Drake. Players will customize their drake as they progress through the expansion, collecting more appearance options and enabling them to fly farther and faster.

Dragonflight ushers in a unique way to progress with Major Factions. Earn Reputation to unlock Renown ranks and access to rewards when you assist denizens of the Dragon Isles.

Four new level-up dungeons and four maximum-level dungeons await players who venture into the Dragon Isles. Whether you’re looking for loot, a new challenge, or to learn more about this ancient land, you’ll need to gather your courage— and your allies— for the trials ahead.

VAULT OF THE INCARNATES RAID

Venture into the ancient prison of the Primal Incarnates before their malevolent power can be unleashed against the Dragon Aspects.

AN EYE ON PROFESSIONS

Become a Dragon Isles artisan and fulfill crafting orders for your realm. Hunt down rare ingredients and create ever more wondrous items as you unlock specializations for your profession.

A new hotfix was also released. Here are the patch notes:

World of Warcraft is now available on PC. Dragonflight launches on November 28, 2022.