All Endings for Hooked On You: A Dead by Daylight Dating Sim

A guide for all the endings in Hooked On You: A Dead by Daylight Dating Sim. 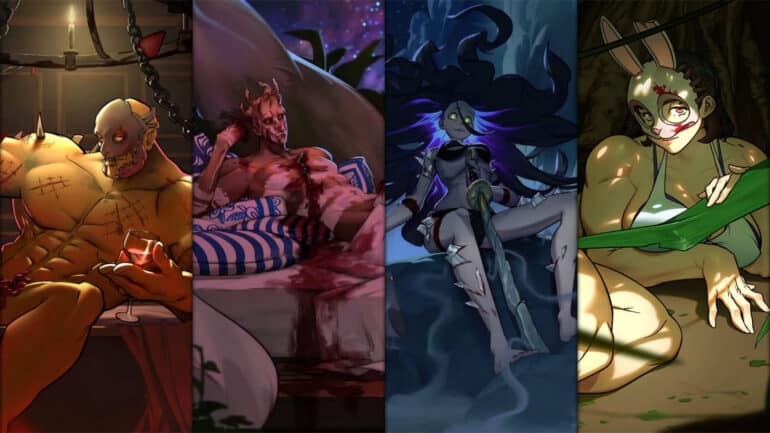 Hooked On You: A Dead by Daylight Sim has a couple of endings based on the player’s choices on which killer to take out on a date, and whether or not they’ll take their relationship to another level, or just selfishly break their hearts outright. The stories that lead to these endings, and the endings themselves are sure to get visual novel fans entertained, plus there are special and secret endings that have some interesting dialogues that are worth the effort to look for.

In this guide, we will be talking about all the endings in Hooked On You and share some details on how to reach them. Each of the main killers have their own separate in-depth route guides linked below.

How to get the Good Endings in Hooked On You

The Good Endings, also known as the True Endings, can be reached when you have gained a high level of affection towards a killer and you accept their love for you after spending three days with them. Not being able to fulfill any of these two criteria will either lead to the chosen killer’s bad ending or to the friendzone ending.

To raise the affection level for a chosen killer, you must select them at every possible moment (except during elimination rounds) and you must pick the response choices that will make them happy based on their character traits and their backstory. The mini games can also help raise your affection level depending on how good or bad your performance goes, however its impact is minimal.

Visual markers will tell whether or not the killer likes a decision or a response, which can range between ecstatic and happy, to uncertain, to even your MC’s death if the chosen killer really disliked your response.

There is no visible gauge that can tell how much affection level the chosen killer has towards you. But thankfully, the way that the endings are determined are quite distinct and forgiving (our guesstimate is getting >80% of the favorable answers will lead to a good ending). You can also create several save states any time in case you’re about to go into a choice dialogue and you want to explore the options.

Trapper’s good ending can be reached after gaining his affection and choosing Yes, I love Trapper! at the final choice dialogue. After chopping off Claudette’s head and giving it to you as a present, you’ll be rewarded with a pin-up image of an almost naked Trapper, but the real treat is actually the conversation that you’ll have between you, the narrator, and the Ocean.

Wraith’s good ending can be reached after gaining his affection and choosing Accept Wraith’s Love at the final choice dialogue. You then proceed to cut off his heart as part of the ritual, under Wraith’s wish. You then wake up next to a bloody Wraith, still alive with his chest sewn back up as you learn that the ritual did not work.

Spirit’s good ending can be reached after gaining her affection and choosing Kill him (Dwight) at the final choice dialogue. You then proceed to kill Dwight which makes Spirit happy and which also earns you the other killers’ respect.

Huntress’ good ending can be reached after gaining her affection and choosing “I LOVE YOU TOO!” at the final choice dialogue. The two of you then decide to go back into the cabin to start making a family. The scene ends with a half-naked Huntress as she invites you to roam the jungle with not even a single piece of clothing on.

How to get the Bad Endings in Hooked On You

The Bad Endings, also known as the Heartbreak Endings, will require you to break the heart of your chosen killer. This means that you will still have to make them gain enough affection towards you to be able to reach the final choice dialogue. Then, you have to reject them and break their hearts by choosing the other option between the two choices.

Trapper’s bad ending can be reached after gaining his affection and choosing No, I don’t love him. at the final choice dialogue. Trapper will then become anguished as he is not used to rejection, while his father laugh at his pain.

Wraith’s bad ending can be reached after gaining his affection and choosing Reject Wraith’s Love and then choosing Tell him the others were right about him at the final choice dialogue. Wraith will become so distraught with your decision that he just decides to wallow in his sadness.

Spirit’s bad ending can be reached after gaining her affection and choosing to Spare him (Dwight) and then choosing “I never loved you” at the final choice dialogue. Spirit will then become aghast at the rejection and remains in solitude as she plots her revenge towards what happened.

Huntress’ bad ending can be reached after gaining her affection and choosing LAUGH IN HER FACE! at the final choice dialogue. Huntress just drops on her knees at the beach, left wondering what went wrong.

The Friendzone Ending, also known as the Friends Forever Ending, is an ending where you never grew a relationship beyond being friends with any of the killers. This can be achieved by going for responses and actions that do not align well with what the killer wants.

Each killer has different mini scenes that all lead towards an ending where the killers are shown having fun while playing beach volleyball. Depending on who friendzoned you, you’ll either die or be kept alive.

There can be plenty of ways to do this, but the easiest way to to refer to our Killers’ ending guides and selection responses that are not listed as the solution. This can also be done by going for a different killer every day, or eliminating those that you’ve spent time with for a maximum twist.

The Jr. Deputy Entity Ending, also known as the For Better, For Worse Ending, requires you to have reached the good ending for all four killers at least once. The Entity will reveal itself to you, praising you for stealing all the killers’ hearts. Because of this, it will take a vacation and promotes you to Jr. Deputy Entity.

The Casanova Ending, also known as the Cold Blooded Ending, requires you to have broken each of the four killers’ hearts at least once. The Entity will show itself to you to congratulate you and dub you as The Casanova, the first killer in Dead by Daylight 2: Love Hurts.

The Trickster Ending, also known as the Completionist Ending, requires you to have reached all eight good and bad endings at least once. Trickster is the only killer that cannot be taken on a date, but as a special prize for going through all the major endings, you’ll get to have him – in keychain form.

The Killed Endings are not really considered as major endings, but rather just side endings where you meet your fate under the hands of the killers. They are still worth to get as each of them are tied to distinct achievements based on who kills you.

Trapper’s route has many opportunities where you can get killed. Just select an option that he does not like and consider yourself dead.

Wraith’s killed ending is special as he will only kill you at the final choice dialogue after rejecting his love and telling him that you’re not a killer.

Spirit’s route has many opportunities where you can get killed. Go for responses or actions where you try to make her drink alcohol.

Huntress’ route has many opportunities where you can get killed. Answers that patronize her or make her look like a weak individual will most likely get you killed.

Is there an ending for Claudette and Dwight?

No, Claudette and Dwight do not have their own special ending, but they do die a couple of times.

Check out this video by DStrike showing all the possible endings in Hooked On You: