Hunt the most dangerous predator in the game: her heart. 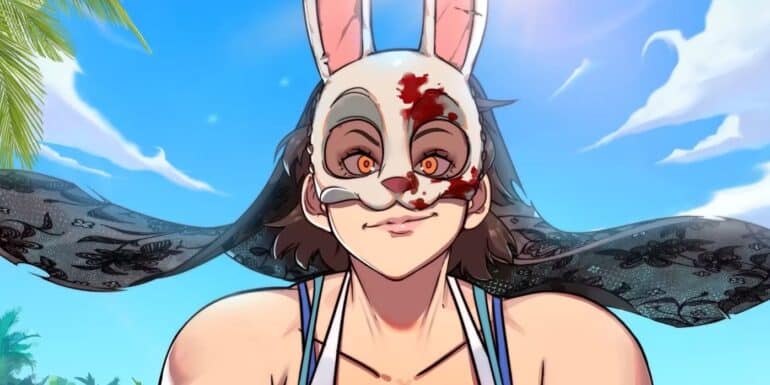 The Huntress is a bachelorette who you can choose to romance in the Hooked On You: Dead By Daylight Dating Sim. Notable for her tower tall height and bulging muscles, she’s certainly no slouch when it comes to any physical activity. You can use this Hooked On You Huntress romance guide to learn all the right choices to wooing her.

Day One Hooked On You Huntress Romance Choices

The first set of questions in the volleyball court won’t affect anything. However you need to answer these questions with the right answer in order to get to the Huntress romance route:

After picking Imagination, Huntress will put you into a minigame. You’ll have to land the hatchet in the right area as it rotates faster. Afterwards, you’ll play another minigame in the evening where you’ll have to carve meat. You don’t actually need to pass these minigames to romance Huntress. Just continue to pick the right choices.

You’ll then reach a point where Huntress will test your knowledge on mushrooms. She wants to see if you can tell which are edible and which aren’t. Most of the time, the answer is the mushroom that doesn’t look edible.

After you’ve made the choices on which mushrooms are edible, continue making the right ones for the night.

You have to help Huntress recover her stuff which was stolen by other killers. You’ll have to go to each of the four locations which happen to be the domain of the other killers, which also includes the bothersome Trickster. You’ll be asked to do a spinning minigame in each location. When you are going through the Trapper’s Cave, you need to pick the Underground Tunnel option to avoid being killed.

After recovering all of Huntress’ items, you’ll head back to her cabin where you’ll meet her mother. Make sure to pick the correct options.

After picking these options, you’re close to getting Huntress’ True Ending. You’ll go outside where Dwight and Claudette can be found. Huntress will offer to kill them for you and you have to pick “Absolutely.”

To get the Hooked On You Huntress romance ending, pick to say “I LOVE YOU TOO!” and you’ve won her heart.

That’s our Hooked On You Huntress Romance Guide to get the True Ending. We hope you found this article to be informative. Stay with us because we have more Hooked On You content.

Check out this Youtube video from DStrike giving a tutorial for how to unlock the True Ending for the Huntress in Hooked On You.