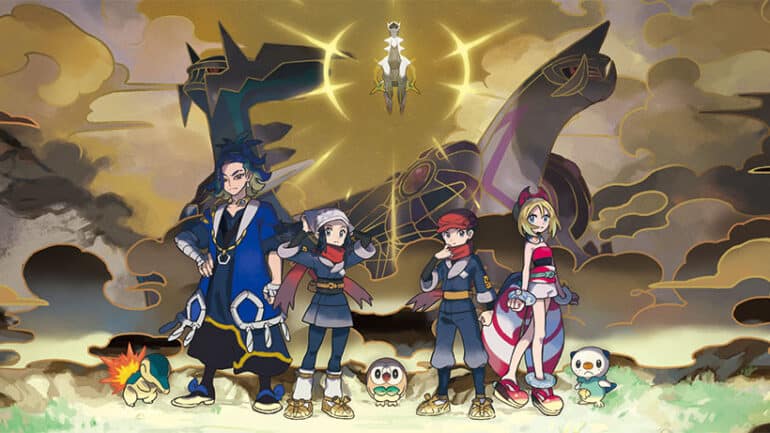 With new characters and clans in Pokémon Legends: Arceus, there are plenty of new names and faces, and some familiar ones, that you’ll meet along your journey in Hisui. Most of which will have something to impart to you to help solve the mystery of the space-time rift. Get to know them in this guide so that you’ll know who to go to.

This is you, the player, who was mysteriously whisked into the land of Hisui one day through the giant space-time rift in the sky. Depending on which gender you pick during character customization, you will either get Rei or Akari as your counterpart.

The Galaxy Expedition Team or Galaxy Team is a group made up of different members with their own specialties. Their main goal is to establish Jubilife Village in Hisui and to make sure that the inhabitants are protected against the hostile Pokémon of the land.

Commander Kamado is the leader of the Galaxy Expedition Team and is also essentially Jubilife’s village chief. He is in charge of deploying Galaxy Team members to survey or safeguard the land around the village. He is also the one who you report to as he commands you to investigate the anomaly.

Commander Kamado has quite a strict and strong personality and is fond of sumo, to the point that he sometimes throws other people to test them or in jest. It is also confirmed that he is the ancestor of Professor Rowan.

Captain Cyllene serves as the captain of Galaxy Team’s Survey Corps whose main objective is to gather information about the land and the Pokémon that inhabit it. She has a very serious and strict façade, but deep down she actually cares about her people. Also, she is scared of bug Pokémon.

Based from the hair and the eyes, Cyllene may probably be an ancestor of Cyrus, the boss of Team Galactic.

Professor Laventon is Hisui’s one and only Pokémon Professor. He helps out the Galaxy Team by working closely with the Survey Corps in studying the behavior and characteristics of the Pokémon that they meet. He’s the person to talk to whenever you have to report your progress with your Pokédex.

He has a very quirky and caring character and acts as some sort of a mentor to both Rei and Akari. Since he was confirmed to be a travelling professor and not a native to Hisui, judging by attire, he might have originated from Galar. It may also explain as to why the Galaxy Hall ends up with a smokestack that looks like a Galarian Weezing, probably a design influenced by the professor himself.

There are two other main groups of people living in different parts of Hisui, namely the Diamond Clan and the Pearl Clan. They both highly revere “Sinnoh” the godly figure that rules the land of Hisui, but they have different beliefs on whether Sinnoh represents the aspect of time or the aspect of space, hence the tension between the two clans and their rivaling leaders.

Each clan is lead by a clan leader who looks over their people and serves as the chief of the noble wardens.

Irida is the young leader of the Pearl Clan, and thus is the one who often talks to the leaders of the neighboring clans for important matters. She has a strong will and she doesn’t back down from challenges, which is why she often gets in an argument with Adaman.

Adaman is the leader of the Diamond Clan and is the spokesperson for important matters concerning the neighboring clans. He has a no-nonsense and cool attitude, yet he still argues with Irida when it comes to their beliefs.

Wardens are the individuals assigned to serve and protect the ruling noble Pokémon of the region. Each warden is assigned to one noble and will dedicate their life to make sure that the noble is well cared for.

There are ten wardens that you’ll meet through your journey; five of them are from the Diamond Clan, while the other five are from the Pearl Clan. In contrast with their leaders, the wardens don’t really have a hostile disposition to the other wardens of the opposing clan.

Mai serves as the warden to Wyrdeer. She’s also accompanied by her own Munchlax. She’s the first warden that you’ll meet and who will introduce you to Wyrdeer.

Arezu serves as the warden to Lilligant. She likes to help out in her own way, which puts her in danger sometimes. She evetually ends up as the assistant hairdresser of Jubilife’s salon.

Iscan serves as the warden to Basculegion. He’s fond of fishing, which is why he’s fit for his noble. Despite his strong appearance, he’s actually meek and gets easily scared of ghost Pokémon. He has grown affectionate to Palina, who he once saved from drowning, but they can’t be seen together due being part of the opposing clans.

Melli serves as the warden to Electrode. He has a egoistic and brash attitude towards other people and sometimes even gets into arguments with Adaman. Nonetheless, this Warden is dedicated to protecting their lord and acting in his best interests.

To beat Melli, you have to know that your encounter with him will take the form of a three-on-one Pokémon battle. What this implies is that Melli’s team will have more turns against your Pokémon, so it’s recommended that you set your moves to Agile Style in order to reduce the likelihood of his rounds stacking even more against you.

Due to the fact that Melli’s team is comprised of Poison type Pokémon, it is essential that you eliminate his team before they can begin spamming your Pokémon with Poison type moves.

Sabi serves as the warden to Braviary. She is a clairvoyant and has a playful attitude. She often makes other people think and doubt if she actually has psychic powers or not.

Lian serves as the warden to Kleavor. Despite his young looks, he’s acts very mature and serious. He’s also fond of mining and discovering new types of rocks and minerals.

Calaba serves as the warden to Ursaluna. She’s cynical, acts coldly and dismisses any help offered. Yet, as soon as she sees your intention after helping calm down Ursaluna from its rampage, warms up her attitude to you.

Palina served as the warden of the previous noble Arcanine, but due to an unfortunate accident at sea which took the life of the noble, she then became the caretaker of the two Growlithe pups that it left. She doesn’t believe in raising the one of the pups with the sole intent of replacing their late noble and because of this, she is shunned by her own clan. She has grown affectionate to Iscan after he saved her from drowning during that incident.

Your first encounter with Palina will be during the Lordless Island quest, which brings you to the Cobolt Coastlands.

Ingo serves as the warden to Sneasler, a noble Pokémon that will assist you in reaching Melli and Electrode at the summit of the mountain. Ingo is another another warden from the Pearl clan. Players may recognize him as one of the subway bosses in Black and White and its sequel. He seems to have gone through a harsh experience upon arriving into Hisui, as seen with his tattered coat.

Ingo doesn’t recall how he ended up in Hisui and can’t also recall where he came from and details about his previous life. Ingo has traveled back in time and has lost all memory of what has happened. Despite this, his urge to fight remains strong. He does end up remembering bits of details from the “present” time and unconsciously does his signature poses, as if by muscle memory.

Ingo himself is not a native of Hisui, and you may locate him in the training grounds in Jubilife Village, where he can be found training. Battles can be organized by him for you, which can be extremely helpful in not only leveling up your team, but also in completing your Pokédex.

Once you have completed the game, you will be able to request that he organize matches on the Training Ground in Jubilife Village. These battles are against a variety of trainers from the Hisui region as well as the Galaxy Team, and they present a more consistent challenge than the previous ones.

These encounters will provide your Pokémon with a substantial amount of experience, after the combat has concluded.

Gaeric serves as the warden to Avalugg. He’s a very tough and energetic person, to the point that he often exercises without a shirt on in the middle of the freezing Alabaster Icelands.

The Ginkgo Guild are a group of merchants who travel throughout the regions of Hisui to trade their goods and wares.

Volo is a wandering merchant of the Ginkgo Guild and is one of the people who you will often meet in your journey. He sometimes challenges you to a battle just to test your Pokémon.

He often tags along some of the missions of the Galaxy Team despite the mission not concerning him. Though no one questions it, it certainly raises suspicion as you’ll eventually learn about his secret in the latter part of the game.

These three sisters prefer living the life of a bandit outdoors where they can feel free from any responsibilities. Despite calling themselves sisters, they don’t seem to be blood relatives, as both Clover and Coin came from two different clans.

Charm is the eldest sister and is the leader of the group.

Clover is the middle sister and was once part of the Diamond Clan.

Coin is the youngest sister and was once part of the Pearl Clan.

There’s certainly quite a lot of things that you’ll learn from these people and their lives. Since they are pretty much the ancestors of the present day Sinnohans and not much have been revealed with the other characters’ ancestry, people in different parts of the internet are now speculating who is the ancestor of who just based on looks and on the lore they know.

Other Characters in Pokémon Legends: Arceus

Not much is known about Cogita and her origins, however she does provide crucial knowledge about the trials of the lake and how to get the Red Chain, an integral item that will be used in the latter part of the game. Also, Volo refers to her as Mistress Cogita, suggesting she’s of a noble family, though Cogita prefers to just be referred to by her name.

Check out this video by GatorEX looking into the ancestry of some of these characters: