A look on the new Hisuian forms of some of the Pokemon present in Pokemon Legends: Arceus. 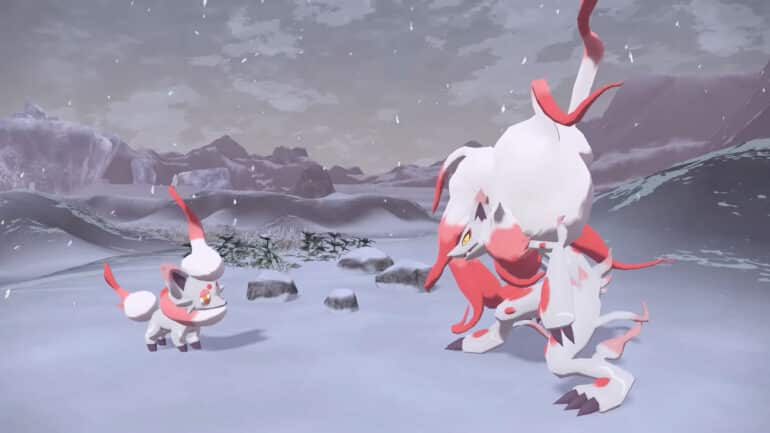 Pokémon Legends: Arceus regional variants, evolutions, and newly discovered Pokémon are sure to delight fans. Arceus brings us back into the land of Sinnoh, but back in a time when it was still known as Hisui and people were just starting to populate the land. The new settlers weren’t as fond or as close to Pokémon as compared to their current day successors, and therefore these people don’t know much about these creatures.

Enter you, the player, when you suddenly popped out from the massive and mysterious portal. You then join the Galaxy Team’s Survey Corps division and are tasked to gather information about these Pokémon in the vast lands of Hisui through various means. On your journey, you meet a lot of familiar Pokémon, as well as new ones and ones that seemingly take on a different appearance from what you’ve known.

The “new” variants aren’t actually referred to as “Hisuians” in game, they’re just referred to what they are like a Growlithe or an Arcanine. But for the sake of distinction, these Pokémon are given the Hisuian title. In this article, we’re going to look at the Hisuian Pokémon and compare them to their regular counterparts.

Growlithe’s Hisuian form is a cute pup. This lovely creature is a savage. It always guards its land with a mate, but it is not used to people. While building trust with a Hisuian Growlithe takes time, we imagine their loyalty is unparalleled once gained.

Hisuian Growlithe has incredibly soft fur, softer than previous forms of the Pokémon. This fur is a wonderful insulator. This adaption keeps it active even in the cold weather. This Growlithe’s horn is made of rock, but it is brittle. So the Hisuian Growlithe only uses it when it is needed.

New Pokémon Legends: Arceus regional variety Hisuian Voltorb Like Voltorb, this Pokémon looks like a Pokéball. During Arceus’ reign, Pokéballs were constructed of wood. So Voltorb gets a wooden makeover. “It appears extremely similar to Poké Balls of the Hisui region, with the wood-grain-like makeup of its body and the opening on top of its head,” the official website says.

This new Voltorb regional variation is also very friendly if it’s in a good mood. When overexcited, it can accidently discharge stored electricity. It often stuns humans and Pokémon alike.

“Hisuian Voltorb seems to be full of seeds.” It spouts these seeds from its head hole.” No one knows how the Voltorb looks inside because it’s so dark. We think it’s a little impolite to try and glimpse inside a Pokémon.

Zorua is a fox-like Pokémon that can transform at will. But they are illusions, as its basic skillsets and powers remain unchanged.

Zorua is a timid creature who relies on illusions. To keep secure, it hides its form. It will sometimes disguise itself as a youngster to find food. That includes children, especially talkative children. It’s often silent in its child stage. If its tail is touched, it reverts to a Zorua. This bashful Pokémon is prone to mischief.

Humans despised the Pokémon for creating eerie illusions, driving these Hisuian Zorua to the Hisui area. But these Zorua died due to the rough Hisuian land and battles with other Pokémon. Their spirits were reincarnated as Ghosts, fueled by their vengeance.

Zoruas evolves into Zoroark. Like a fox, Zoroark is bipedal. It also has a thick mane that resembles a ponytail. This is also true of Hisuian Zoroark.

The main strength of Zoroark is its realistic illusions. It utilizes them to hide and guard its den. Like Zorua, Zoroark only makes illusions. But they’re mighty. It can speak when it becomes a person. The Hisuian Zoroark showed how its assault illusions may trick cameras.

These terrifying illusions are created by the Hisuian Zoroark. And this Zororark may harm its opponents both inside and out with its illusions. Their expressions are so vile against everything on this planet that individuals who view them are reported to be driven insane by fright.

While the Hisuian Zoroark is extremely violent against people and Pokémon, it looks to be exceedingly protective of those it loves. If somebody harms its chosen brood, it may carry grudges. Trainers beware: Zoroark is said to “punish anyone who seek to catch it by trapping them in an illusion.” Those who acquire its trust get an ally.

Hisuian Braviary’s shape is beautiful. When Rufflet survives in the harsh Hisuian environment, they evolve into this creature with huge wings.

The Hisuian Braviary comes to Hisui in the winter. Unlike previous Braviary forms, it lives alone. It’s also bigger than some. Hisuian Braviary’s screeches have psychic properties. Its uncanny calls might cause shockwaves. Torn apart by sharp talons after weakening its prey.

The Hisuian Braviary is a Psychic/Flying-type Pokémon from the ‘Battle Cry’ category. It stands at 5’7” and weighs 95.7lbs. Currently, it appears that this Arceus regional Braviary will develop from a Rufflet.

Reportedly, this Pokémon can “enter a trance that enhances its physical abilities” using its psychic power.

These are forms which can only be obtained by getting the orbs required to change their forms. These orbs can be acquired by defeating both clan heads in a post-game side quest.

Aside from the Hisuian forms, there’s also another regional variant present in the game, albeit just for a single evo line. There is a side quest where you will be required to find Alolan Vulpixes and once you complete it, you’ll get your own Alolan Vulpix when you can then evolve to an Alolan Ninetales. You can check our guide on that particular side quest right here: How to get an Alolan Vulpix | Pokémon Legends: Arceus.

There have been plans that Pokémon Legends: Arceus will also get connected with the Pokémon Home service some time in the future, so perhaps there might come a time that we’ll see more Pokémon variant in the same space. It may even come through a paid DLC like in Sword and Shield, though we would appreciate it more if it’s done through game updates instead.

Credits to RoiDadadou for the Hisuian images.

Also check out this video by MELOO on All New Pokémon & Hisuan Forms and their Locations: