A guide on how to defeat Arcanine, The Lord of the Isles. 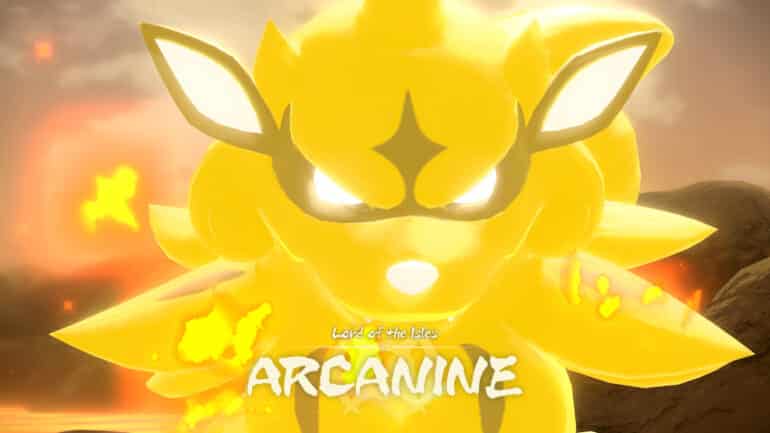 Arcanine, or who was once the late lord’s puppy Growlithe, is the third frenzied noble that you’ll have to face in Pokémon Legends: Arceus. The fight is quite a challenging and fiery one as you try to dodge Arcanine’s attacks while on a platform surrounded by molten lava. In this guide, we will look into his attacks to learn how to easily beat the Lord of the Isles.

The quest starts right after you manage to learn how to summon Basculegion. Palina arrives with the late lord’s Growlithes to check up on Iscan. Suddenly, the Miss Fortune Sisters arrive and kidnaps the larger Growlithe. They take the Growlithe to Firespit Island to force it to evolve into Arcanine so that the region will once again have a lord.

You then travel to the Molten Arena to try and rescue the Pokémon when suddenly, the smaller Growlithe tries to confront the sisters. Its courage alone triggered it to evolve into an Arcanine. A few moments later, it gets hit by the strange lightning bolt, making it go into a frenzy. You back out for the mean time to prepare the balms that will quell him.

How to Beat Arcanine Boss Fight

In order to defeat Arcanine, you’ll have to quell its frenzy by throwing balms at it. The fight will be more challenging than the previous ones due to the shape of the arena which limits the space of your movement, plus Arcanine will lay down flames on the ground that deal burn damage.

Arcanine’s Attacks and How to Avoid Them

Arcanine lowers its body down as it prepares to dash forward. It then charges at full speed towards one of the four outer sections of the arena.

How to avoid: This attack just goes straight and since it doesn’t swerve, you can easily do a sidestep to clear yourself from its charge. You may also dodge through it with the right timing.

Do try to stay close to the middle section, but not directly in the center. Arcanine can dash over the lava if you are in an adjacent section from where he’s at, which will give you a smaller window to react and dodge. Staying close to the middle while it looks at you will coax it to charge across to the opposite side of the arena.

If it’s the final half of the fight and flames have occupied the middle section, then take advantage of the i-frames and try to time your dodges towards Arcanine as he charges.

Arcanine raises its head upward, jumps high, and then crashes down towards the center of the arena with a small AoE shockwave. In the latter half of the fight, this attack will leave a pool of flames that engulfs the entire middle section for the rest of the fight.

How to avoid: As soon as Arcanine jumps into the air, move to any of the four outer sections. You may have to do two dodge from the center of the arena, that is if you manage to do the first dodge very early. Otherwise, stay in between the middle area and the outer sections.

In the final half of the fight, once the pool of flame is in the middle, you may find yourself stuck in one section while Arcanine is summoning fireballs in the opposite side of the arena. Lobbing the balms may help, however most of them won’t land on Arcanine.

Arcanine charges five fireballs above its head. After a few seconds of charging, he will then erupt into a large flame tornado which can potentially black out the player.

How to avoid: As soon as the fireballs show up, throw balms at Arcanine. You only need to land five balms, one per fireball to cancel the attack and stun him. If the flames in the middle of the arena is keeping you from reaching Arcanine, you can risk getting hurt by the flames and move to an adjacent and closer side, or try to get as close to the flames and lob balms at it.

Aim at the height of around 4 Arcanines high (imagine 3 more Arcanines stacked up on him) then throw your balms. Because of the high angle, the balms will take a while before they hit, so make sure you throw enough to cancel the attack in time or just enough to deplete his frenzy bar.

Arcanine Weaknesses and How to Counter

Hisuian Arcanine has a Fire/Rock typing, which makes it four times weak against Ground or Water attacks, while Rock and Fighting attacks are super effective against it. The noble that you’ll be fighting is at level 36.

Rhyhorn can be found in Bolderoll Slope or in Diamond Heath in the Crimson Mirelands, while Rhydons can sometimes spawn within space-time distortions and both these two deal good Ground attacks. You’ll also encounter plenty of Water-type Pokémon in the Cobalt Coastlands as you make your way to Firespit Island.

Though it is still possible to just use balms alone, it is highly recommended to send out Pokémon to fight Arcanine whenever you can. The subsequent stuns will provide plenty of opening to whittle down more of his frenzy bar, plus it’s a bad idea to prolong the fight in a very limited space.

Once Arcanine’s frenzy has been quelled, it will come back to its senses and give you the Flame Plate, an item used by Arceus to gain the power of the Fire type.

Can this Arcanine be Captured?

No, this Arcanine can’t be captured since he’s one of the noble Pokémon. If you wish to get your own Hisuian Arcanine, you can travel to Windbreak Stand at the Cobalt Coastlands during the day and capture a Hisuian Growlithe (more of them spawn during a sunny weather). The Fire Stone that you’ll use to evolve it can be picked up from space-time distortions or from breaking rocks in the fields. They can also be obtained from the Trading Post in exchange for Merit Points.

Check out this video by ZaFrostPet on how to beat Arcanine: