A choice in As Dusk Falls can be consequential. 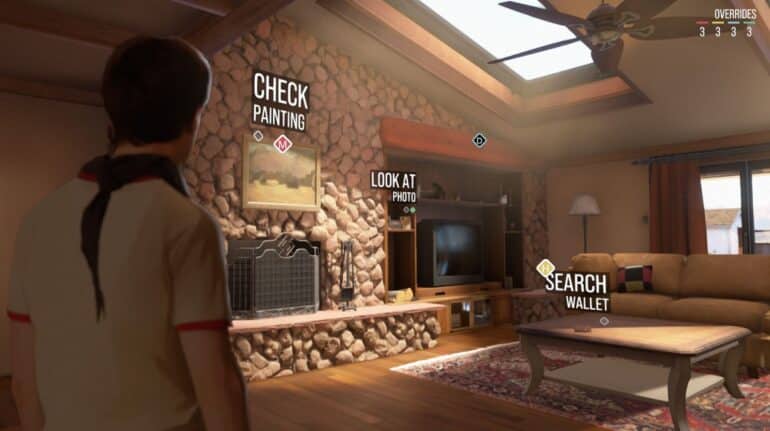 As Dusk Falls Crossroads are choices you have to make that give you separate outcomes. These choices will have serious consequences down the line so you’ll need to choose wisely. This guide will help you learn each consequence of each crossroad decision. Beware of spoilers, of course!

Here are all the As Dusk Falls Crossroad choices and the consequences you get for choosing them:

At the motel, Michelle sits down with her shoulders sore. As Vince agrees to give her massage, Jim comes into the room and request your time. He cites that Zeus needs to pee and he wants to talk to you.

Go With Jim or Stay With Michelle?

A group of robbers arrive at the motel, and orders Vince to get on the ground. Tyler points a gun at Vince.

Jay finds the safe behind the bookcase. The code is no longer in his back pocket.

Jay gets caught by the sheriff. He has Dale on his knees and calling for backup.

Fight Off Sherriff or Run To The Door?

Tyler and Dale now have the tables turned on them. Joyce asks you to point the shotgun you grabbed at them.

Drop It or Point It?

Dale is angry and demands that Zeus shuts up. He’s throwing stuff your way.

Joyce is provoking Dale. She’s getting closer to him.

Ask Joyce To Back Off or Quiet Zeus?

Tyler comes back and sees that Vince’s van has luggage. He demands Vince tell him the truth.

My Family or Just My Dad?

Vince sees the locket of Joyce on the ground from the time Dale punched her. He can leave it there for the cop to find or hide it.

Tyler grabs Michelle as hostage and threatens to kill her. He tells Vince to ensure no cops are following them and they’ll leave her at a payphone if they’re not followed.

Vince has Tyler in the crosshairs of his own shotgun. What happens next is a difficult choice.

After calling being placed in the backrooms, Vince and Michelle are duck tapped together. Vince has to reach the phone to get to Dante.

Vince successfully rescues his family and Joyce. The cops make their way inside the motel. You have a chance of escape.

Run For It or Stay Hidden?

In a flashback, Vince confronts Michelle about a potential extramarital affair. He’s suspicious. Michelle is trying hard to avoid the topic.

Okay, I’m Sorry or No, There’s More To This?

Sheriff Dante is making an exchange for one hostage. You have to choose to send Jim or Zoe.

Joyce and Paul are asking for pizzas. Dale says no and is angry. You can try to butter him up or demand pizza.

Dale takes Vince outside the front to talk to Sheriff Dante. Vince notices that there’s a sniper pointed at his head by the water tower.

Sharon comes into the Motel. She makes a deal with Vince that she’ll take care of his family of he cooperates with her boys.

Don’t Warn Her or Warn About Pager?

In a flashback, a strange man comes as Jay is having a drink. He talks about his father’s gambling debts. And offers that the watch Jay has will give them time to repay his father’s debts.

Keep Watch or Give Watch?

Vince sits down with Michelle and talks about the gag order from the airline. He’s decided what to do.

Sue the Airline or Take the Money?

In a flashback, Bear takes Jay into the forest. The real reason is to help him bury a body. Turns out the Stranger is still alive.

In a flashback, Jay runs Bear as the man is trying to kill himself. He has the option to stop him.

Just Leave or Cut Him Down?

Vince has a gun raised on Sharon and Tyler. They have Zoe captured.

Lower It or Keep It Raised?

Zoe wants to leave the car. Jay gets the option to choose to let her go.

Ash is in the forest. It’s night time and he’s hungry. The choices here depend on whether you eat the candy. A boar will come out of the woods later.

Jay in inside the Vanessa’s house. Her dad comes home and he has a chance to sneak out. Or say goodbye.

Sneak Out or Say Goodbye?

In a flashback, Ash hears Bear coming inside the house. He can hide in the closet or under the bed.

Hide In Closet or Hide Under Bed?

Sheriff Dante finds Ash on the road. He asks Ash what happened to him.

Tyler is chasing Jay through the woods. Jay climbs up a tree to save himself and Tyler slips in pursuit.

Stomp Fingers or Save Tyler?

Sharon is sneaking up on Dante. She has picked up a pair of scissors and intends to stab him.

Jay finds Vanessa inside Todd’s room. She’s drugged and Todd seems to be taking advantage of her. Vanessa might not be in any position to think for herself.

Hit Him or Leave Them?

In a fight with Todd, Jay can picks up a bottle. Todd is hysterical.

Leave Him or Bottle Him?

Jay and Vanessa are resting by the cliff in the forest. Vanessa asks him if he’s telling the truth.

Don’t Risk It or Come Clean?

Jay tells Vanessa the truth. He can ask her to stay with him or leave.

I Want You Here or It’s Best If You Go?

After Jay asks Vanessa to stay with him, she makes him promise never to hurt anyone like he did with Todd.

Make The Promise or Let Her Leave?

Jay and (possibly Vanessa) are stuck in the road being inspected by a cop. Jay doesn’t have a driver’s license and the cop waits tries to confirm the license plates.

Peel Out or Wait For Cop?

If Vanessa came with Jay, both will have to jump to get across the border. But Vanessa’s father pleads with her not to.

Jump Without Her or Jump Together?

An older Zoe confronts Jay in Canada. They talk about the events of the game. Players have the opportunity to find out about what happened to the other characters.

Your Family Ruined My Life or I Don’t Hate You?

After forgiving Jay, he asks Zoe if he’s broken.

No You’re Not or Who Isn’t?

If Zoe doesn’t says the Holt family ruined her life, Jay tells her there’s a signal booster at the top of the house. She can turn him in or let it go.

Turn Him In or Forgive Him?

That’s our As Dusk Falls Crossroad Choices and Consequences guide. There are many decisions to make in the game so this guide is still a work in progress. We hope you found this article to be informative and got the best ending you can have for this game.

We have more As Dusk Falls content for you.

Check out this behind-the-scenes footage for As Dusk Falls from the Xbox Youtube channel.