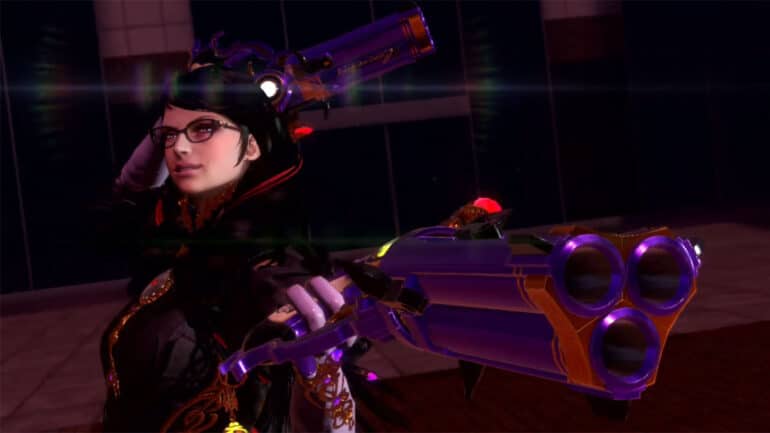 City on Fire is the second chapter in Bayonetta 3 where Bayonetta follows the trail of the invading homunculi and gets transported to Tokyo. She will eventually meet another infernal who will help her traverse the city in ruins.

In this guide, we will go through Chapter 2: City on Fire, listing along any collectibles as well as Bewitchments that can be acquired in the chapter.

After the cutscene showing a different version of Bayonetta, continue forward and you’ll meet with Phantasmaraneae who you can summon for the next fight.

For the first fight, you will need to fight two beloved. Summon Phantasmaraneae to get help in clearing them out.

Head towards the right in the train station platform to find the record.

Check inside the train carriage across the shed where the record is.

Go towards the left side near the burning building and use Phantasmaraneae to get through the fire, climb up the side of the building, and open the chest where the Broken Witch Heart #1 is.

Approach the building that shows MC Enzo’s show to unlock the Watch MC Enzo’s Show On The Giant Monitor Bewitchment.

Proceed forward to the next cutscene to enter the next battle. You’ll have to fight flying enemies called Lacunosus. They can be incapacitated by Phantasmaraneae’s web so that you can easily hit them. Clear out all the other enemies to proceed.

Go to the circular building to find the crow perched on top. Depending on where you approach it, it will either fly to the left (circle) or to the right (straight). The easiest way is to coax it to fly to the left so that it circles around and you can intercept it quickly.

Just beside the circular building is a parking lot where the cat is. Use Demon Pulse to dash and quickly chase the cat. You can also destroy the trucks that are in the way.

You can use Phantasmaraneae to scare the cats three times to unlock the Scare stray cats with Infernal Demons 3 times Bewitchment.

At the very back of the parking lot to the right, you’ll find a card pack.

Just nearby the parking lot is a cube for the time trial. Go to the checkpoints in time to get a Broken Witch Heart #2.

Head to the building that has burning upper floors near the circular building where you can find a scurrier carrying a Broken Witch Heart #3.

Head to the building with the blue square billboard and climb it. You’ll find the portal to verse #3. In this challenge, you need to use Phantasmaraneae’s Massive Web, then burn the enemies caught in it. You need to do this eight times to complete the challenge, then you will be rewarded with a Moon Pearl Fragment.

Move towards another burning part further into the city. Use Phantasmaraneae to climb up the huge water tank on top of the building to douse the flames and get access to the other side. As you cross, you will be ambushed by the next encounter. Clear them out to complete the verse.

From the point where you entered for the previous verse, do a U-turn towards the left to see another portal that was visible from the area before. In this verse, you cannot do any torture attacks, so you will need to activate Witch Time by doing a perfect evade. You can also use your summons during Witch Time to kill the enemies quickly. Completing the challenge will reward you with a Broken Witch Heart #4.

Head to the next area through the foggy streets. To the right, you can find another access to The Gates of Hell to stop by and purchase items or accessories.

The next verse is just past the short cutscene where Bayonetta hears Viola’s voice. Asperatus will burst out of the billboard on the left. Pay attention to its charge and time your evades to get free hits in Witch Time. Look out for its ground smash attack when it jumps high; a green circle will appear on the ground where it will land.

You can also use the Massive Web attack and successfully doing it thrice will unlock the Stop Aspertus with Massive Web 3 times Bewitchment.

This verse will have you riding Phantasmaraneae through the rooftops of the buildings while fighting enemies. Once you arrive on top of a building overseeing two helipads, go to the upright helipad on the right first to get a Broken Witch Heart #5, then continue moving to the other helipad.

You’ll reach a curved road with two of those purple trees. Approach them to unlock the Take a specific path while riding Phantasmaraneae Bewitchment.

Continue moving through the buildings as you’re being chased by another giant homunculus. You’ll also have to do some QTEs along the way, especially during the swinging part. If you manage to reach the edge of the run without falling into the clouds, you will unlock the Ride Phantasmaraneae without falling into any pits or clouds of erasure Bewitchment.

After the cutscene, turn around and you’ll see a cube on top of the debris. Hit it to reveal a platform. Climb the platforms ahead to get the figure box.

Just as you’re about to reach the huge buildings, go to the debris on the left and you’ll start hearing croaking noises. The toad is just somewhere within the middle of the debris.

This verse has another Pannus, so avoid using your summons to hit it.

After killing the Pannus, a cutscene will show the Twilight Wanderer Strider. It’s a quite powerful and agile enemy that can destroy your summons in one hit. To defeat it, it’s best to take advantage of your Witch Time and use your summons only while in it. Immediately retreat them once you’re back in normal time to prevent them from getting hit.

Once you manage to subdue it, it will get empowered by moonlight and enter its second phase where the fight will take place on the side of the building. Continue doing the same technique until you enter another cutscene where Bayonetta finally subdues it, but it will flee away.

Check out this video by omegaevolution showing gameplay for Chapter 2: