Massive content incoming to both Warzone and Vanguard later this month and in preparation for Operation Monarch. 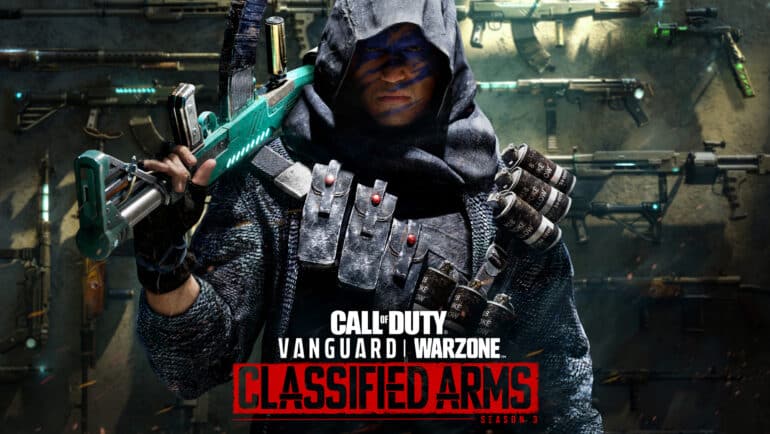 Activision has officially revealed Call of Duty Vanguard and Warzone Season 3 Classified Arms with massive content for both titles.

The third season is going to be called Classified Arms for Warzone and Vanguard. It will offer new content including prototype weaponry, updated Points of Interest on Caldera, S.O.T.F Harpy, and how Godzilla and King Kong will make an appearance during Operation Monarch.

The S.O.T.F 008 find a treasure trove of secret prototype weapons on Caldera, but the question remains: what are these weapons used for? This is the top-secret armor that will be open for all Operators during Classified Arms, which will launch soon this month. They will need to gather all the weapons they can get before Godzilla and King Kong arrive on Operation Monarch later in May 11, 2022.

There will be a new point of interest to visit in Warzone, which is the Dig Site. It will be located in between the Mine and Ruins. Players can check out some abandoned excavation equipment, tents, and massive skeletons for Supply boxes and other items.

The northern aircraft Runway and its stronghold on the Peak have been updated with new fortifications. The Lagoon has now revealed a new path to the Lighthouse.

All of the buildings on the Peak have been fully built up and got new paint with symbols of Monarch. Operators can explore this point of interest for Supply Boxes, Contracts, and more.

The Runway now has a set of barracks, hangars, and other structural additions. It will also have some decommissioned planes that can be used as cover. Guard towers and water towers are found here as well.

The Lagoon has revealed a new path to the Lighthouse as the tides shifted. This new sandbar as multiple moored ships to explore or for cover. Vehicles can also travel over this area just be careful on driving.

Operation Monarch will not begin until 9 AM PT on May 11, 2022. Gather all the weapons and ammunition needed for the upcoming event. Discover ancient artifacts, Monarch Research equipment and tents as well.

The new Gulag by Toys for Bob is set in the belly of a ship moored just off the coast of Caldera. The mines under Caldera is not the location for the Gulag anymore.

Enjoy four new Classified Arms to collect with two of them available with Battle Pass.

Three new Operators are joining soon. These are:

There will be two maps to check out when the new season comes in. these are Mayhem and Sphere.

This is a new Field Upgrade familiar to Call of Duty veterans. This is a prototypical version of a modern portable defense tool. It can intercept frag grenades, sticky bombs, and no. 69 stun grenades while in the air before they reach the area around the Trophy System.

It will be available immediately without the need of Battle Pass progress.

Check out numerous unique rewards including weapon blueprint and camos. There are two new fully configured weapon blueprints for one SMG and one Assault Rifle. Two black and orange camos are available too. There are other rewards too like Charms, Emblems, and more rewards for Ranked Play.

All of the weapons that can be acquired in the new Battle Pass can be used in the Zombies Loadout. There are also 20 new Zombies Season Challenges including unique Calling Card and XP bonus rewards. The KG M40 and Whitley weapons are earnable from Season Two via new Weapon Unlock Challenges in Zombies.

Call of Duty Vanguard and Warzone are available on PC, PS4, PS5, Xbox One, and Xbox Series X/S.