A guide about the Shadow Activities in Diablo Immortal. 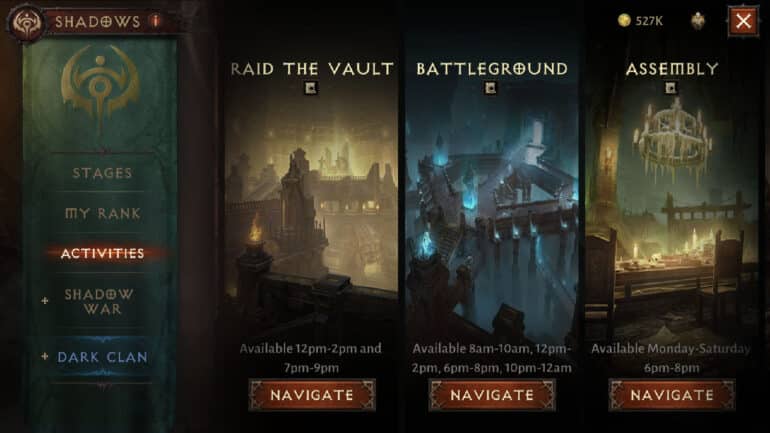 While playing as a Shadow in a Cycle of Strife, players have a couple of Shadow Activities that they can do to help raise their own rank and influence amongst the faction, as well as contribute to the overall power of the Shadows. Doing these activities constantly will help the Shadows’ progression towards eventually overthrowing the reigning Immortals.

In this guide, we will be talking about the different Shadow Activities and how they work.

There are plenty of activities that Shadows can do. Most of them offer great rewards for self-progression, while others help the entire Shadow faction gain the upper hand against the Immortals.

The Shadow Lottery happens everyday on 12 pm, 6pm, and 9pm server time and registration lasts for an hour.

Shadows who have already joined the faction can still join the lottery and if they win, they will get an Akeba’s Signet which they can use to recruit other Adventurers into joining the Shadows. Akeba’s Signet is also used to promote a Clan into a Dark Clan.

Contracts are special Shadow missions that reward a bunch of gold, XP, and random equipment. Completing contracts also reward Marks which count towards the collective progress of the faction.

A contract can be accepted from Bartender Bailer over at the Wolf City Tavern any time. Only one contract can be taken at a time, with a daily limit of 3 and a weekly cap of 5 contracts.

The Path of Blood is a gauntlet challenge where Shadows have to go through floors and defeat all the threats in it within a limited time. Each floor gets progressively harder, but the amount of Marks that you get for clearing them also increase.

To access the Path of Blood, head to the Court of Whispers and talk to Path of Blood Guide Nuon. It can be accessed any time, but it can only be done solo.

The Raid the Vault is a co-op mode where a party of four has infiltrate the Immortals’ vault where they store all their relics and equipment. As the party defeats the vault’s security, they will collect a material called Essentia. The amount of Essentia the party can stash in the current vault will be the same amount that the Immortals will lose theirs.

To access the Raid the Vault activity, talk to Master Vault Raider Fyggus at the Court of Whispers during 12pm-2pm and 7pm-9pm each day.

Battleground is a PvP mode between the Adventurers. Any Adventurer, may they be a Shadow, an Immortal, or neither of the two, can join as this activity serves as a training ground for the Rite of Exile. The gameplay of this activity is similar to a MOBA mixed with a Push the Load mechanic.

The defenders will then have to thwart the attackers from reaching the crystal by slaying them. Slain players from both sides will resurrect on their respective bases, and each death will make the resurrection timer longer.

The Battleground rewards its victors with gold, XP, random equipment, and scrap materials. Points will also be earned which is needed to raise ones Battleground rank. Each rank reached will reward Aspirant’s Keys and Glowing Shards, and at the end of the season, players will also be rewarded with Reforge Stones depending on their final rank.

The Assembly is where Shadows meet up with each other at the Court of Whispers to plan their assault towards the Immortals, but most importantly to share blessings and get rewards. Random participants of the Assembly will be assigned a certain Akeba’s Blessing which they can share to the other participants. After a few minutes, a new blessing will be assigned to another random batch of participants.

There are four Akeba’s Blessings to gain, each one provides some XP, gold, Aspirant’s Keys, as well as Marks.

The Shadow War is a sort of tournament between the Dark Clans of the Shadows to determine who will be the top 10 Dark Clans to face off against the Immortals in the Rite of Exile. Each match up will put the members of the competing clans in several challenges, and whoever gets the most points will move on to the next match.

Dark Clans who wish to join can register during Mondays and Tuesdays and preliminary battles will begin on Thursdays. The final battles are hosted on Saturdays. Winners will be rewarded with Shadow War spoils (XP, gold, random gear), Aspirant’s Keys, and even Legendary Crests. Clans who don’t win can try again once a spot in the Rite of Exile is open.

The Rite of Exile is where the top 10 Dark Clans send their best members to fight against the high-ranking members of the Immortals. The gameplay is basically the same as players have experienced in the Battleground, where the Shadows play as the attackers while the Immortals play as the defenders.

If the Shadows lose the Rite of Exile, they can challenge the Immortals once more on the next opportunity. While waiting for that, Shadows can work on unlocking more buffs for themselves by doing more quests to earn Marks. This cycle continues until a Rite of Exile is won and a Shadow gets to replace an Immortal.

Challenge of the Immortal

If the Shadows win the Rite of Exile, 30 members from the 10 Dark Clans will have to band up together and fight against an empowered Immortal in the Challenge of the Immortal. This is going to be a 30v1 fight, but the Immortal will have the power of the Eternal Crown which makes this seemingly one-sided matching fair.

Check out this video by Strange Religion showing parts of the journey Shadows must take in order to become an Immortal: