A guide about Thunder Eggs in Dinkum. 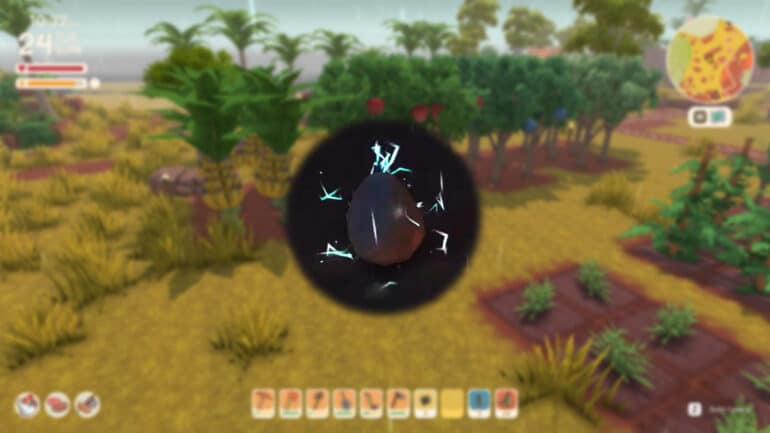 A Dinkum Thunder Egg is a rare type of item that only shows up after a massive lightning strike in the game. It’s quite odd to see a huge egg appear out of nowhere, let alone a huge egg that is sparking with electricity.

In this guide, we will be talking about the Thunder Egg, how to get one, and it is good for.

How to get a Thunder Egg in Dinkum

A Thunder Egg only appears when it there is a storm. Once a lightning strike happens, there is a huge chance that a Thunder Egg will appear out in the map. It is a huge egg that looks like the ones laid by a Mu, but with a stony texture, and sparks of electricity shoot out from it.

It is totally safe to handle a Thunder Egg with your bare hands and since it is considered as a huge resource material, it can only be carried on top of the player’s head and it cannot be stashed inside the inventory.

Uses of a Dinkum Thunder Egg

There are only a couple of things that you can do with a Thunder Egg in Dinkum, and hatching a thunder chick is not one of them (for now, we’re hoping). Despite that, obtaining one can be quite a treat, because not only is it a good display piece, it can also fetch you some fair amount of Dinks.

You can bring a Thunder Egg over to John and place it on the scale. Depending on how heavy the egg is, John will be willing to pay you more or less around 50,000 to 60,000 Dinks.

Similar to thunder eggs found in real life, cracking one of these eggs up will give you Opals which are shiny gemstones that can be sold for a high price. Each Thunder Egg can give you 4 Opals and each Opal can be sold for 15,000 Dinks, so make sure to weigh the egg first before cracking it open; sell the egg itself if John appraises the egg for more than 60,000 Dinks, otherwise crack the egg and sell the Opals instead.

Apparently, you can also drop the egg on water and it will also crack the egg, which will still give you the same amount of Opal yield.

If you are not in dire need of Dinks, it’s recommended to keep one Thunder Egg as a display piece in your house as sometimes, some of the residents may ask you to get a photo of a Thunder Egg as a task.

Check out this video by Make Way For Cat showing the spawning of a Thunder Egg: