A guide on how to brew using a Keg in Dinkum. 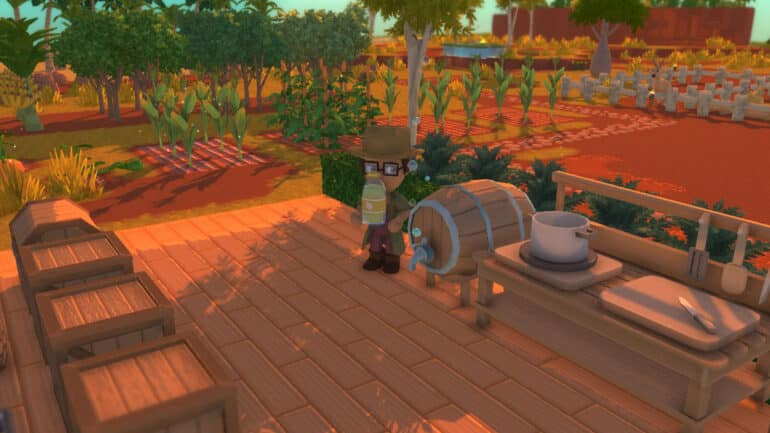 The Dinkum Keg is one of the processing items that is needed for brewing different kinds of drinks in the game. A couple of seemingly inedible items can be placed inside a Keg and after a few days of fermenting inside it, a drink will be available for consumption the provides different kinds of boosts depending on the ingredients used.

In this guide, we will talk about the Dinkum Keg, how brewing works, and what brewing recipes can be done with it.

How to unlock the Keg in Dinkum

First, you will have to get your Woodcutting level to level 10 in order to be able to upgrade your Logging License to level 2 from Fletch for 1,000 Permit Points. Once you have your license upgraded, you’ll then unlock the Keg blueprint.

How to craft a Keg in Dinkum

To craft a Keg, you’ll need:

Bring these items at the Crafting Table and you’ll be able to make a Keg. You can then place it down on any solid ground.

How to brew using a Keg in Dinkum

Because of the long time that it takes to make a brew, it is recommended to make a couple of Kegs depending on the need or on the consumption rate. Sadly, the brewing process is not affected by a Windmill.

There are only three brewing recipes in the current version of the game.

How to get Jelly

Jelly can be obtained by hunting down Jellyfishes in the sea. The best weapon to hunt jellyfishes is the Slingshot as it is a ranged weapon and you can stay on land without having to swim in the water; the aim is a bit inaccurate at times, but just bring enough stones with you for ammo. Once a jellyfish is hunted, it drops 1 Jelly.

Because the game is still on its Early Access phase, there is a huge possibility that we will be seeing a lot more brewing recipes added into the finished game. We would love to be able to create stuff like:

It would also be a nice addition if an upgraded version of the Keg will exist in the game, one that would let us create concoctions with multiple ingredients.

Check out this video by The Ginger Empire showing how to use the Keg: