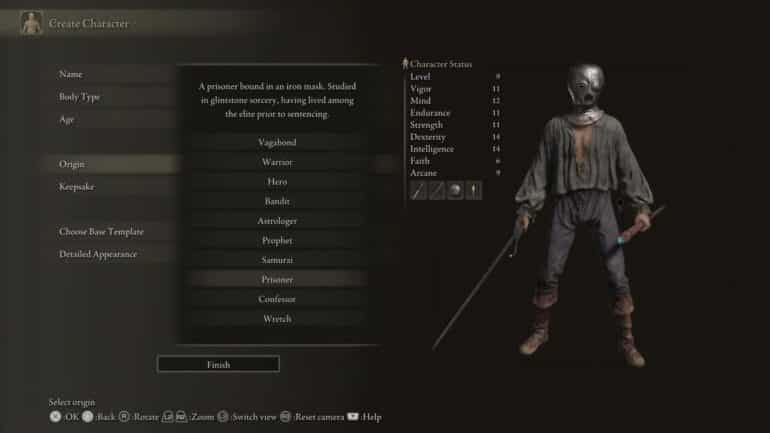 In Elden Ring, Character Creation and Customization is one big factor. When it comes to role-playing games like Elden Ring, you’re not only building up your character’s strengths and skills, you also want to make sure that they look good – or at least look like how you want them to look.

In this guide, we will look through Elden Ring’s Character Creation process to see what are the options that you can work on for your character.

The first selection that you have to go through is the Character Base Selection, also known as Class Selection or Origin Selection. There are 10 classes to choose from, all having different starting stats and levels.

It is worth mentioning that these classes will not restrict your progression to a specific class alone. That means you can start off as a Hero, but you can eventually build towards being an Astrologer, or even end up with a hybrid of the two.

Aside from the differences between the stats, each class also have different starting gear. Weapons and clothes have stat requirements rather than being class specific, so you can definitely equip all sorts of gear, provided that you meet its stat requirement.

After deciding on a class, you’ll then be asked to choose a body type: buff (Type A) or slender (Type B).

You can then give your character a name. The name should be 16 characters at max.

You can also select how young or how old your character will look like in general. This will only affect your character’s appearance and will have no bearing on its ability.

This is similar to the previous character base selection where you can select your character’s Origin. In this section however, you will be able to see the differences in stats among the Origins on the right side of the screen, so you can better decide which class you want to start with.

There are eight different attributes that will affect how your character will perform, what kinds of skills and spells they can use, which weapons they can equip, and so on. Each starting class have specific amounts of points allocated between their attributes. As you level up, you’ll get more points which you can then allocate the the attribute that you want.

Keepsakes in Elden Ring are bonus items that can give you an advantage early on in the game. Each keepsake have different effects and some of them are consumables. You can also opt to not select any keepsake for your character.

The customization is very in-depth and there are a lot of sliders to play with, so you can definitely try and go for that look that you want. Once you are satisfied with how your character looks like, you can save its appearance and move on to start your journey into the Lands Between.

Check out this video by Arekkz Gaming that showcases Elden Ring’s Character Creation: