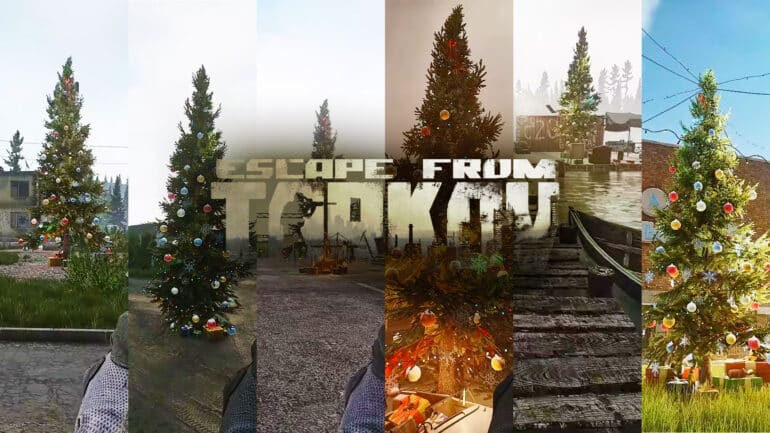 The Christmas Tree Quest in Escape from Tarkov is from a patch that includes a Christmas event. Aside from adding Santa Claus who you can get presents from into the game, there’s also a new quest called “To The Tree!” that requires you to find and visit the Christmas trees that were placed in each map (except for the Factory and the Lab).

Under these Christmas trees are a bunch of loot that you can grab, but if you’re playing in a server, you have to act fast or else the other players won’t leave you anything aside from a few bullets shot towards you, I guess.

There are also some Christmas ornaments that you may spot lying around these trees. These ornaments are crafting items needed to craft a Christmas tree inside your hideout and a bunch of other gear and items as well. We also have a guide about the Christmas tree crafting, so stick around and read through the guide if you’d like to know more.

How to get Christmas Tree Quest in Escape from Tarkov?

To unlock the Christmas Tree Quest in Escape from Tarkov, players must accept the two new quests from Mechanic (To the Tree) and Ragman (Party Preparations), which reward you with Christmas ornaments and the two new in-game armored rigs, respectively, before going in search of Santa.

The Christmas tree for Customs is on the north part of the map, right in the middle of the dorms. Make sure to check on and around the tree as well as the gift boxes scattered in the area for different kinds of loot and ornaments.

The tree at the Interchange is situated at the west part of the map, at the scav camp across the other side of the road from the ULTRA mall.

The tree at the Lighthouse is situated at the south part of the map, near the hideout under the landing stage scav extraction site.

The tree at the Reserve is situated at the southwest part of the map, in the middle of the dirt paths near the E2 bunkers.

The tree at the Shoreline is in the middle of the resort compound, just in front of the admin building.

The tree at the Woods is at a floating platform in the lake. It’s quite near the shore and there’s a bridge connecting to it, so no need to swim and get wet.

To The Tree! Quest Rewards

As mentioned earlier and as you may have already seen while looking for these Christmas trees, there are also Christmas ornaments that you can pick up while going around the different maps.

These Christmas ornaments are considered as valuables, so you can expect to see them in places where you expect to find such other valuables like safes, scav backpacks, and of course around the Christmas trees.

Once you’ve collected at least five (5) violet, ten (10) red, and ten (10) white ornaments plus 10,000 Roubles, you can then build a Christmas tree inside your hideout instantly.

This tree will also serve as a workbench where you can craft more items just by using the necessary types and amounts of ornaments as indicated on the items’ crafting recipe.

These recipes will take time to complete, so plan ahead and make a list of all the ornaments that you have to collect based on the items that you fancy crafting.

Where is Santa Claus in Escape From Tarkov?

A peaceful Santa Claus bot that distributes presents can spawn anywhere. To commemorate the holiday season, Battlestate Games has also added Santa Claus to Escape From Tarkov on all maps except one, the Laboratory.

Unless you injure him, he won’t get in the way of the fight, but he will attack if you do. The player will receive a significant reputation penalty with Fence for killing Santa Claus with either PMC or Scav.

He will give you in-game items if he thinks you’re nice to him. If you kill him, your Fence reputation will be tarnished, according to multiple sources it appears to be approximately -1.5 reputation for killing Santa Claus.

How long are the Christmas quests going to be active for in Escape from Tarkov?

No one knows exactly how long the Christmas quests will be active in Escape from Tarkov as it was not specified by the devs when it was announced last December 25.

We hope we made your Christmas event easier with our guides. Check out our Escape from Tarkov guides:

Get Escape from Tarkov here.

Also check out this awesome video by BakeeZy on All Christmas Tree Locations in Escape from Tarkov: