Get to know more about the conflict between Earth and Titan 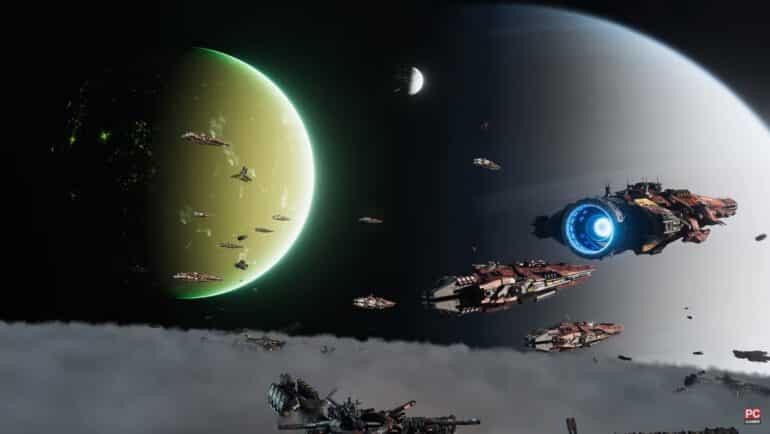 Publisher Hooded Horse debuted a new trailer for their upcoming sci-fi RTS, Falling Frontier, during the PC Gaming Show, featuring the first look at Earth as a Martian fleet in orbit comes under attack by Titan forces.

The trailer announces the second act of the campaign, as humanity flees the destruction of Earth and the devastation of our Solar System following a war between Titan and Mars that takes place during Falling Frontier’s first act. The game’s second act takes place in procedurally generated alien star systems, creating a unique experience for each player.

Falling Frontier is a revolutionary sci-fi RTS where ship design, recon, and logistics are critical elements. Your expeditionary force has just completed the construction of its first spaceport in orbit of a new world, but you are not alone. Rivals from the old colonial wars between Earth, Titan, Venus, and other lineages that divide humankind have also arrived in the same star system.

Battles in Falling Frontier combine intuitive control with deep mechanics. Shots can strike unintended targets after missing or ricocheting off hulls and each ship has subsystems that can be damaged or destroyed upon impact. Smaller, more maneuverable craft can defeat much larger vessels through ambush or tactical superiority.

Wars are won or lost through logistics. A weaker opponent can engage in guerilla warfare, raiding supplies depots and refineries, blockading colonies, and otherwise attacking each point in the enemy supply chain. Likewise, a stronger force cannot simply combine their ships in a single massive and unstoppable fleet and must instead strategically distribute smaller defense flotillas throughout their territory.

Use probes, scout ships, and recon stations to explore and monitor the vast emptiness between planets. Recons stations scan defined angles with either passive scans that grant limited information or active scans that give away their position. Similarly, the enemy will continuously search for your forces, and you may hide your ships behind moons or mask their heat signatures near gas giants.

Falling Frontier incorporates over 20 different ship types, including frigates, destroyers, cruisers, and battlecruisers, alongside an array of civilian ships. You may create your own designs and choose weapons, utility modules, and other components to best serve your strategic needs.

Your command crews are not abstract and impersonal entities, but rather named individuals with ranks, portraits, and identities. Each officer has their own traits and abilities, making personnel choice a critical factor in efficient flotilla composition. Enemy officers not killed in action can be captured and interrogated, or left in their escaped pods as bait in order to ambush any rescue ships.

Falling Frontier supports modding through an in-game scenario editor that allows players to design and share their own star systems, missions, and storyline campaigns.

Falling Frontier will be released later this year and can be wishlished on PC (via Steam) right now.

For more on Falling Frontier, check out: