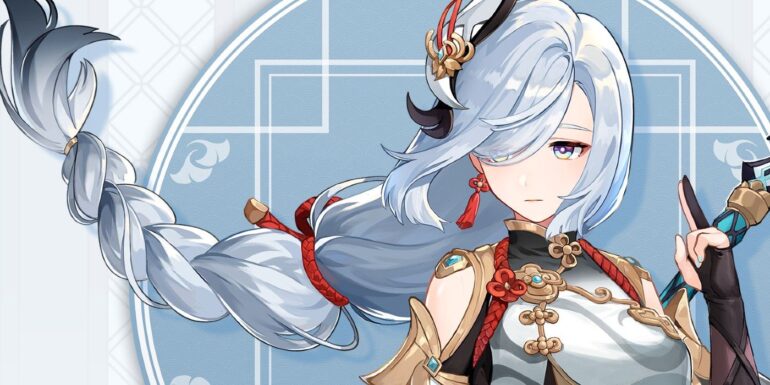 Genshin Impact is already hosts a good number of colorful characters especially with Gorou and Itto’s banners scheduled for released this December 14, 2021. But miHoYo has been busy keeping fans excited. A new playable character Shenhe has been revealed by the developers to come out soon. Here’s all we know about her.

Shenhe is an exorcist working for the Cloud Retainer in the Liyue region. Not much has been revealed about this mysterious character, but her title, the “Lonesome Transcendence,” implies that she isn’t much for socializing. This is especially reflected on her icy appearance and snow white hair.

The description on Genshin Impact’s official Twitter page implies that Shenhe both has admiration and annoyance for her teacher, the Cloud Retainer, describing him as a “knowledgeable, but chatty” master.

Shenhe doesn’t have a locked-in release date. She was originally data-mined this November but players haven’t gotten a confirmation of her existence until miHoYo’s announcement.

She is speculated for release after the contents of 2.3 updates have worn out. We suspect that Shenhe’s banner might be available on the 2.4 version update on January 4, 2022.

Shenhe possesses a cryo vision and wields a spear, giving her a good range for a melee combatant. A student of the Cloud Retainer, a demi-god residing in Liyue, Shenhe herself is completely human. Though her exclusive constitution and combat talent have earned her an otherworldly reputation.

Not much is known about Shenhe’s abilities and constitution. We suspect that miHoYo will reveal more information about Shenhe in the middle of December once Gorou and Itto’s Banners already have rolled out.

Shenhe’s banner is slated for release alongside Yun Jin. Both characters residing in Liyue respectively, shifting the 2.3 update focus from the Inazuma region.

A lot of players are looking forward to Shenhe’s release. In Twitter, fans have already started creating beautiful fan arts of her:

We will update this guide as soon as new information or leaks are revealed about Shenhe!