How to Complete Gunsmith Part 4 – Escape from Tarkov Guide

Learn how to complete the Gunsmith part 4 quest. 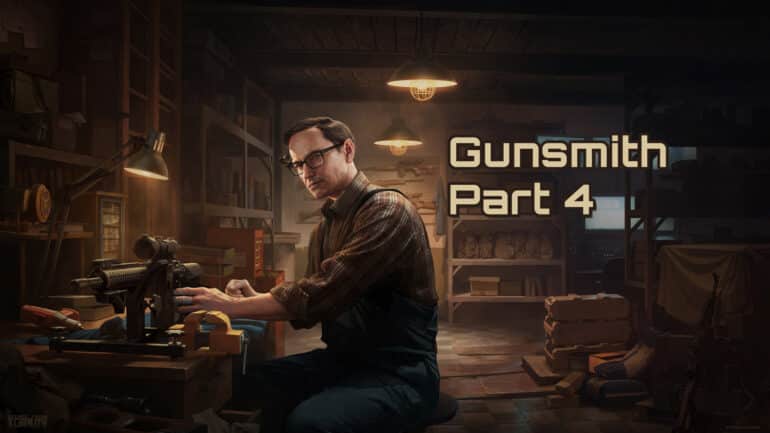 Gunsmith Part 4 is another quest that is given by the Mechanic that requires players to modify a gun to certain specifications. The modification itself can be done in lots of different ways, and in this guide, we will show one of the recommended and easiest ways to complete this task.

Reaching the target specifications can be done in different ways. In building this build, it’s good to start with the specs that are more part specific such as the sighting range, mag capacity, and the silencer requirement.

The ergonomics, recoil, and weight can be worked around through several different attachments, while making sure that the parts are in good condition will take care of the durability requirement.

You can barter for the M4A1 SAI variant from the Mechanic (LL2) to get as close to the specs, then just modify as needed.

Most of the attachments can be bartered from the NPCs, however some of them is locked behind a loyalty level. If you find that you’re lacking the required loyalty levels, you can check out the flea market if you have enough Roubles to spare, or go on raids and make sure to loot as much as possible.

Make sure to work with the attachments that satisfy the requirements right away, then your way through the more negotiable requirements like the ergonomics and the weight. Also, take note of the compatibilities.

You’re going to turn in the gun to the Mechanic, so make sure to remove any bullets or attachments that don’t contribute to the requirements, especially if you bought a pre-built variant.

If you likes this guide, check out our other Escape from Tarkov articles:

Check out this video by Airwingmarine for more options on how to build the gun for this quest: