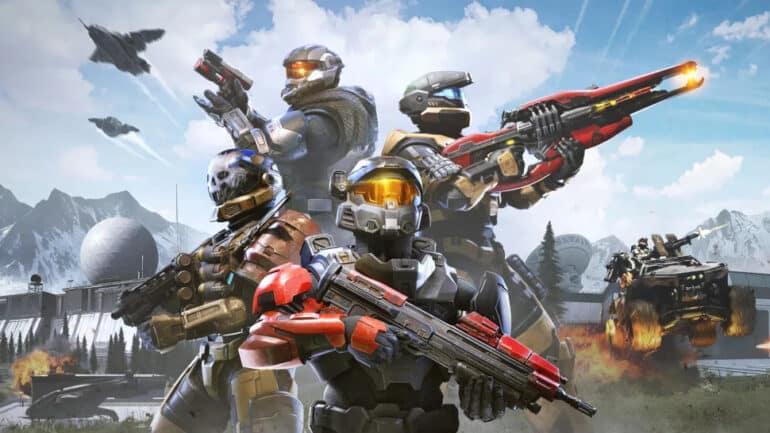 You wouldn’t know what freedom feels like until you’ve killed 10 enemies consecutively without dying using an Energy Sword. Halo Infinite has quite a few standout weapons among its arsenal and some of them are definitely better than others.

To know which weapons are the best in Halo Infinite Multiplayer, we’ve put together this tier list to see which ones are the best weapons to use.

There are a total of 22 weapons in Halo Infinite. Unlike the path many FPS games have taken, most Halo game modes doesn’t have you start out with your own loadout. Modes like Big Team Battles have you look for weapons that spawn around the map. You’re out of luck if someone else gets to them first. So you’re going to need to know what weapons are the best.

Of course your mileage may vary on what weapon you consider is the best. But we compiled a tier list based on how reliable a weapon is depending on the circumstance.

Here’s what each tier level means.

Check out our personal picks for weapons and ranking them from best to worst in Halo Infinite Multiplayer.

Weapons that are a must have, the best of the best.

You ever see someone coming at you with a Gravity Hammer and you know your time is up? A single good hit from this bad boy is good enough to take you and anyone close to you. Even vehicles can get destroyed by this thing.

If you see an enemy Spartan close to you wielding the Gravity Hammer, it may already be too late. Killing foes with this thing feels like swatting flies.

The Halo Energy Sword isn’t just iconic for its sleek, futuristic, and alien design. This weapon kills and kills often at the hands of a skilled player. You don’t know what freedom feels like until you killed 10 enemy Spartans consecutively without dying once.

Pair the Energy Sword with the Grappling ability from Halo Infinite and you’re going to score kills beyond your wildest imagination.

Nothing says “love” quite like an M41 SPNKR Rocket Launcher. Although slow, its rockets spread wide and spread hard, killing whoever was unlucky enough to be just standing there.

Of course, with such a powerful weapon 343 had to balance it by keeping its ammunition low. Else this would’ve taken the top spot.

The classic Halo S7 Sniper Rifle makes a return in Halo Infinite. And it’s just as powerful as you remember. It’s got a scary good rate of fire despite being a sniper and can one hit kill enemies at a far distance.

This burst-assault rifle is a great weapon to compete with even in long distances. The BR75 is a pretty reliable weapon in mid-to-long ranged fights being able to do considerable damage against enemy Spartans.

The Heatwave is basically the better shotgun in Halo Infinite. It doesn’t have a rate-of-fire as good as the Bulldog’s but its damage output and ricocheting rounds can stop any enemy on their tracks.

The Hydra is a decent rocket launcher with lock-on capabilities. It will mow down any vehicles and the enemy Spartans driving them. Not only will it be able to track vehicles, but enemy players as well.

The Cindershot can deal good damage at a wide area. Its grenades will bounce off surfaces before they split into smaller explosive projectiles. This is great for hitting enemies behind cover, but don’t rely on the Cindershot for precision gun fights.

The Shock Rifle is a powerful long ranged weapon not to be underestimated. It can potentially one-shot kill enemies at a good range before they knew what even hit them. Even better, is that the potential damage you deal to a person can also spread between a group. But you’d best time your aim right as missing shots can be punishing.

The VK47 Commando has a slower rate of fire compared to the other assault rifles. But what’s great about the VK47 is its ability to compete in long ranged gun fights and it certainly isn’t a slouch in close quarters making it an excellent weapon no matter the distance.

The default weapon your Spartan starts with is one of the most reliable go-to guns in the game. Although its damage output at long ranges is abysmal it maintains its realizability on close-to-mid ranged gun fights.

The Mangler is best used by those with good aim. It can tough to master with its recoil and the fact that you have to carefully time your shots to make them count, but once you get used to it the Mangler kill enemies in 3 good hits.

The blade attached to the bottom of the Mangler also gives it increased melee damage.

The Sentinel Beam doesn’t leave any bodies. Watch the remains of your foes disappear into thin air as you keep blasting them with nonstop beams that’ll stop even vehicles. This weapon is a great pick for those who can accurately track their enemies.

The CQS48 Bulldog is menacing at close quarters. But it can be a bit of a challenge as most enemy players turn almost any close combat encounter into a melee fight. Your best bet to use the Bulldog is to ensure that enemies don’t get too close to you.

The Stalker is an alien sniper rifle that can hit fast shots at the expense of power. It’s inferior to the S7 but can still deal great damage at long ranges. Just be prepared to put in multiple shots do down your enemies.

Weapons that’ll do if no alternatives are available.

The default sidearm you start with isn’t a bad gun. But it isn’t exactly reliable. You’ll mostly switch to the Sidekick when you have to finish a gunfight instead of reloading.

This menacing looking grenade launcher can coat a large area like you launched a Molotov. The Ravager is great for denying entry to enemy players but it won’t really secure any kills.

The Disruptor gun may effectively stop enemy shields from regenerating for a short time, but it deals incredibly poor damage. You aren’t likely to kill enemies with it despite the fact that it deals damage over time. This gun is only a bit more effective against vehicles as it functions as an EMP top stop them in their tracks.

The Skewer is best used as an anti-vehicle weapon when there aren’t any other anti-vehicle weapons around. You’ll find it in your best interest to discard it for something else after its intended use. While you can kill enemy Spartans in one shot, it takes incredible accuracy to hit your mark and can be costly to miss as it needs to reload every after a single shot.

The Needler tracks its targets making it a semi-okay gun in close quarters combat. But even after you inject the enemy Spartan with every spike in its chamber, they still won’t die. The Needler isn’t a reliable weapon to fallback on unless you need to reload your other weapon.

The Plasma Pistol is a poor man’s weapon. You can hold the fire button to charge it but the slow speed makes it easy to dodge. It’s default fire also barely does any damage.

The Pulse Carbine is a joke. It’s an alien assault rifle that’s fires slow and kills slow. You’re better off never picking this weapon up ever.

There are a number of powerful weapons scattered across the map, and you must make a choice as to which one to track down and use.

This complete tier list ranks every single weapon in Halo Infinite, so there you have it. In every future update, we’ll see a variety of changes in the game’s balancing. We may even see a few new weapons in the future as well and we’ll be sure to constantly update this guide for your reference.

Hopefully this long list helps you out on choosing the best weapons to bring in Halo Infinite Multiplayer.