An 80's Cyberpunk themed event coming to you. 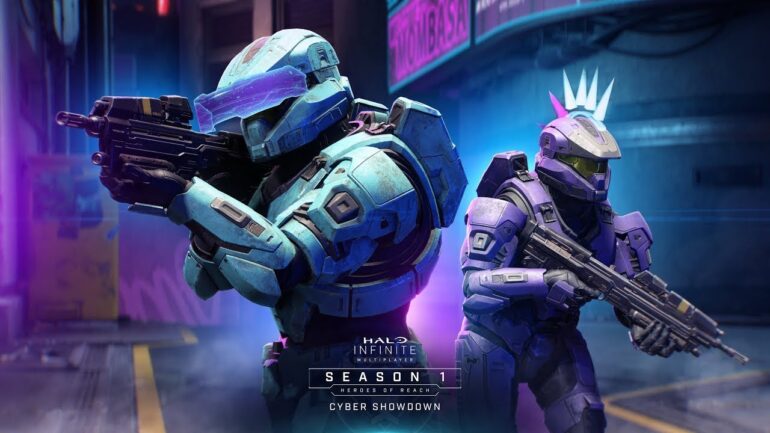 Halo Infinite is bringing you back to the classic sci-fi 80’s that dominated that decade. The retro-themed event called Cyber Showdown is set to give players Halo Infinite’s Multiplayer its third event since its launch on November 2021.

Learn all about the details of when the Halo Infinite Cyber Showdown event will start, event rewards, and other new game modes.

Halo Infinite Cyber Showdown will start on Tuesday, January 18, 2022 which isn’t too long from now and may have already begun by the time you are reading this. While there aren’t any solid indications of what time the event will start, going from the previous updates it will most likely be sometime around 1 PM EST as both the Fractures Tenrai and Winter Contingency began around that time.

We still aren’t sure when the Cyber Showdown event will end but we can say from leaked sources that the event will most likely last until Monday, January 31st.

Like Fractures Tenrai, Cyber Showdown will be coming with its own new game modes that revolve around the event. 343 has been keeping a tight lid on leaking what new game modes are coming up exactly so we aren’t too sure.

We might be receiving more tactical slayer game modes in comparison to previous events.

Much like the previous events, Cyber Showdown will reward players who participate in its event challenges. 343 has noted that feedback from players who feel that the progression system for those seeking to earn cosmetic rewards was taking too long and it’s a sentiment that they have acknowledged.

Personally, I can agree to this since earning my Yoroi Samurai Armor took me two days just to get to Ranks 4. Hopefully, Cyber Showdown will make the progress much faster than before as to not frustrate players.

Cyber Showdown will have 10 Ranks, each rank having its own reward for your to redeem. You’ll have your chance to earn limited time cosmetics by participating in King of the Hill, Slayer, Capture The Flag, and Attrition.

You’ll notice this time around that there aren’t any XP boosters or mission modifiers on the list. The fact that each rank introduces an unlockable free cosmetic is great move forward.