Elden Ring – How to Beat Godrick the Grafted Boss Fight

A guide on how to defeat Godrick the Grafted in Elden Ring. 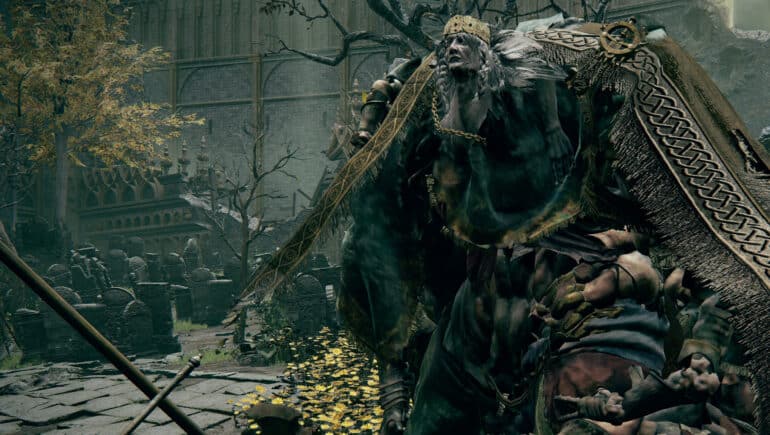 Godrick the Grafted is the first main boss or Demigod that you will have to defeat in Elden Ring. Though he’s supposed to be the “weakest” main boss, he can still be relentless and unforgiving to the unprepared.

In this guide, we’ll take a look into the demigods and give you some tips and tricks on how to defeat them.

Who is Godrick the Grafted in Elden Ring?

Godrick the Grafted is the first demigod that you’ll encounter and he resides inside the Stormveil Castle. He is not a full-blooded demigod, so he’s a demi-demigod, and because of this, he had to resort to the forbidden art of grafting to compensate. Hence why he has dozens of limbs attached to him, and even at one point, he will graft a full dragon’s head as one of his arms.

You will be fighting Godrick the Grafted within the castle’s courtyard. It is an arena that’s big enough to run away and not get hit by his ranged attacks, but stay away from the side edges as these are sheer cliffs. It also has uneven terrain, ledges, trees, and other obstacles that can be used to block some attacks or impede his movement.

Using the ledges to get an elevation advantage is the key strategy for melee attackers, while ranged attackers could use the open area to kite Godrick and attack him from a safe distance. Ledges can also be used to cut his line of sight.

Though useful for slowing Godrick down, the obstacles littered within the arena can become a disadvantage for you. They don’t provide good cover as Godrick can just destroy them with his attacks, and these obstacles can also impede your movement. It’s best to stay in the middle of the courtyard or on clear ledges to avoid getting caught by these obstacles and become vulnerable to attacks.

Godrick uses both melee and ranged attacks in the entire fight. Though he has wind ups that can be used to anticipate his next attack, their timing is variable, making evasion a bit more challenging.

Godrick uses his right hand to wield his axe and deal massive swings that have a wide reach. Timing your dodge rolls is very important to avoid getting hit and move to a good spot to follow up with an attack right away. The windows between his attacks may vary, but they’re long enough to sneak in some hits.

Godrick has an attack in which he winds up by moving his right arm with his axe over his left shoulder for a few seconds before swinging it forward from left to right. This attack is quite easy to dodge as long as you’re on your feet, but be careful of the follow up attack. As he swings his axe, he will also swing his left arm as a follow-through.

Backing away for some distance should clear you from this attack’s hit range. In case you’re caught within its hit range, dodging counter-clockwise at the right time should allow you to avoid the swings. You may sneak in a hit to the side after this, but Godrick can follow it up with a swing from his left hand, so be careful.

Another major attack is when he raises his axe upwards and swirls it in the air, summoning a whirlwind around him that deals damage. After which, he will smash the ground and roll forward in a half circle, followed by a high jump and finishing it with a massive axe swing as he crashes down.

Godrick will be aiming for the spot where you are at by the time that he jumps, so it’s best to clear away from his rolling path to avoid getting trampled, and then dodge towards where he came from just as he hits the apex of his jump. This is a big attack, which leaves him vulnerable for not more than 2 seconds, but it’s enough to dish out a couple of hits during this window.

After bringing down Godrick’s health to about around 60%, he will raise his axe upwards, but this time he has his left arm on the ground and he will scream as he does this. Depending on what you’re doing at this moment, you may still land a couple of hits during this period, especially if you are in a middle of a combo.

Godrick will then swing down the axe into his left arm, which will then be followed by a cutscene. He will then thrust his now amputated left arm into the neck of the dragon corpse, rip its head off, and use it as a flamethrower. He will still be doing some of his attacks from the first phase, covering both close range and far range.

One of the first attacks will be a swinging flame thrower that will go from his right towards the left. The reach of the flames is quite far and the swing is also wide. The best way to avoid getting hit is to dodge roll clockwise just as the flames are about to hit you.

If you are close enough to Godrick, he may use his dragon arm to grab you, pin you to the ground, and roast you with flames for a few seconds. The tell for this attack is quite quick, with just the dragon arm rearing backwards while in a low position before it thrusts towards you and grabs you.

For this, it is best to avoid being near Godrick’s left side if you are a melee attacker. By constantly repositioning in a clockwise path, you’ll have a better chance to avoid or even prevent Godrick from pulling off this attack. For ranged attackers, stay a bit farther away as the dragon arm has quite a long reach and might still be able to grab you if you’re not far enough.

Another attack is the downwards flamethrower where the dragon arm rears backwards in a high position while in flames, before spitting out flames in front of Godrick. He can still move while doing this attack, but in a slow manner and easily avoidable.

As the head starts to wind up, dodge roll towards Godrick to reposition yourself behind him. From here, you can swing away as a melee attacker, or do your heavy or charging attacks as a ranged attacker as this attack leaves Godrick’s back open for a couple of seconds.

Godrick uses his dragon arm to gather rocks from the ground, and then spits them out as fireballs in an arc towards your general area.

The attack will be sending a rain of fireballs towards you, but it is also easily avoidable as long as you keep moving while he still has his dragon arm towards the ground. As a melee attacker, you may also use this moment to close in the gap and land some hits.

One attack that does not involve his dragon arm is his ground shockwave attack. He will pound his axe to the ground thrice, with each pound stronger and sending out more rays of shockwaves than the last.

Simply stay away from Godrick’s close range as soon as you see him raise his right hand with the axe’s head pointed downwards.

How to Beat Godrick the Grafted Boss Fight

Here are additional tips on how you can beat Godrick the Grafted in Elden Ring:

Upon defeating Godrick, you will be rewarded with the following:

Check out this video by I Lap The Flash making quick work of Godrick the Grafted: