A guide on how to defeat Kleavor, The Lord of the Woods. 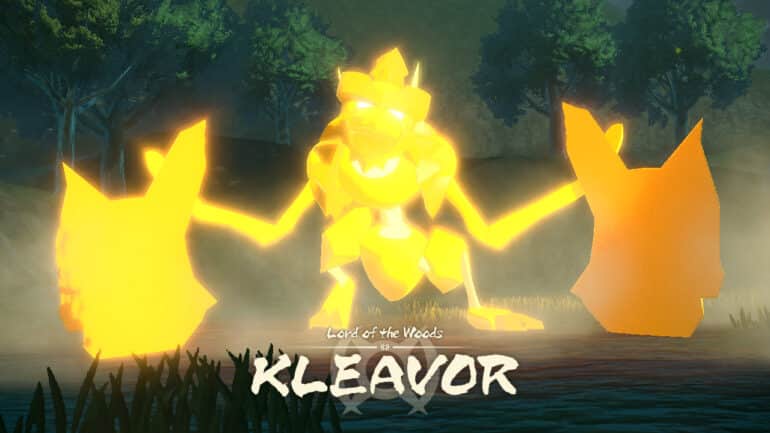 Kleavor is one of the Hisuian nobles that you have to fight in order to quell its frenzy. The fight is not just a regular Pokémon fight as it now requires you to go against Kleavor in real time. In this guide, we will look into Kleavor’s attacks and moves in order to overcome this challenge easily.

This follows the incident where a very strong bolt of lightning struck the area of the Grandtree Arena, the home of Kleavor. Upon investigation, it was known through Lian, Kleavor’s warden, that the lightning struck Kleavor which made it go on a frenzy.

How to Beat Kleavor Boss Fight

In order to defeat and save Kleavor from its frenzy, calming balms are made from Kleavor’s favorite food. A lot of these balms will have to be thrown directly at Kleavor for them to work, which is easier said than done. Kleavor will be hostile to anyone who sets foot in the arena and will dish out his moves one after the other.

Kleavor’s Attacks and How to Avoid Them

Kleavor will raise its arms to the side to prepare for the attack. It will then run towards the direction where the player was last at upon triggering the attack. While running, it will swing its axe-like arms wildly.

How to avoid: During this attack, Kleavor is prone to get stunned if it ends up charging towards a hard object, such as the trunk of the tree, or the sides of the arena. Try to position yourself behind the tree when it charges, or time your dodge to the side perpendicular to its charge path if you have the arena walls behind you. You may also dodge towards Kleavor at the right moment because dodging will make you invulnerable for the duration of the dodge, basically getting i-frames.

Once he’s stunned, you can then proceed to send your Pokémon to fight Kleavor, or continue to thrown balms at it. Remember that Kleavor goes back to full health every time it enters a battle.

Kleavor will raise its arms upwards to prepare for the attack. It then jumps, does a flip, and smashes the ground with its claws to unleash rock pillars from the ground that approach towards the player’s position.

The direction of where the pillars will come out is in a straight line, however it does not follow where Kleavor is facing. The direction is determined by the player’s position the moment the claws hit the ground.

How to avoid: Time your dodge along with the smashing of Kleavor’s claws to the ground. A bit too early and you’ll still end up getting hit where you land, and dodge too late and you’ll get hit, too. The rocks move relatively fast, so make sure to dodge perpendicularly away from its path, or take advantage of the i-frames.

You may also use the tree as protection, though don’t position yourself directly opposite to or far away from where Kleavor is on the other side, so that you can still easily see what its next move is going to be, and so that you can coax it to dash to you and bump its head once more.

Kleavor will raise its arms to the side, similar to preparing for a Charging Slash. This time, air will start whirling around it as it charges for the attack. It will then spin around in place with its claws extended, dealing damage to whoever is caught in its area.

How to avoid: As soon as the vortex of air appears around it, move out of its area of effect. The area is relatively small so a dodge or two away from Kleavor will do.

Kleavor Weaknesses and How to Counter

Kleavor is a Bug/Rock Pokémon, but despite that, it’s still weak to Rock type attacks, thanks to its Bug typing. You may also use Water or Steel type attacks, though Steel Pokémon usually don’t show up in this early part of the game. It’s also just at level 18, so it doesn’t hit that hard.

Psyduck and Bibarel are both water-types that can be found at Grandtree Arena. Geodude can also be found in the Obsidian Fieldlands for a rock type Pokémon. Kleavor takes double damage from moves of the rock, steel, and water types.

If Kleavor is chopping your Pokémon to pieces and you don’t have any counters, you can just keep evading and throwing balms instead.

If you get too close to Kleavor, it will unleash an area-of-effect strike, so keep your distance. Dodging and rolling away from it is the best technique to avoid being hit by it.

You can also just avoid fighting Kleavor every time it gets stunned and just continue chucking balms at it. Its frenzy bar will still go down.

Once Kleavor’s frenzy has been quelled, it will come back to its senses and give you the Insect Plate, an item used by Arceus to gain the power of the Bug type.

Can this Kleavor be captured?

No, this Kleavor cannot be captured since it is a noble. There are Scythers and an Alpha Scyther spawning just at the southwest section of The Heartwood area that you can capture and evolve to a Kleavor. Simply use a Black Augurite on a Scyther to prompt an evolution.

Check out this video by Austin John Plays showing that it is possible to defeat Kleavor just by yeeting balms at it: