How to Get Gnat Fuzz in Grounded 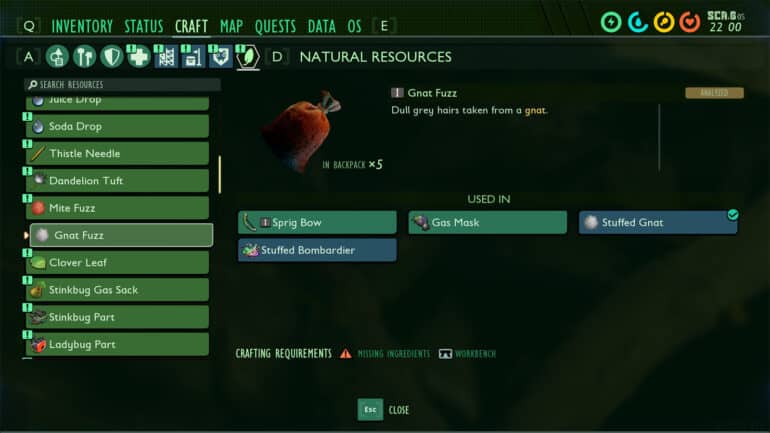 Gnat Fuzz is one material in Grounded that is essential to get started in surviving the harsh environment of the yard. Not only is it needed to craft the basic bow, it is also a component of a mask that allows adventuring in the toxic haze. It’s important that starting players know how to get their hands on a couple of them on the get go.

In this guide, we will talk about how to get Gnat Fuzz in Grounded.

How to find and get Gnat Fuzz in Grounded

As the name implies, Gnat Fuzz is obtained from hunting down Gnats which are small fly-like creatures that buzz around and are usually found in the Flooded Zones. Gnat Fuzz can also be dropped by the other gnat variants such as the Infected Gnat or the Meaty Gnat, and they can also be looted from breaking web sacs. However, these other options require venturing on to lands that are dangerous enough for those who are not well equipped.

When hunted down, gnats will usually drop around 1-3 Gnat Fuzzes. Attacking gnats can be quite challenging, especially if they are hovering just high enough from your reach. If you still have yet to get your first fuzz for your Sprig Bow, try picking up grass planks or weed stems and huck them at the gnats.

A great way to farm gnats is by the garden lights at night. When it gets dark and the garden lights go off, gnats will head over to the lights and swarm them. There are several garden lights within the yard, and you can climb some of them via the sticks that act as bridges.

It’s good to note that gnats usually just hover around the light and they don’t touch it, and since the walkway around the lights are narrow, you can either wait for one to wander just close enough so that their body will land on the walkway, or just kill them, let their bodies fall on the ground, and then gather them all later on. It is recommended to bring a torch with you so that you can see well while looting the gnat corpses and to lower the chances of getting ambushed by wolf spiders or orb weavers.

Spoiled Meat Slurries can also be used to attract gnats and make them come closer within hitting range.

Gnat Fuzz is used for a couple of things, two of which are the Sprig Bow which is the most basic bow, and the Gas Mask. These two items are a must get when starting out a new game in Grounded as the bow will allow you to hunt insects from a safe distance, while the mask allows you to venture into the Haze and become immune from a stinkbug’s gas. For crafting these two, you will only need 8 Gnat Fuzzes, but it’s better to have more in stock to repair the mask’s durability.

Gnat Fuzz is also used as stuffing for decors such as a Stuffed Bombardier or a Stuffed Gnat.

If you like this guide, be sure to check out our other Grounded articles:

Check out this video by WoW Quests showing the best way to farm gnat fuzz: