An overview of the XP and score system in Sifu. 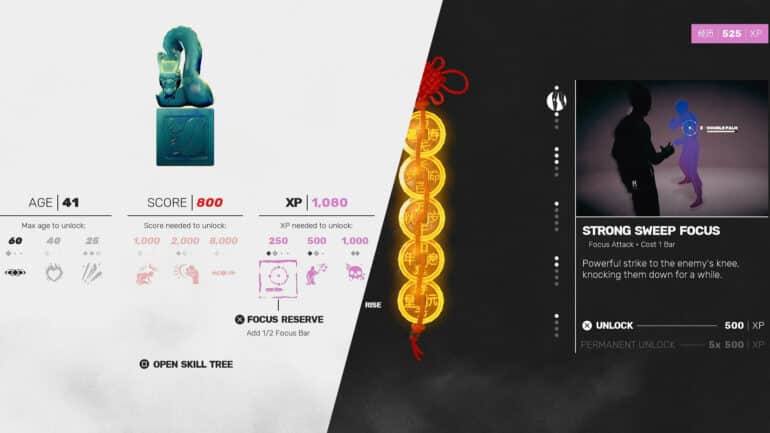 Sifu is a fast-paced martial arts action game that puts a twist on a player’s story progression by means of gaining and spending XP and score, and through the protagonist’s eventual, yet necessary death. Players will find themselves learning and mastering different skills through the hard way, but the protagonist grows stronger in each new iteration of his or her life.

In this guide, we will look into how to efficiently gain XP to use on your skills and rack up points to obtain bonuses that will help you progress through the story and help your protagonist exact his revenge.

You follow the story of a young protagonist out to seek revenge for the death of your father. Several people, some were acquaintances, raided your house and murdered your father, as well as you. Little did they know that you held on to a magical talisman that grants the holder another life.

The catch is that you get older every time you die, and every subsequent death adds that many years to your age. Every run, you start off as a 20-year old, but every ten years that you age, the talisman weakens. You do get stronger with your attacks, but the amount of health that you have declines.

The talisman can keep reviving you in a run up until you reach the age of 70, after which your next death will end your current level and you’ll have to go through the level again or you can redo the entire run from the first level.

But your death is not all for naught. As you die, you get access to your skill tree where you can learn new skills to use once you resurrect, giving you more ways to overcome the enemies. Unlocking these skills will require you to spend your experience points or XP.

How to Gain and Use XP in Sifu

You get a certain amount of XP by beating up the bad guys. The more bad guys you defeat, the more XP you get. The amount of XP that you get differs depending on how strong the enemy is, from grunts rewarding the lowest XP, to bosses that award the most amount of XP.

You can then spend your earned XP on unlocking new skills, as well as getting temporary bonuses from Jade Dragons. There are three ways on how to spend your XP on skills:

To clarify the difference, a level only pertains to the part of the game that happens within a specific area like The Squats or The Club, while a run consists of several levels starting from The Squats onwards.

When you die from a level, you’ll lose all of the XP that you’ve earned from that level, including your score, bonuses, and soft unlocked skills. On the other hand, you get to keep the skills that you have unlocked permanently.

In Sifu, each skill requires a different amount of XP, ranging between 500XP to 1,500XP. There are two ways of unlocking skills: soft unlock and permanent unlock. We have our Sifu – All Skills and How to Unlock Each guide that explains how the skill unlocking system works in further detail.

To summarize it: skills that are only soft unlocked are temporary and have to be unlocked again upon restarting a level, while permanently unlocked skills can be used in every run moving forward.

Using XP for Bonuses in Sifu

Jade Dragons offer bonuses that have different kinds of requirements: age, score, and XP. You can spend your XP to get these three bonuses for your current level:

Jade Dragon bonuses are only temporary and will reset when you restart a level. However, you can decide to keep the run and just play the level again, or restart the entire run. Restarting a level will let you keep all the bonuses that you got from the previous levels, while restarting a run resets all your bonuses back to zero.

How to Achieve High Scores in Sifu

The Level Score or scoring system in Sifu is an indicator of how good you are when doing and keeping combos. Its multiplier is based on your hit streak rather than your kill streak and the accumulated score is mainly used for getting bonuses from Jade Dragons.

Players can raise the score multiplier by performing connecting hits on the enemies and it can go up until x5. The score is only added to the total when the enemy is killed and the amount added is based on the enemy’s base score reward multiplied by the multiplier at the time of their death.

For a rough example, when fighting against 2 enemies simultaneously:

This can be done to optimize your score whenever you have to start a streak, though you won’t have to worry about it if you can consistently maintain your streak. The multiplier goes down by 2 whenever you get hit by an enemy.

Score can also be used to unlock bonuses in Jade Dragons. Unlike XP, your score won’t get used up upon picking a bonus; the score just serves as a requirement for you to be able to select the bonus. There are three bonuses that use the score requirement:

The score requirement for Parry Impact increases per level that you are in, while the other bonuses’ requirements stay the same.