A guide on how to complete the Petranaki Panic challenges in LEGO Star Wars The Skywalker Saga. 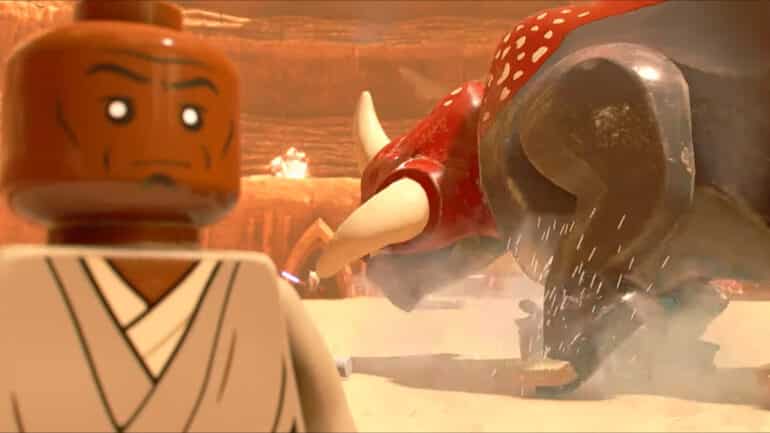 Petranaki Panic is one of the main missions in LEGO Star Wars: The Skywalker Saga where Anakin, Obi-Wan, and Padmé are sent into the middle of the Petranaki Arena to be executed. They have to look for a way to escape before they get trampled on by the beasts rampaging in the arena.

In this guide, we will look into the tips and tricks on how to clear all challenges of the Petranaki Panic mission.

How to Unlock the Petranaki Panic Mission?

To unlock the Petranaki Panic mission, clear the first three missions in Episode II: Attack of the Clones.

There are three challenges in the Petranaki Panic mission which have their own conditions:

Completing all challenges will reward you with a Kyber Brick.

In Their Heads! Challenge

You will have to release the yourselves from the chains first by climbing up the poles an hitting the target up top to detach the chains. Use a Jedi like Anakin or Obi-Wan or a character from the Dark Side to influence one of the beasts and control them. Then, just run towards any of the other beasts and attack them to complete the challenge.

If you are finding it difficult to influence the beasts, try to hold down the Triangle/Y button longer until they are affected by the mind trick. Also, try to round make the beast stay near each other so that you won’t run into the issue of going out of the mind trick’s range.

Rumble in the Arena Challenge

Find the Reek, or the big beast with horns and on all fours, and get close to it to make the Mount option appear. Once mounted, run around the arena while attacking all the drones that spawn in until to have destroyed enough to complete the challenge.

You will have to defeat all three of the beasts for Jango to arrive and for the droids to spawn in, but another Reek will spawn in a few moments later for you to be able to do the challenge.

Wait for Jango to fire one of his homing rockets and then once it flies close, use the Force of a Jedi or Dark Side to capture it. You can then aim at an enemy before releasing the rocket at them. Only one enemy has to be hit by the rocket to complete the challenge.

Also check out our guide on how to get all Petranaki Panic Minikits in LEGO Star Wars The Skywalker Saga.

Check out this video by Gaming with Abyss showing how to complete the challenges in the Petranaki Panic mission: