A complete guide to LEGO Star Wars The Skywalker Saga All Minikit Locations in Episode 2: Attack of the Clones. 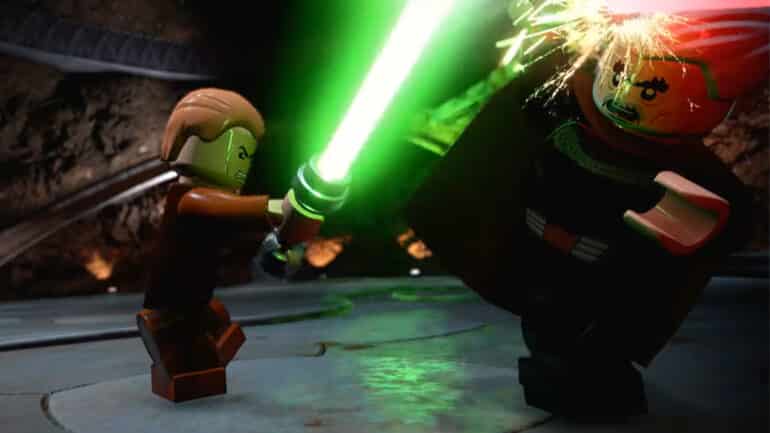 This guide will show you where to find all LEGO Star Wars: The Skywalker Saga Episode 2: Attack of the Clones minikit locations. Minikits can be challenging to locate since some of them can be hidden really well in LEGO Star Wars: The Skywalker Saga. They are worth it to find though as collecting all five in each level rewards you with a ship to use in free play mode.

The game actually allows you to buy hints in the form of “Rumors” which cost 30,000 studs each. Though the expensive cost of Rumors can be minimized by purchasing certain upgrades. If you’ve played through a level and are having issues finding a particular one, a rumor for the remaining minikits will be available to purchase on your holoprojector.

But this guide will show you all minikit locations in Episode 2 so you don’t have to waste studs in finding them for yourself. There are a total of 25 minikits in Episode II: Attack of the Clones.

A Wrestle With Wessel

This minikit can be found surrounded by electrical currents. This comes right after finishing the final power coupling gate just before the section is over. The electrical currents won’t harm you so you can drive over and collect the minikit.

This minikit requires you to destroy all the hologram minikit projections during the city chase sequence. After you’ve destroyed them, the minikit is yours.

Fresh Off the Van minikit

This minikit can be found after destroying some cargo carried by a forklift early into the level.

Rumor: “No time to wait for this delivery!”

This minikit is cleverly hidden behind a large minikit hologram projection in the middle section of the city chase sequence. Fly through the hologram to grab the minikit.

Rumor: “That minikit hologram looks like it could be hiding something… But what?!”

This minikit requires you to destroy all the advertising boards in the final parts of the city chase sequence. You can do this easily by prolonging your fight with Wessell.

Rumor: “Too many ads around here… Someone should do something about that!”

After getting all A Wrestle With Wessel minikits, you will get the “Naboo Royal Cruiser” as a reward.

The Hunt For Jango

This minikit requires that you destroy five satellites in the level.

Rumor: “Those satellites belong to the Trade Federation on Geonosis. Wipe them out!”

This minikit is inside a small comet which you have to blow up to collect the minikit inside.

Rumor: “What an oddly-shaped asteroid…”

This minikit can be found underneath some larger asteroids in the level. You might have to look around the level to find it.

Rumor: “Mind how you go around the larger asteroids…”

This minikit can be found inside the largest asteroid. You have to fly through its tunnels to find it.

Rumor: “Only capable pilots can navigate asteroid tunnels. And only capable-r pilots can find goodies hidden inside!”

This minikit can be found floating near one of the five satellites.

Rumor: “Eyes peeled for anything of value in that asteroid field…”

After getting all The Hunt For Jango minikits, you’ll get “Jango’s Starship” as a reward.

This minikit is on the production floor where new droids are being assembled. Keep your eye on the assembly line for when the minikit passes and then shoot the machinery so that the collector drops down so you can grab it.

This minikit is further away from the droid production floor where you’ll find a robot arm painting the cast of LEGO Star Wars. Wait for the machine to paint a minikit before blasting the painting and using the parts to build one yourself.

Rumor: “Such amazing artwork is too good for this world. You’ll have to break it!”

Rumor: “This droid is never going to drop anything without some interference…”

Rumor: “Sometimes you’ve just got to go against the flow!”

Rumor: “While you’re here, why not fix up some of this dodgy machinery?”

After getting all the Droid Factory minikits, you’ll get the “Jedi Starfighter” as a reward.

This minikit is behind the large steel gate which requires you to use one of the androids to decode the gatekeeping machine. You can use R2D2 to decode and open the gate and then grab the final minikit.

Rumor: “There must be a way to open that main gate…”

This minikit can be acquired after destroying the five mini-castle in the level.

Rumor: “Looks like someone’s had some fun in the sand. Ruin it!”

Out of Sight, Out of Mind minikit

This minikit can be found in the arena inside on of the many alcoves surrounding the area. You need a scavenger tool to break down the bars and grab the minikit.

Rumor: “Something’s stashed behind one of the entrance doors.”

This minikit requires that you shoot down five floating targets. There is an object next to steel door that you can destroy with explosives to rebuild as a turret.

Rumor: “A turret can be used for more than taking down the arena creatures!”

This minikit can be found behind some steel bars on the other side of where the second minikit is located. You need a character who can use explosives to break down the bars and get the minikit.

Rumor: “If the door is silver, there must be something even better behind it!”

After getting all the Petranaki Panic minikits, you’ll get the “Republic Assault Ship” as a reward.

The Battle of the Jedi

This minikit is in the first area of the level, look around for the first point to shoot the net launcher at and then use the environment to climb your way to the net. You need a character like the Scavenger that can use a net launcher to get to first minikit. You’ll have to do some platforming to get to the top which has the minikit.

For the Gold Digger minikit, once you get to the second area of the level, the one with the ravine beneath you, there is a golden item sticking out from the wall. Find that item and then use a character with a powerful blaster to destroy the gold exterior and get the minikit underneath.

Rumor: “Make use of high-powered weapons to retrieve this minikit!”

Once you’re inside the dark cave stairs, look for a door that can be destroyed by a scavenger character. This minikit is inside this location.

Rumor: “These caves are just begging to be scavenged…”

This minikit is in the same area with the golden pipes, there is an Imperial console where you need to insert the pattern which will give you the bricks you can use to construct a turret. After construction, four enemies will spawn which you’ll have to take out before getting the minikit.

Rumor: “There must be a way to deal with the infestation in the hangar…”

There is a minikit in the area with golden pipes that is hidden behind some furniture. You’ll have to switch to a Force-sensitive character to move items around and grab the minikit.

Rumor: “There’s bound to be some good loot among all that loose cargo in the hangar!”

After getting all The Battle of the Jedi minikits, you’ll get the “Count Dooku’s Solar Sailer” as a reward.

That’s it for LEGO Star Wars The Skywalker Saga All Minikit Locations in Episode 2: Attack of the Clones. You can check out our other LEGO Star Wars guides you might be interested in.

Check out this Youtube video from Game Guides Channel where it’s shown where you can find all minikits for the Hunt For Jango level.