A guide on the Scavenger Class in LEGO Star Wars The Skywalker Saga. 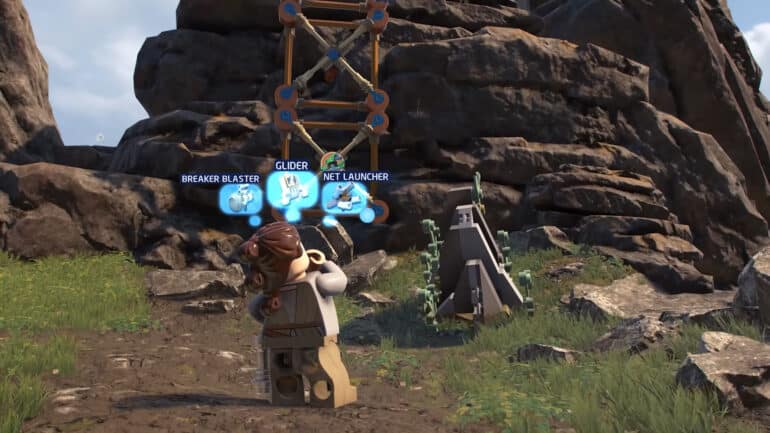 The Scavenger Class is one of the playable classes in LEGO Star Wars: The Skywalker Saga. Characters in this class are known to make their tools and gadgets out of the scraps and spare parts that they have scavenged. Despite being makeshift in nature, their gadgets give them abilities in the game that are quite indispensable and are a must to unlock as soon as possible.

In this guide, we will talk about how to play as the Scavenger Class, as well as how to unlock their tools and use them when they are needed.

How to Use the Scavenger Class in LEGO Star Wars The Skywalker Saga?

The Scavenger Class are most often used to open new paths for traversal with the help of their tool abilities. New obstacles have been introduced in the game that can only be surpassed with the help of Scavengers, like high walls, wide gaps, and cracked walls.

All Scavenger Abilities in LEGO Star Wars The Skywalker Saga

These are the abilities or tools that Scavengers have at their dispersal:

How to Unlock Scavenger Abilities in LEGO Star Wars The Skywalker Saga?

To unlock the Scavenger Abilities or tools, you must play Episode VII: The Force Awakens. Make your way through the level until you reach the mission “Scrap for Scraps” in the Nima Outpost. In this level, you will be able to find the blueprints of all three Scavenger tools which you can use as you grab them.

The Net Launcher can be found on a crafting table on the northeast side of Nima Outpost. Interact with the table to get the tool. Then, hold the Circle or B button to bring out the tool selection menu and select the Net Launcher. Press L2 to aim the launcher at an X on a wall and press R2 to deploy a net.

Climb the wall next to the first crafting table with the help of the Net Launcher, and then climb the ladder to reach the next platform where the Glider blueprint is at. Interact with the blueprint to craft the Glider tool. Step near a ledge with the glide marker, hold the circle or B button on your controller and select the Glider. Press and hold the X or A button to jump and glide, and then release the button once you have reached your destination.

Upon getting the Glider, glide to the next platform and push the crate off the platform to break it. Go down and rebuild a trampoline using the broken pieces. Switch to BB-8 and jump on the trampoline to get to the high platform, and then use the grappling hook to reach the platform above it. Interact with the terminal to bring the ladder down, and then switch back to Rey.

Climb up the ladder and then Glide towards the next platform where you will find the third blueprint. After getting the blueprint, go through the tool selection again and select the Breaker Blaster. Press the L2 to aim and R2 to shoot.

After getting all three, just play through the entire mission to fully unlock the tools and let your other Scavenger Characters use them.

How to Use Scavenger Abilities

After unlocking Scavenger Abilities in LEGO Star Wars The Skywalker Saga, you may access them from the Tool menu when playing as a Scavenger by pressing Circle or B button at any time. Although Scavenger Tools can be used indefinitely, hitting the Circle or B button again will switch out a tool for another. Then press the X or A button to use any one of the three tools you see listed below for the following uses:

Upgrades can be done in order to make the most of the Scavenger Tools, such as:

There’s also the Crafty upgrade which lets you change the color of your tools from the available color schemes. All tools can be upgraded thrice per upgrade and these upgrades cost studs and Kyber Bricks.

These are all the unlockable Scavenger characters in the game:

Note that Rey has variants that are under different classes, such as the Jedi and Dark Side. Make sure to pay attention to the class when selecting. And for unlocking the Jawa, to unlock the side quests listed above, you must finish the Dodgy Dwellings puzzle in Tuanul Village on Jakku, complete Revenge of the Sith story campaign, and visit the following locations at least once during the campaign:

Check out this video by AfterGames showing how to unlock all three Scavenger Tools: