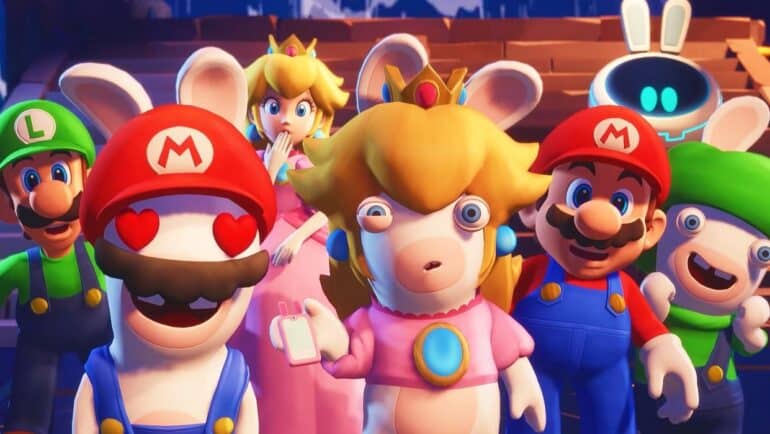 With the game letting you control a team of iconic Nintendo characters and the chaotic Rabbids, a Mario + Rabbids Sparks of Hope character tier list may be on your mind. In this game, you’ll be building your team to battle against the forces of Cursa who are siphoning the titular Sparks from different worlds bringing chaos to the galaxy. This guide will show you our thoughts about who the best to take with you in combat in a tier list of Mario + Rabbids Sparks of Hope characters.

There’s only around 9 playable characters in the game. And you’ll unlock them as you progress through the Main Quests in Mario + Rabbids Sparks of Hope. We’ll try to explain why certain characters are in higher tiers than others.

Despite being known as the second banana all his life, Luigi has really stepped up in this game putting him at the top of our Mario + Rabbids Sparks of Hope character tier list. Luigi has incredible range, allowing you to play him as a sniper. He’s even able to get past obstacles other wouldn’t be able to shoot through thanks to his Ghost Bullet.

When placed in high ground, Luigi can be really deadly. Investing in his Critical Hit Damage and High Ground will see you picking off enemies from a distance one-by-one.

Edge has the ability to quickly traverse around the map, dashing through enemies, and punishing them with close quarters melee hits. She can mop the floor with any enemy squad sticking together thanks to her attack chains which will damage multiple enemies at once.

Since Mario + Rabbids Sparks of Hope do have missions where you only need to reach an exit, Edge can makes those a light jogging exercise at most.

Rabbid Mario is a bruiser who can wipe out enemies in front of him in a large cone that hits them even behind cover. This makes Rabbid Mario an incredibly strong offensive character against well defended areas. This Rabbid can tank, take hits, and hit back just as hard.

Your best placement of Rabbid Mario is on the front lines because thanks to his Counter Blow, he can hit back against any enemy in range who hits him with their weapon. Investing in the right skills, such as Punch Frenzy, will only make him more deadly.

Another for our offensive line in this Mario + Rabbids Sparks of Hope character tier list, it’s the main man himself, the titular Mario. His ability to target two enemies in a single turn gives him an edge but it’s his ability to hit targets who are hard to reach are really what make him a great pick.

Mario’s Hero Sight also makes him good for holding down points. Any who try to run past him will be gunned down before they can even reach their destination. A lot of his better abilities lie with his Jump Shot which allow him a bird’s eye view of his enemies and even do his signature stomp on them if you’re willing to invest.

Rabbid Peach has an irreplaceable ability to heal her allies which puts her pretty high on this Mario + Rabbids Sparks of Hope character tier list. For long term battles, especially against bosses, Rabbid Peach can be essential. Her active ability to heal can further be boosted with the right investments into her skill tree.

But Rabbid Peach isn’t all just support, her weapon allows her to fire rockets upwards in an arch that negate the use of half covers for enemies.

The only issue is that she’s competing with Rabbid Mario who’s better in fighting up close. Peach has a wider cone for her shotgun AoE damage, however that damage does drop the further away it gets. While Peach’s shotgun can’t phase through enemy barricades, she can destroy them outright.

With an incredibly high health, Bowser is fit for a Tank playstyle. And that’s only cemented with his bazooka which does AoE damage and obliterates enemy cover. By far, Bowser’s most notable ability is his active one which summons mechakoopas which seek out enemies before exploding.

Bowser is a great defender, but he as good as he is as a Tank he also moves like one. Bowser has a short movement range which means that other characters can finish the job off before he can even get there.

Rabbid Rosalina is notable for her ability to inflict Stasis on nearby enemies, preventing them from taking any actions. It isn’t a bad ability, but there are plenty of others in this Mario + Rabbids Sparks of Hope character tier list that have more utility.

Rabbid Luigi has his frisbee which can hit multiple enemies at once by bouncing off of them. It’s a decent weapon, but the reason why Rabbid Luigi is at the bottom of this Mario + Rabbids Sparks of Hope character tier list is because his Exhaust ability, which weakens enemies, isn’t an alluring pick.

If you’re looking for AoE picks, then either Peach or Edge can perform better. Rabbid Luigi doesn’t have the arsenal or abilities that put him above anyone else.

Check out this Youtube video from BeardBear who shows all cutscenes in Mario + Rabbids Sparks of Hope.